Worth adding to the well-deserved praise accorded New Journalism pioneer Tom Wolfe since his death last week is an incident when he was a cub reporter still in his 20s who stood up to -- and prevailed -- against an ambitious senator elected president only two years later.

Wolfe was working as a general-assignment reporter in Springfield, Massachusetts in 1958 after finishing his dissertation in American studies at Yale when Senator John F. Kennedy came to the small city an hour west of Boston and spoke before two dozen Springfield business owners and the mayor.

High on their list of concerns was the distinct possibility that the federal government might close the local armory, a major manufacturer of rifles for the US military.

Four decades later, while on book tour after publication of his novel A Man in Full, Wolfe recounted what happened in an appearance on The Connection radio show in Boston with host Christopher Lydon --

LYDON: I want to go back to this, the novelist as reporter. There's a wonderful picture in Time magazine (Lydon referring to a November 1998 cover story on Wolfe), I'd never seen it before, 1958, you and John F. Kennedy, 40 years ago, a politician on the make and a newspaper reporter from the Springfield Union on the make. You're a Yale Ph.D in American studies, doing reporting. And it's been, you know, 40 years now that you've been just watching this stuff. How do you do it?

WOLFE: Well, that particular scene that you mentioned, it was taken outside the Springfield armory in Springfield, Mass. The armory used to be a major manufacturer of rifles, particularly for the United States military. And Kennedy when I interviewed him was Senator Kennedy, the year was 1958 ...

LYDON: Getting re-elected that year ...

WOLFE: ... yes, right, and he had been asked to come to Springfield to see if he could do something to keep the government from getting rid of the armory. The armory had become kind of redundant by now, and so he met with a group of Springfield businessmen and the Springfield mayor, a man named Danny Brunton, and he was saying to them, this is the gist of what he was saying, he was saying, look, we've got to be just like these Southern politicians, these Southern senators and congressmen, they just grab whatever they feel like it of government money and they'll make a gym for a university and name it after themselves, but that's the way you have to play the game and that's what we have to do to save the armory. 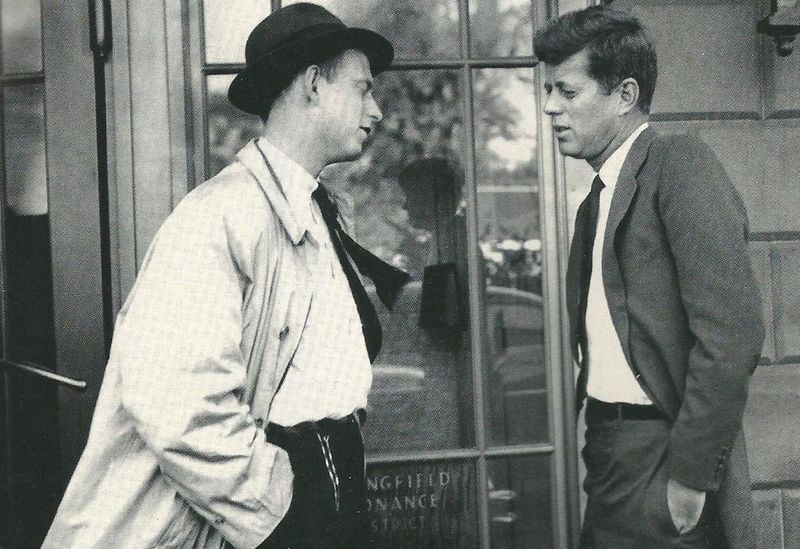 At which point one of his aides said, senator, did you realize that there's a reporter in the room (Lydon laughs) and that was me. There was one reporter, me. And (Kennedy) said no, then he turned to me and he said, this is all off the record. So rather timorously I said, well, there's 25 Springfield business leaders here and the mayor, I don't see how I can keep it off the record. And he said, well, it's off the record.

So afterwards he came up to me and took me outside, he said look, I know your publisher, I know your editor really well ...

WOLFE: ... I know that they would never want anything like this to appear in their paper and jeopardize the future of the armory. So I said, my hands are tied, I'm sorry, this is something that has happened in front of a lot of influential people in Springfield. So I went ahead and wrote the story and about a week later, Larry O'Brien, who later became postmaster general of the United States, one of Kennedy's longtime aides (and Springfield native), came to the Springfield Union where I worked and complained to the editor that I had violated an off-the-record embargo and in effect tried to get me fired. But fortunately my editor was a Republican and he seemed to rather like me and so it didn't cost me. But that's what we were talking about in that picture.

A reminder to liberals who've deluded themselves into believing that politicians playing hardball with reporters is a recent phenomenon. To his credit, and not surprising to those of us who greatly admired his work, Wolfe resisted the much-ballyhooed Kennedy charm that left so many of his media cohorts weak in the knees.


Incidentally, the man Kennedy sent to do his dirty work is remembered today for a different reason -- it was Larry O'Brien's office that was targeted by Watergate burglars in June 1972.