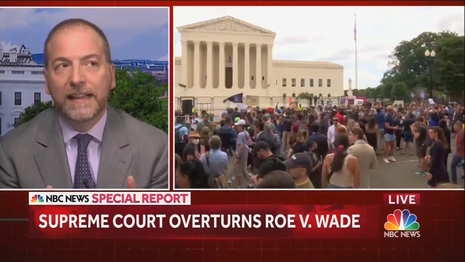 When the Supreme Court overturned Roe v. Wade the leftists in the media became apoplectic as they angrily decried the conservative Justices and projected that America would turn into a country where women had no rights.

In their crazed view a “rigged” Supreme Court that wasn’t “representative” of the “country” had “thrown acid into the faces” of abortion supporters and turned America into a land where a women in red states would be considered “property” and predicted with certainty that “women will die.”

The following are just some of wildest and angriest outbursts and tweets from journalists post the Supreme Court decision to throw the abortion issue back to the states:

First up, is a video montage by NewsBusters media editor Bill D’Agostino:

The Court Is “Rigged,” Not “Representative” of the “Country”

“There are no more black robes….the robes are red and blue….What’s striking about Roe is it’s the first time in my lifetime that I can think of where a Supreme Court took away a right…I can’t think of another court in the last hundred years that has done this. A right that was there, taken away….We’re used to the Supreme Court granting rights….Making it [the Court] be viewed as an extraordinarily partisan institution….There really is a lot of people who believe this is a rigged Court....This Court’s make-up isn’t quote ‘fair and square.’ It isn’t really representative of where the country is and even was.”
— NBC’s Meet the Press moderator Chuck Todd on NBC News live coverage of Supreme Court abortion decision, June 24.

Host Martha Raddatz: “On Friday morning, women in this country like they have for nearly 50 years, woke up with a constitutional right to abortion, a right enshrined by the Supreme Court’s 1973 decision in Roe v. Wade and reaffirmed again and again. But just after 10:00am on Friday a legal earthquake, the Court stripping women of that fundamental right….Abortion is now a matter for the states and Congress. A decision for voters and their elected leaders rather than between a woman and her doctor.”
…
Correspondent Terry Moran: “This is the most consequential Supreme Court decision in decades. It changes the status of American women as citizens of the United States and as citizens of their states. That’s the big picture. But let’s not mince words, women will die because of this ruling.”
— ABC’s This Week, June 26.

“Voters on the right never give up. They don’t get tired. Decade after decade they lost and lost and lost until they won and in the process….took over state houses, state senates and governorships. So they are positioned to now take ownership of about half the women in this country. 48 percent of the women now live in red states. So you’re talking about the fact that those state legislatures, at least according to the Supreme Court, the women in those states are their property and they can do whatever they want.”
— Host Joy Reid on MSNBC’s The ReidOut, June 27.

“It’s hard to imagine the Republican Party surviving this. Between anti-abortion, anti-LGBTQ, book banning, anti-democracy — I mean, add all of the regressive bullshit — garbage, sorry, to this — I don’t take that back. Add it all together and I don’t know who’s left in the future — in future generations to be drawn to this party?...For the first time a right was taken back. I can’t imagine how Republicans message to new voters and don’t just keep shrinking and condensing.”
— CNN political commentator S.E. Cupp on CNN’s New Day, June 27.

“An AR-15 Has More Rights Than a Woman Does”

“Good morning everybody and welcome to Gilead. Oh, I mean The Cross Connection. Today, for the first time in 49 years, American women are waking up with less rights than we had yesterday….The majority of Americans did not want the Court to overturn Roe v. Wade. A majority of Americans. But four men, who will never bear children, and one Handmaiden, decided for an entire country that their Christian doctrine is the only way….A woman’s right to choose is a human right….but in America, where guns are the leading cause of death for children, an AR-15 has more rights than a woman does.”
— Host Tiffany Cross on MSNBC’s The Cross Connection, June 25.

“This decision was intended to throw scalding acid into the face of people who feel strongly about abortion rights. It was intended to shock….[The abortion decision] pushed our beloved, bleeding country in the direction of almost civil war over the issue of abortion…. This is not a Supreme Court trying to heal, this is a Supreme Court of a radical majority. Essentially saying, ‘look at how much power we have even though we are about a third in terms of the country in terms of sharing our views. We’re going to just shove it in your face.’”
— MSNBC presidential historian Michael Beschloss on MSNBC’s The 11th Hour with Stephanie Ruhle, June 24.

“You could argue that two of the three appointees that Donald Trump had were sort of done out of bounds, right? The first one was a vacancy that occurred basically with nearly a year left on Barack Obama’s term. And then....whatever precedent Mitch McConnell came up with to somehow say that couldn’t be filled until after the presidential election....when Ruth Bader Ginsburg died, essentially a month before the 2020 election....There’s a lot of folks who feel as if [Neil] Gorsuch and [Amy Coney] Barrett, two of the five on this opinion, were sort of there unfairly....You really can’t help but look back at 2016. That election and the entrance of Donald Trump and his politics. He shattered a lot of stability we had in American society. He has been the lynchpin of shattering stability on reproductive rights, stability on immigration, stability in some ways obviously on the democracy. We’re in a rough place as a country and society. We’re not just polarized. We’re divided in ways that feels so fundamental you’re not sure how to bring each other back. We are divided in our information silos….We’re a tinder box now. I think our elected leaders, particularly on the right, are putting blinders on and not fully appreciating what’s been unleashed on our society.”
— NBC’s Meet the Press moderator Chuck Todd on NBC News live coverage of Supreme Court abortion decision, June 24.

“It could be argued that today’s Democrats are too weak, too fragile, too woke, too elitist, too disconnected from the realities of working Americans, and yet the Democratic Party is the world’s last best hope against fascism against an extreme autocratic anti-woman, anti-gay, anti-contraception, anti-freedom collection of fascists who dominate the Trump wing of today’s Republican Party….They’re claiming control over your bodies, your health, your life…..What does Donald Trump’s America look like?...It looks like a 13-year-old rape and incest victim being ordered by the state to have a forced birth of her rapist’s baby….For all the Democratic Party’s flaws, they’re the only party that can stem this continued rise of fascism. Register and vote. Work toward an overwhelming majority that can protect your body, protect your freedoms, and just may save our country.”
— Co-host Mika Brzezinski on MSNBC’s Morning Joe, June 27.

“Think about this in the coverage in the last couple days….All these split screen images. One person who’s cheering, another person who’s jeering. I see tears on one side and then I see celebrations on the other. That 50/50 split, isn’t that actually misleading, isn’t that actually distorting?...New CBS polling….Only nine percent of Americans say it should be completely illegal in their state.”
— Host Brian Stelter on CNN’s Reliable Sources, June 26.

“This decision is really seen as devastating to so many women across this country by — from people who are, of course, advocates of abortion rights. I also sat down with Shannon Brewer, who is director of the Women’s Health Organization in Mississippi. That’s the clinic at the center of the decision. She told me that she believes women’s lives are going to be put at risk now.”
— Correspondent Yamiche Alcindor on NBC News live coverage of Supreme Court abortion decision, June 24.

“Legitimacy of the Court” Will Be “Eroded”

America Not in “Stellar Company”

“According to the Center for Reproductive Rights, the U.S. joins only three countries: El Salvador, Nicaragua, Poland, that have chosen to roll back abortion rights since 1994. That isn’t exactly stellar company.”
— Host Jim Acosta on CNN Newsroom, June 25. 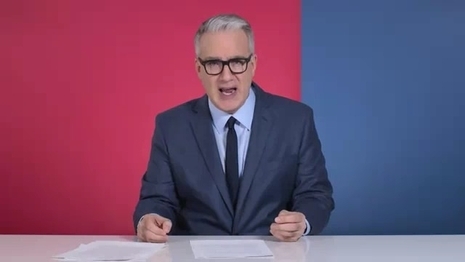 “These theocratic creatures must be indicted on charges of lying to the Senate during their confirmation hearings. Their actions have forfeited their rights to remain on the public stage, and ended the viability of the Supreme Court as currently constituted. It must be dissolved.”
— June 24 tweet by former MSNBC host Keith Olbermann.

“The Supreme Court is no longer legitimate. THIS, below, is the correct response today. SOME Democrat: get up there and say what Real America is saying right now and use this damn language: FUCK THE SUPREME COURT AND FUCK THE REPUBLICAN-FASCIST PARTY.”
— June 24 tweet by former MSNBC host Keith Olbermann.

Women Now Considered “Property” and Will Be Executed in “Red States” 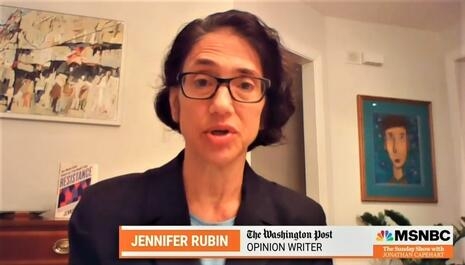 “A state can now execute a woman for refusing to submit to a forced birth even if the ‘abortion’ is within hours of conception. Barbarism.”
— June 24 tweet by Washington Post columnist Jennifer Rubin.

“Welp. The Christianist majority on the SCOTUS has made it clear that they intend to return this county to its 18th century state and they are accomplishing their goal. We will now have free states for women, and states where women are returned to their 1700s status as property. LGBTQ people in Gilead states will live in fear and silence. They’ll be afraid to work as teachers. And red state teachers will be afraid to tell the truth about U.S. history lest they stray from the white nationalist line. And of course there will be lots and lots of guns, and no separation of Christian* church and state (other religions are out of luck.) We have raced backwards, against the tide of history. The Republican Party did this. Gilead states are doing this. It’s time to wake up, y’all.”
— June 24 tweet by MSNBC’s The ReidOut host Joy Reid.