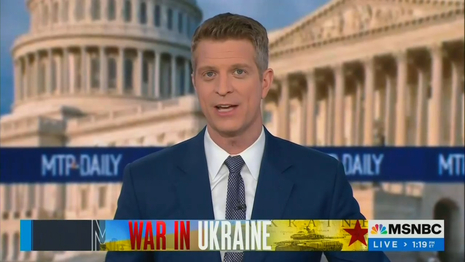 Exasperated lefty journalists are actually whining about why Joe Biden isn’t doing better in the polls asking absurd questions like why isn’t he getting the same kind of wartime “bounce” that Ukranian President Volodymyr Zelensky is getting?

This past month also saw more gnashing of teeth by lib hosts, reporters and pundits at “Republican manhandling” of Judge Ketanji Brown Jackson as MSNBC crazy Elie Mystal continued his insane claim that the GOP is trying to get her killed.

Hollywood lefty elites joined in on the attack on Republican governors as well. Late night talk show host Jimmy Kimmel blasted Ron “Dickhead” DeSantis and actress Sally Field seemed to threaten DeSantis and Texas GOP Governor Greg Abbot, as she raged: “If you see them coming toward me, those two governors specifically, lead me out of the way because I cannot be responsible for what I would do.”

The following are some of the worst outbursts from lefty journos and celebs over the last month:

MSNBCer Whines: Why Isn’t Biden Getting a War “Bounce” In the Polls?

“President Biden’s not getting a [Ukrainian President Volodymyr] Zelenskyy bounce. And when you look at the polling, it’s kind of fascinating….Biden’s wartime policies are popular, but he’s not getting the credit for them….Why doesn’t Joe Biden get credit for doing the popular things Joe Biden does?”
— Substitute host Garrett Haake on MSNBC’s MTP Daily, March 14.

“What a tragedy. A cameraman died covering the war for a TV network that airs a pro-Putin propagandist as its top-rated primetime host.”
— March 15 tweet by New Yorker staffer and CNN global affairs analyst Susan Glasser, in response to news that Fox cameraman Pierre Zakrzewski was killed in the same attack that wounded Fox correspondent Benjamin Hall.

Fox News to Blame for Putin Invasion of Ukraine?

“From the beginning, [Vladimir] Putin has been a warmonger with a sour face. He obviously thought he could run over Ukraine while President Biden was under constant attack by Fox News and ever more poisonous right-wing political organizations.”
— Former NBC Nightly News anchor Tom Brokaw on MSNBC’s Morning Joe, March 29.

“These attacks can put her [Ketanji Brown Jackson] life and the life of her family and children in danger….We know that they have something particularly that they are angry at her about….It’s the fact that Ketanji Brown Jackson sentenced Edgar Welsh, who is the guy who went to Comet Pizza in Washington D.C. looking for the pedophile ring to do violence. ….So the Q-Anon people are angry at her already….It’s designed to put her life in danger….If you were a Q-Anon person watching the confirmation hearings, you know where Ketanji Brown Jackson’s family where they work, where the kids go to school….So they’re giving them all the information that they need….to do real harm and real bad things to this person, whose only crime, at this point, is being a black woman.”
— The Nation correspondent Elie Mystal on MSNBC’s The ReidOut, April 5.

Angry at “Republican Manhandling” of Jackson

“The Republican manhandling of Judge Ketanji Brown Jackson this week was convincing evidence that the Senate’s Supreme Court confirmation process is irredeemably broken. The aggressively hostile interrogation of Judge Jackson, featuring political dog-whistling and relentless re-litigating of Supreme Court feuds of the past, marred what could have been not only a reset for the Senate, but a significant national moment in seeing the first Black woman ascend to the pinnacle of American jurisprudence with strong support.”
— March 24 New York Times front page story by chief Washington correspondent Carl Husle, “The Respectful Supreme Court Hearing That Wasn’t”

This Is Where The Media Is Now

“Something I discovered, a lot of younger viewers may not know, Clarence Thomas was actually married to a black woman, he has a son named Jamal, and now with his new wife, with Ginni Thomas, his, he’s always been problematic in his thoughts, he seems to have fallen deeper into the sunken place with this woman running a puppet regime it appears, being, aiding Donald Trump and breaking the law. How is it possible that Judge Thomas can continue to serve on the Supreme Court?”
— Host Tiffany Cross on MSNBC’s The Cross Connection, April 2.

“In Texas, Governor Greg Abbott has found it helps him politically to be cruel to transgender children. To deny their very existence. And so the recent order he sent state officials is already hurting these children, their families, and care providers. This order takes what used to be normal care for trans kids and classifies that care as child abuse in the eyes of the state.….Forcing state employees who work in family protective services to investigate these families for child abuse….This barbaric order is just a few months old, Governor Abbott has been trying to push it for nearly a year….Child protective services workers in Texas are quitting en mass to avoid complying with the order….We will see investigations that get closed where intervention could’ve occurred, and children will die in Texas….Greg Abbott’s order is child abuse.”
— Host Chris Hayes on MSNBC’s All In, April 11.

“When Governor [Kim] Reynolds of Iowa gave the response to president Biden’s State of the Union address, she said, among others things, Republican governors and legislators are showing what conservative leadership looks like and, quite honestly, it looks hideous. It is horrendous. The Don’t Say Gay bill is going to hurt LGBTQ kids and their families. The Stop Woke Act, all to protect from discomfort and anguish, white kids from learning about the true history of our country….This is the template that Governor DeSantis is following, that Republican governors are following….Quite honestly, if their constituents aren’t white, male, cisgender, heterosexual, it seems like they have no room for anyone like that in their states.”
— Washington Post columnist Jonathan Capehart on PBS NewsHour, March 11.

Nothing to See Here, Move Along

“It seems pretty clear that Hunter Biden was trading on his father’s name to make a lot of money. He’s had a difficult life. But until you make, someone makes a nexus between what Hunter Biden has done, and official activities of Vice President Biden or President Biden, it’s a not pretty picture, but it’s really not much of public import.”
— White House correspondent John Harwood on CNN New Day, March 30.

“Just say, ‘I don’t trust a black woman to do the job.’ Because I know that y’all didn’t have these same issues with Amy Coney Barrett.”
— Co-host Whoopi Goldberg on ABC’s The View, April 4.

Co-host Joy Behar: “The laugh [Vice President Kamala Harris’ inappropriate laugh during press conference with President of Poland] got them….Some on the right say that this was humiliating….I personally think if she was a guy, they would never say it because they made fun of Hillary’s laugh, but I don’t see them making fun of [former Vice President Mike] Pence’s laugh.”...
Co-host Sunny Hostin: “This is based in racism. This is based in misogyny….The right didn’t talk about his [Pence’s] handling of the COVID epidemic….or the AIDS epidemic which I think led to, you know, thousands and thousands of deaths. What they’re talking about is her laugh.….She is prepared, she is seasoned. Abroad she gets wonderful marks across the board, but this is just something that I think happens to women and especially black women.”
— ABC’s The View, March 11.

“In Florida yesterday, that controversial Parental Rights in Education bill, also known as the ‘Don’t Say Gay’ bill was signed into law….The bill itself is ridiculous. It bans kindergarten through third grade educators from addressing topics of sexual orientation or gender identity….Under the new law, a teacher can’t explain to a second grader that their governor is a dickhead. That kind of language is not allowed anymore. It’s up to parents to explain that their governor is a dickhead….His pronouns are He and Haw. This really is frightening….I know it’s funny but can you imagine if this happened in the United States?”
— Host Jimmy Kimmel on ABC’s Jimmy Kimmel Live!, March 29.

“Those men who are doing that, and they’re mostly male governors who are doing it, are so backward, so ignorant and really just power hungry. I think it’s criminal. They’re so wanting to roll back the achievements and important progress for women, for Blacks, for the LGBTQ community. I can’t say enough horrible things about what I feel about those men. If you see them coming toward me, those two governors specifically [Texas Gov. Greg Abbott and Florida Gov. Ron DeSantis], lead me out of the way because I cannot be responsible for what I would do. Heidi [she addresses her publicist, who is in the room], do you hear me? Lead me away.”
— Actress Sally Field in the March issue of Variety magazine.