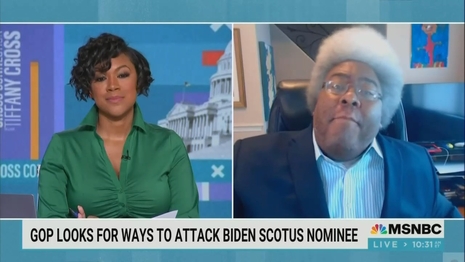 In the minds of liberal journalists, Judge Ketanji Brown Jackson was such a perfect candidate for the Supreme Court that ANY questioning of her case history by Republican senators had to be driven by racism.

Reporters, hosts, pundits and newspaper editors were so outraged they actually claimed Republican treatment of Jackson was worse than that of Justice Brett Kavanaugh (whose opponents falsely accused of rape) and that the GOP’s “Confederacy Crew” were asking questions that would get President Biden’s Supreme Court nominee “killed.”

The late night talk show hosts also joined in the pile-on with the likes of ABC’s Jimmy Kimmel calling the hearings the GOP’s “subtle racism jamboree.”

The following is a round-up of the worst takes from liberal journalists and late night talk show hosts during the Ketanji Brown Jackson hearings:

“What [Republican Senator] Josh Hawley is doing when he tries to do this is he’s trying to get her [Ketanji Brown Jackson] killed. He is trying to get violence done against a Supreme Court nominee. And we know this because when these people go off making their ridiculous claims about child pornography, we know that some of their people show up violently to do stuff, as happened to the New Hampshire pizza parlor.”
— The Nation justice correspondent Elie Mystal on MSNBC’s The Cross Connection, March 19.

“Here’s the thing, Josh Hawley is not backing down. What he is doing is dangerous, it is character assassination of a woman who is going to be confirmed.”
— Host Stephanie Ruhle on MSNBC’s The 11th Hour, March 21.

Host Wolf Blitzer: “What is your reaction to this exchange? Republican Senator Josh Hawley trying to paint Judge Jackson as somehow sympathetic to child porn offenders.”
Chief legal analyst Jeffrey Toobin: “This was really extraordinary. You have a judge here who has been on the bench for ten years almost. And we had the entire half-hour of Senator Hawley’s question about a single case where he got to recite the grisly details of, and say pedophilia over and over again. This is about appealing to the QAnon audience, this cult that is a big presence in Republican Party politics now.”
— CNN’s Situation Room, March 22.

“She was treated essentially like Anita Hill. She was treated like Christine Blasey Ford. Because she’s a woman, she could not act like [Supreme Court Justice Brett] Kavanaugh. And I think what that says to women, to women who are lawyers, to black women is that the standard for us is that we have to always behave as an adult. The standard for white men is they can behave as a child and still get as far as or further than we can. They sent that message very clear. [Republican Senator] Lindsey Graham, all the little mansplainers, all the little Confederacy Crew that really sounded like they were in the 19th century still.”
— Host Joy Reid on MSNBC’s The ReidOut, March 23.

Jackson Not Cruel Enough for Republicans

Host Gayle King: “I watched a lot of the hearings yesterday. It was very painful to watch. A lot yesterday afternoon. What can you tell us about the plan for the final day?”|
Correspondent Nikole Killion: “Well, the plan today is that Judge Jackson won’t be in the hot seat as a panel of experts testify after an emotional and exhaustive hearing with searing attacks on the first Black woman who is likely to be confirmed to the Supreme Court....Supreme Court nominee Ketanji Brown Jackson welled up on her final day of questioning….Relentless questioning over her sentencing record in child exploitation cases.”...
King: “It was so tough, I thought, yesterday to watch, regardless of how you feel about her. It felt so personal watching her being really attacked for something that has nothing to do with the job that she’s going to do.”...
Co-host Nate Burleson: “I think the word ‘attack’ is a fitting word here.”
— CBS Mornings, March 24.

“The word I would use for [Republican Senator] Tom Cotton was thuggish….I thought [Republican Senator] Lindsey Graham was screamy and weird….[Republican Senator] Josh Hawley, ridiculous….They’re claiming that they are the defenders of the integrity of childhood. They’re going to go after child pornography and rape. And they’re going to defend the integrity of childhood. [Supreme Court Justice] Brett Kavanaugh was accused, credibly, of rape and the victims were teenage girls and college students. High school and college students! So Josh Hawley, and [Republican Senator] Ted Cruz and Lindsey Graham and all the rest of you, and [Republican Senator] Mike Lee, and Tom ‘thuggish’ Cotton. You didn’t defend teenage victims of the man you gleefully put in a lifetime position on the Supreme Court. You don’t get to say anything about Judge Ketanji Brown Jackson. She bested you intellectually and you’re mad about it. Stay mad!”
— Host Joy Reid on MSNBC’s The ReidOut, March 22.

No “Red Flags,” Will Be Hard to For GOP To Paint Jackson as “Judicial Extremist”

CBS Evening News anchor Norah O’Donnell: “Do you see any hurdles after what you heard today?”....
CBS correspondent Jan Crawford: “I don’t see any red flags….They’re [Republican senators] gonna try to discern her judicial philosophy, to show that unlike the picture that we just saw that they think she will be some kind of judicial extremist. I think that’s going to be pretty hard for them to do.”
— CBS News live coverage of Ketanji Brown Jackson hearings, March 21.

“Confirmation hearings start on Monday for Judge Ketanji Brown Jackson....Nancy Cordes spoke to some of her oldest friends — oldest friends always tell the truth — who are not surprised by her success….You can always count on your girlfriends to get you through and support you and lift you up. Thank you, Nancy, that was really lovely.”
— Co-host Gayle King on CBS Mornings, March 18.

Co-host Robin Roberts: “We are talking with her [Ketanji Brown Jackson] lifelong friends sharing what they want us to know about their dear friend who’s on the cusp of history.”...
Correspondent Deborah Roberts: “They kind of pulled back the curtains on the life of Judge Jackson. They call themselves The Ladies during their college days, a tight group of friends who had each other’s backs during the college days. There were parties and fun moments, they say, but it was clear their spirited friend Ketanji, who had been a standout student, was going to go far….Their friend, they say, always has had the right stuff.”
— ABC’s Good Morning America, March 9.

“I was texting with one of her closest friends today and they told me yesterday was very, very emotional, but that they believe that their friend is like an Olympic athlete who has been training for this their whole — her whole life.”
— PBS Washington Week moderator/NBC News Washington correspondent Yamiche Alcindor on NBC News live coverage of Ketanji Brown Jackson hearings, March 22.

Judge Jackson So “Perfect,” Any Criticism is Racist

Co-host Whoopi Goldberg: “Just based on the people, the last three [Supreme Court Justices Amy Coney Barrett, Brett Kavanaugh, Neil Gorsuch] people they put in. You know, this is a woman [Judge Ketanji Brown Jackson]....who can outshine each and every one of those people.”
Revolt TV host Eboni Williams: “Very literally.”
Goldberg: “Her abilities are outstanding. I mean, she’s outstanding. So, you put in Amy Coney Barrett, you put in the other one, you know, and you’re questioning her?”
Williams: “But Whoopi, let’s not pretend we don’t know what this is about. You know what bus is always on time? The one that indicts the determinations of the qualifications of black women in this country. And so that bus is never late.”
Goldberg: “It’s never late.”
— ABC’s The View, March 18.

“Judge Ketanji Brown Jackson appeared before the Senate Judiciary Committee today. Unless something unexpected happens, the vote is expected to go along party lines. These hearings, they give a number of our Republican senators a chance to compete in one of their favorite events, the Subtle Racism Jamboree….She doesn’t need any Republican votes to get confirmed because the Vice President [Kamala Harris] is the tie-breaker….That would be the GOP’s ultimate nightmare. Having this decided by two black women whose names they can’t pronounce.”
— Host Jimmy Kimmel on ABC’s Jimmy Kimmel Live!, March 21.

“She said the fact that she was even nominated shows how far we’ve come as a country, and so some of the Republican senators on the committee have been hard at work to show how far we haven’t.”
— Host Jimmy Kimmel on ABC’s Jimmy Kimmel Live!, March 23.

“This is how low the United States government has fallen. We’ve gone from ‘Let’s put a man on the moon within the decade’ to ‘Maybe someday we can get at least one Republican to vote for a qualified woman.’”
— Host James Corden on CBS’s The Late Late Show with James Corden, March 23.