HYPERVENTILATING JOURNOS: Democracy Under Attack By Putin and GOP! 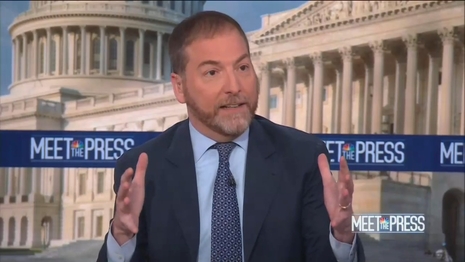 The heroic efforts of Ukranians to fend off Russia’s attacks reminded some in the media of Democrats fighting off Republican assaults on democracy here.

According to the likes of NBC’s Chuck Todd and Yamiche Alcindor, President Joe Biden “missed” an “easy” opportunity in his State of the Union Address to connect “the fight for democracy” in the U.S. and “freedom abroad” in Europe. Their colleague, MSNBC host Tiffany Cross blurted: “I look at what’s happening in Ukraine, and I see….democracy can be a fragile thing, and it feels a bit fragile in America right now” with the Republican Party bleeding “it by a thousand cuts with rampant voter suppression.”

ABC’s The View offered some particularly out-of-touch takes, even for that crew. They invited on The Nation justice correspondent and frequent MSNBC guest Elie Mystal to call the Constitution “trash” and co-host Joy Behar exasperatedly whined that the attack on Ukraine had messed up her vacation plans: “You just plan a trip….want to go to Italy for four years, and I haven’t been able to make it because of the pandemic, and now this.”

The following are some of the most obnoxious outbursts by lefty reporters, hosts and pundits from the past few weeks:

Host Chuck Todd: “There was one thing that surprised me about the President’s State of the Union was the lack of connecting the fight for democracy and freedom abroad, with the fight for democracy at home. Today’s Bloody Sunday, ok? On Selma, the Vice President’s there, going to march against the bridge….But were you surprised?”
Princeton Professor/MSNBC contributor Eddie Glaude: “I was stunned! I mean it was an easy kind of rhetorical move. Let’s defend democracy abroad and secure democracy at home.”
Todd: “And politically helpful. I mean, hate to be that crass about it but, right? It’s an easy political message.”
— NBC’s Meet the Press, March 6.

“We have our own democratic crisis here at home….Democracy matters and Ukraine is showing that. So of course we have our own election people — the Republicans in a lot of states trying to pull back the voter access to so many different Americans. So Democrats are….so eager for him [President Joe Biden] to also talk about voting rights….This idea of connecting what’s going in Ukraine to…how our democracy almost came to its knees on January 6th.”
— NBC News Washington correspondent/Moderator of PBS’s Washington Week Yamiche Alcindor on NBC News Now’s live coverage of President Joe Biden’s State of the Union speech, March 1.

“I look at what’s happening in Ukraine, and I see, you know, democracy can be a fragile thing, and it feels a bit fragile in America right now. We’re seeing, you know, the Republican Party bleed it by a thousand cuts with rampant voter suppression.”
— Host Tiffany Cross on MSNBC’s The Cross Connection with Tiffany Cross, March 5.

“There were a couple of missed opportunities [during President Joe Biden’s State of the Union Address] right? Like one, I would have made a one-to-one connection between the authoritarians that we’re fighting in Europe and the authoritarians that we’re fighting in Washington DC.”
— The Nation justice correspondent Elie Mystal on ABC’s The View, March 4.

Republicans Want to End the Voting Rights Lincoln Died For

“The last speech he [Abraham Lincoln] makes before he dies….is talking about extending the right to vote to African Americans who had fought in the war. He then loses his life because that speech was where John Wilkes Booth heard him give that speech and decided now it’s time to kill him. And here we are 150 years later and there are people in the country now trying to get the idea that voting rights should be pulled back, rather than pushed forward….This is the fight we have to be fighting. I think Lincoln would tell them ‘This is your fight right now. Voting rights is central.’”
— Presidential historian Doris Kearns Goodwin on CNN Newsroom, February 20.

“Swing voters, Trump/Biden voters, they seem to buy the idea that [Vladimir] Putin wouldn’t have done this if [Donald] Trump was President. How does the Democratic Party answer for that? I don’t buy that, I don’t think that that matches logic, but voters do.”
— Moderator Chuck Todd on NBC’s MTP Daily, March 4.

“Let’s face it, the world is paying attention because this is happening in Europe. If this was happening anywhere else would we see the same outpouring of support and compassion? Well, we don’t need to ask ourselves if the international response will be the same if Russia unleashed their horror on a country that wasn’t white and largely Christian. Because Russia has already done it in Syria. This is a teachable moment for us in the media.”
— Host Joy Reid on MSNBC’s The ReidOut, March 7.

“Uncle Joe Is Back” Makes People “Believe in Democracy”

“Uncle Joe is back. I thought he was being the leader. Listen, nobody believes in these American ideals more than Joe Biden….I was impressed with the energy….If you didn’t believe in democracy before, if you never heard of democracy and you just looked at the body language of this guy, this guy believed every word he said. And I think, I am proud tonight we have a leader like him.”
— CNN political contributor Van Jones on CNN live coverage of President Joe Biden’s State of the Union speech, March 1.

“Her [Supreme Court nominee Judge Ketanji Brown Jackson] credentials frankly sounded as if Mount Olympus decided to choose and give her each of the credentials and gave this great — almost a legal deity of sorts.”
— CNN senior legal analyst Laura Coates on CNN Newsroom, February 25.

“It’s going to be a non-story unless the Republicans make a critical mistake, which is to keep calling her [Supreme Court nominee Judge Ketanji Brown Jackson] a left wing whatever, which she is not. She has extraordinary credentials.”
— MSNBC host Andrea Mitchell on NBC’s Meet the Press, February 27.

Andrea Is In Denial

Senior Fellow at American Enterprise Institute Danielle Pletka: “First of all, there are four of you and one of me. I’m the only Republican sitting here. Hang on a second.”
MSNBC host Andrea Mitchell: “We’re not Republicans, or Democrats, we’re journalists.”
— During discussion about Russia invading Ukraine, as aired on NBC’s Meet the Press, February 27.

“‘Nobody that I’m aware of feels that opposing Clyburn’s nomination would be the wise thing to do,’ he [Representative Bennie G. Thompson] said. ‘If you know that a person has been vetted by Jim Clyburn, you know that person won’t go to the court and end up being a Clarence Thomas,’ referring to the Black justice whose rulings often resemble the thinking of White conservatives.”
— Reporters Cleve R. Wootson Jr. and Marianna Sotomayor in February 17 Washington Post article. The language in the online edition of the article was later changed.

Or Maybe Republicans Just Might Have an Issue With Her Ideology?

“There’s no question in my mind that she [Supreme Court nominee Judge Ketanji Brown Jackson] is qualified, and the attacks that are going to come from the right are based on race, not on qualifications.”
— Co-host Sunny Hostin on ABC’s The View, February 25.

The Constitution “Not Sacred,” is “Kind of Trash”

Co-host Ana Navarro: “I’m out of my mind about the bills banning conversations about race and ethnicity, and LGBTQ just even mentioning gender identity in primary schools. But some will say, okay, are you arguing for throwing out the Constitution? Should the Constitution be thrown out? What do we do? Is it a living document or is it a sacred document?”
The Nation justice correspondent Elie Mystal: “It’s certainly not sacred. Let’s start there. The Constitution is kind of trash. Again, let’s just talk as adults for a second.”
Co-host Joy Behar: “What did you say? It’s kind of what?”
Mystal: “It’s kind of trash. It was written by slavers and colonists and white people who were willing to make deals with slavers and colonists. They didn’t ask anybody who looked like me what they thought about the Constitution. They didn’t say, ‘Oh, Jim, come over here, what do you think about this O’ Constitution?’ ‘Well, masta, I sure don’t like how you sell my children, but I got to say, this King George, he needs to be stopped. My grandpappy used to say, ‘ain’t no taxation without representation for masta.’….The very least we can do is ignore what those slavers and colonists and misogynists thought.”
— ABC’s The View, March 4.

First the Pandemic and Now Ukraine Is Invaded, Joy’s EuroTrip Keeps Getting Ruined!

“I’m scared of what’s going to happen in Western Europe too. You know, you just plan a trip. You want to go there, want to go to Italy for four years, and I haven’t been able to make it because of the pandemic, and now this.”
— Co-host Joy Behar discussing Russia’s invasion of Ukraine as aired on ABC’s The View, February 24.