COMPROMISED: Networks Spend Only 13 Minutes (In a Year) On Uyghur Genocide

With the Beijing Olympics set to commence (NBC’s live coverage begins on February 3) there’s an opportunity for the Big Three networks (ABC, CBS, NBC) to shine a spotlight on the ongoing genocide of the Uyghurs. China has been accused of sentencing “hundreds of thousands” of the Uyghur minorities to prison terms and “forced” labor. There have also been accusations of torture and of women being sexually abused and “forcibly” sterilized.

So how have the networks covered these horrifying charges of China’s human rights violations of the Uyghurs? They’ve largely censored them.

MRC analysts looked at China policy stories on the broadcast evening and morning news programs for an entire year (January 31, 2021-January 31, 2022) and discovered the nets devoted a paltry 13 minutes, 38 seconds to the ongoing genocide.

If they had actual Chi-Com minders in their New York/Washington control rooms would their coverage of the Uyghurs look ANY different?

Remember, these are network news shows who portray Republican-backed voter ID laws as Jim Crow 2.0 but are now whistling past an ACTUAL genocide happening everyday in China. 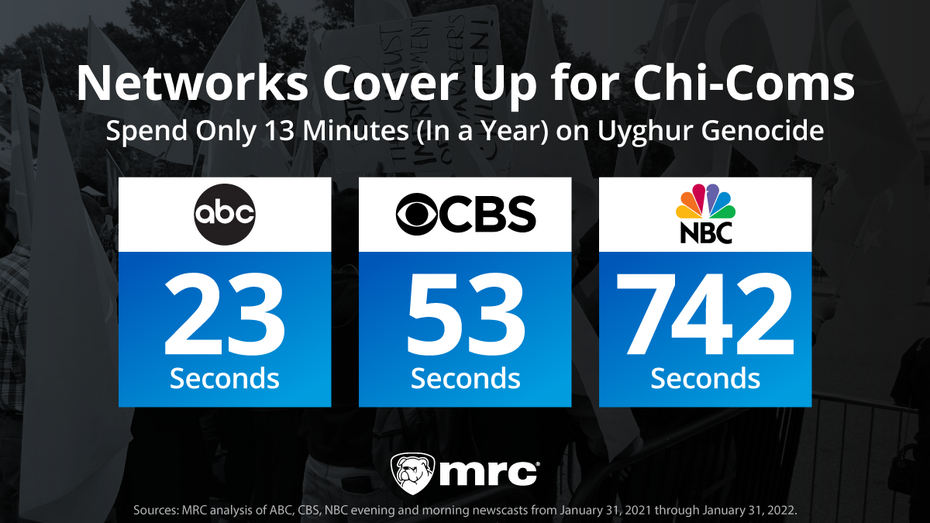 Most of the coverage came in “blink and you missed them” mentions. ABC was the most shameful, spending just 23 seconds on the humanitarian crisis. CBS wasn’t much better as they aired just 53 seconds of mentions on the Uyghurs. NBC had the most amount of coverage (742 seconds or 12 minutes, 22 seconds).

NBC was the only network to air full reports on the Uyghurs, coming in just three full segments by correspondent Keir Simmons. In contrast, back in 2004 when there was a human rights story involving the American military (Abu Ghraib prison scandal) NBC’s evening and morning shows aired 58 stories from April 29, 2004 - May 11, 2004. That’s right, in a year’s time, NBC news aired just three full reports on the Uyghurs compared to 58 stories in less than two weeks of Abu Ghraib 2004 coverage.

Are the networks compromised? Sure seems that way. Is NBC News scared to report on China abuses for fear of NBC Sports losing their Beijing Olympic broadcast rights? Is ABC News terrified that if they offend Chinese Communist Party officials their parent company Disney won’t be allowed to show the latest Marvel superhero movie in Chinese theaters? Same question goes for CBS News. Is their parent company Viacom (which also owns Paramount) worried about the Top Gun reboot being banned?

ON THE BRIGHT SIDE…SORT OF 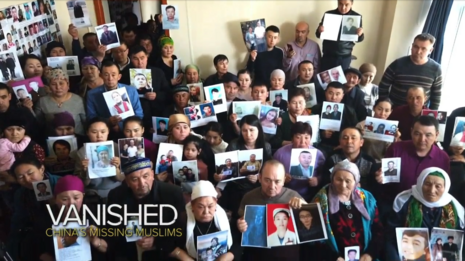 It should be noted that ABC actually devoted an entire Nightline (August 5, 2021) to the Uyghur crisis. ABC correspondent Bob Woodruff reported on “a Turkic Muslim family’s journey to safety after facing persecution in China” and on how the “US clamps down on Chinese goods possibly made by Muslims in detention camps.” So that’s the good news. The bad news? It was buried at 12:37am after an episode of ABC’s Jimmy Kimmel Live!

In the coming weeks, ABC, CBS, NBC have an opportunity to make up for lost time. Perhaps ABC could air some of Woodruff’s reporting in-between their updates of how the U.S. bobsledding team is doing? Maybe NBC will let Simmons squeeze in some more stories of Uyghur abuse, right after the figure skating updates.

But based on how awful their coverage has been in the past year, you shouldn’t hold your breath.