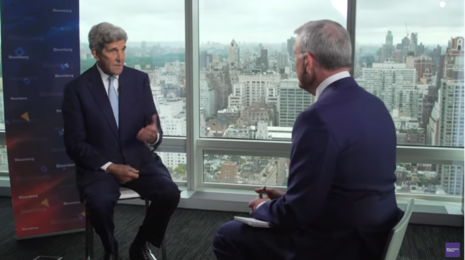 On Wednesday, former Secretary of State and current Biden administration U.S. special presidential envoy for climate John Kerry sat down with Bloomberg’s David Westin and offered a disgraceful take on China’s abuse of the Uyghur people.

Asking about the “Uyghur situation” Westin pressed the former Massachusetts Senator and failed 2004 presidential candidate: “What is the process by which one trades off climate against human rights?” Kerry coldly responded: “You know life is always full of tough choices.”

So how much time did the ABC, CBS, NBC Wednesday evening and Thursday morning shows devote to Kerry’s insulting brush-off to the Ugyhurs? 0 seconds.

Also skipped by the nets? His wife’s potentially compromising China investments. Did Kerry dodge the Uyghur question because of Teresa Heinz’s investments in China? On the day (September 21) before making his insulting remark The Daily Caller reported the following:

Kerry’s latest filing with the Office of Government Ethics (OGE) in March shows his wife, Teresa Heinz, has an investment of “over $1 million” through her family trusts in Teng Yue Partners, a New York hedge fund that focuses on equity investments in China. Heinz is the heiress to the food processing company H.J. Heinz, and has an estimated net worth of over $750 million.

The following is the relevant exchange from Kerry’s September 22 interview with Bloomberg’s David Westin:

HOST DAVID WESTIN: Another issue related to China is importing of solar panels because clearly a priority of the Biden administration is addressing climate but it’s not the only priority. There are other things as well, such as the Uyghur situation in the West. What is the process by which one trades off climate against human rights?

JOHN KERRY: Well life — you know — life is always full of tough choices in the relationships between nations.