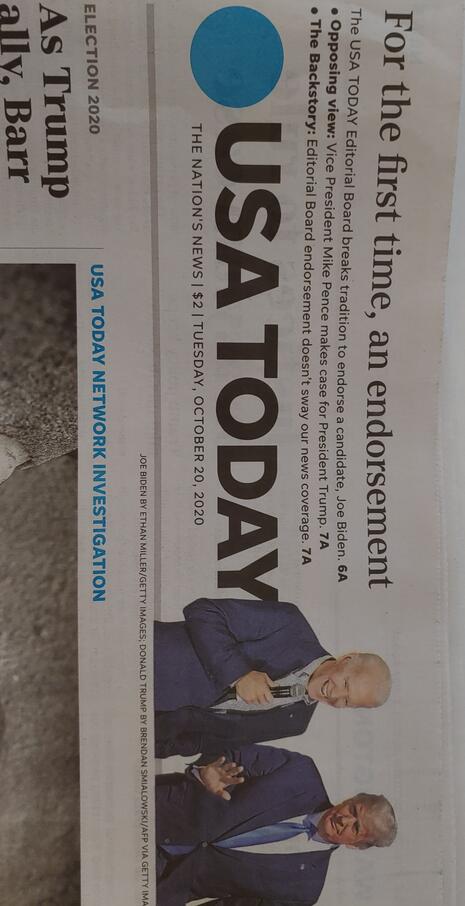 USA Today on Tuesday endorsed Joe Biden for President. The paper was so excited about choosing the Democrat that the editors highlighted the announcement on the front page, above the logo: “For the First time, an endorsement. The USA Today Editorial Board breaks with tradition to endorse a candidate, Joe Biden.”

Given that USA Today has never, technically, endorsed a presidential candidate before, the paper touted this as historic and important. But, as the opening paragraph of the 1775 word pronouncement noted, just four years ago the paper demanded that Americans not vote for Trump. That, of course, is very close to endorsing Hillary Clinton.

Four years ago, the Editorial Board — an ideologically and demographically diverse group of journalists that is separate from the news staff and operates by consensus — broke with tradition and took sides in the presidential race for the first time since USA TODAY was founded in 1982. We urged readers not to vote for Donald Trump, calling the Republican nominee unfit for office because he lacked the “temperament, knowledge, steadiness and honesty that America needs from its presidents.” We stopped short, however, of an outright endorsement of Hillary Clinton, the Democratic nominee. This year, the Editorial Board unanimously supports the election of Joe Biden, who offers a shaken nation a harbor of calm and competence.

Why does this all matter? USA Today is still the top newspaper in the country, according to circulation totals. 2,278,022. The journalistic outlet portrayed the 2020 election as a "break-glass" moment. Here's the dramatic image from the editorial page:

But, of course, don’t think that USA Today is liberal. In a separate article explaining the decision, editor-in-chief Nicole Carroll touted just how “non-partisan” the editorial board is:

The nonpartisan USA TODAY Editorial Board is known for being balanced in its views. That doesn’t mean the editors avoid sharp opinions, it means they offer a variety of viewpoints, including today’s Opposing View by Vice President Mike Pence. Nonpartisan means the board has no formal or informal connections to either the Republican or Democratic parties.

Carroll went on to promote USA Today as ideologically diverse: “The 10-member Editorial Board includes conservatives, liberals and centrists.” Yet the decision was “unanimous.”

So not one member, even among the "centrist" or "conservative" wing of the USA Today editorial board supported Trump? Yes, this all sounds very “non-partisan.” This is the same USA Today that has begun producing “fact checks” for the paper, including one in July that declared it “false” to say the Democrats started the Civil War and founded the KKK. (They absolutely did both. Here's my fact check of the fact check.)

In fairness, credit to USA Today on Tuesday for at least allowing Mike Pence to write an op-ed responding to the editorial.

The paper closed the editorial by insisting the endorsement was a one-time deal: “We may never endorse a presidential nominee again. In fact, we hope we'll never have to.” However, once you start endorsing Democrats, it can be hard to stop.