Angry About Trump’s Acquittal, Redoing the Russia Hoax and Pushing Dems to the Left 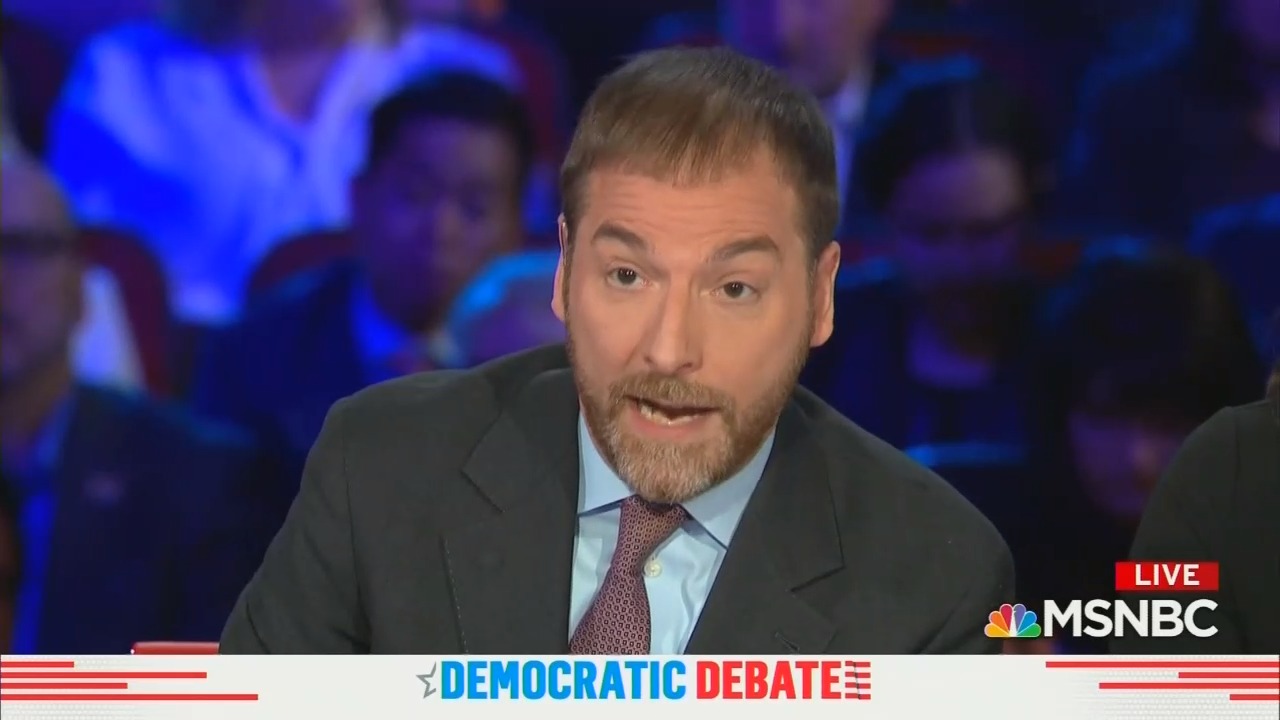 Over the past month liberal journalists were infuriated by “dark” Donald Trump’s “bizarre” State of the Union performance and his “vindictive,” “viperous” victory speech after his impeachment acquittal.

There was also outrage over “racist” Rush Limbaugh receiving the Medal of Freedom and ABC’s The View co-host Joy Behar compared Trump to O.J. Simpson as she confessed the President is making her “nuttier” by the day.

The following are some of the most obnoxious outbursts by liberal reporters and hosts over the last month:

Hitting Lefty Candidates From the Left

“In 2000....You specifically praised [Sen. Bernie Sanders] for embracing socialism. You have now since said you’re concerned about his policies....Millennials by a big chunk embracing his version of democratic socialism. You do not. Are you out of touch with your generation?”
— Todd to South Bend, Indiana Mayor Pete Buttigieg at the NBC/MSNBC/Telemundo Democratic debate in Las Vegas, February 19.

“Mayor Bloomberg, should you exist?....Is it too much? Have you earned too much? Has it been an obscene? Should you have earned that much money?”
— NBC’s Meet the Press host Chuck Todd to former New York Mayor Mike Bloomberg at the NBC/MSNBC/Telemundo Democratic debate in Las Vegas, February 19.

“You have said you want to hold oil and gas executives accountable for their role in harming our planet. You have even suggested that you might put them in jail....What would you do with these companies that are responsible for the destruction of our planet?”
— Telemundo correspondent Vanessa Hauc to former Vice President Joe Biden at the NBC/MSNBC/Telemundo Democratic debate in Las Vegas, February 19.

“God bless Pete Buttigieg, but he kind of talks at the level of Mr. Rogers and with that composure and poise and he just did it up here on the stage in New Hampshire....He speaks in perfect sentences. It’s impressive. He’s an amazing human being....He is that guy that everybody wanted their kids to be friends with at school.”
— Correspondent Vaughn Hillyard on MSNBC’s live coverage of the New Hampshire Democratic primary, February 12.

“It’s all happening again....Russia has endorsed the re-election of President Donald Trump who is trying desperately to keep that matter secret....This news paints a devastating portrait of a President who appears now willing to suppress intelligence of Russia’s intentions for his own political purposes keeping Congress in the dark about new Russian attacks on our democracy.”
— Host Chris Matthews on MSNBC’s Hardball, February 20.

Trump Would Totally Throw Us In Jail If He Could

“Senator, when we look at pictures from North Korea, just an example of a dictatorship, and you watch everybody wearing those high peaked hats and everybody smiling in unison or frowning in unison or marching in unison in goose step, and you watch the people in their so-called assembly....They are all so frozen in fear of being seen as somehow out of line...Are Republicans beginning to act like that? Fearful of not showing the right emotion, even in public? You have to be exuberant in this cult when he stands before them, it seems.”
— Host Chris Matthews to Democratic Senator Sherrod Brown on MSNBC’s Hardball, February 6.

CNN chief political analyst Gloria Borger: “It was vindictive....It was mean-spirited, it was poisonous, it was spiteful.”...
Host Brienna Keilar: “I was struck by just what a dark place this was in this speech....This was so dark.”...
Correspondent John Harwood: “This was a very disturbing tableau for the country. It was dark because he’s made clear that his mind is dark. This is someone who is in deep psychological distress right now, self-pitying, insecure, angry.”
— Discussion on Donald Trump’s post-impeachment speech as aired on CNN Right Now with Brianna Keilar, February 6.

“I’m going to express how appalled I was by it....Voters should be forced to listen to an entire Trump press conference because then I think it’s impossible to vote for him. But they’ve [Republican senators] got to be sitting there and thinking: ‘What a poor excuse for a president, what a poor excuse for a man, what a poor excuse for a human being. And I voted to acquit him.’”
— Former Time editor, former Barack Obama administration official and current MSNBC analyst Richard Stengel on MSNBC’s Deadline: White House, February 6.

“President Trump spoke today with the venom of a black mamba. ‘Witch hunt, evil, corrupt dirtty cops, leakers, liars, disgrace.’  These were the viperous words he spewed in the East Room on a day he begun at a prayer breakfast....They sounded like the language of a dictator unleashing a violent purge that his targets would be unlikely to survive.”
— Host Chris Matthews on MSNBC’s Hardball, February 6.

“The dark parts were dark. The bizarre parts were bizarre, down to the awarding of the Medal of Freedom to Rush Limbaugh by the First Lady during the speech which at so many points differed from the truth.”
— Anchor Brian Williams on MSNBC’s post-State of the Union coverage, February 4.

“[Trump] is a master marketer, and he understands, as Mark Twain said, that a lie gets halfway around the world before the truth can get its boots on....and part of it is [Nazi propagandist Joseph] Goebbels, the big lie.....What I think is scary for a lot of Democrats is he’s going to run a big lie campaign all the way to the election.”
— Former Newsweek editor Jonathan Alter on MSNBC’s post-State of the Union coverage, February 5.

Honoring the “Face of Racism”

“Rush Limbaugh is a bigot. Rush Limbaugh is racist. Rush Limbaugh was a birther....This President goes from Charlottesville to s-hole nations to giving the Medal of Freedom for the whole world to see to Rush Limbaugh – that is a big contradiction. That’s hypocrisy.”
— CNN political commentator and Urban Radio Network White House correspondent April Ryan on CNN’s Cuomo Prime Time, February 7.

“Limbaugh has lived the American Dream, but, at the same time, he’s used his words to make a mockery of that dream, sometimes sharing xenophobic, misogynistic, and racist sentiments with the masses.”
— Correspondent Sara Sidner on CNN New Day, February 6.

“Rush Limbaugh recently said he has lung cancer. There are a lot of people in the Republican party who love Rush Limbaugh. But for Democrats and a lot of people, independents and African-Americans, he’s just seen as someone who is the face of racism, frankly.”
— PBS NewsHour correspondent Yamiche Alcindor on MSNBC’s State of the Union coverage, February 5.

“I am nauseous when I see Democrats fight amongst themselves....Can I tell you what Republicans would do? A Republican would take Mike’s [Bloomberg] money and say, ‘Help me kill Trump.’”
— Host Nicolle Wallace on MSNBC’s Deadline: White House, February 3.

Trump Is So Bad, Sam Is Endorsing a Candidate for the First Time...

“When I was a working reporter in Washington for 52 years, I never did anything like this [endorsing Mike Bloomberg for president]. I never gave any money to candidates. I didn’t even register for a political party....I think it’s very important now. We are in the grip....of a sick, ignorant man. He’s mean, he’s corrupt. And if we don’t get this right, we may lose the things that have made this country the best place to live in the world.”
— Former ABC News White House correspondent Sam Donaldson on CNN’s Anderson Cooper 360, February 14.

...Except When He Did It Before

“I’m nominating you for President of the United States and I’m going to quit my job and go to work for you.”
— Former ABC News White Correspondent Sam Donaldson to Mario Cuomo, July 13, 1992 New York Daily News.

Obama Made Voting “An Act of Love”

“Barack Obama was such a transformative figure for people. And he was for many people our age [Millenials] the first president that they really got behind. And he made voting into an act of love.”
— Time magazine journalist and author Charlotte Alter on MSNBC Live, February 18.

You Know Who Else Was Acquitted? OJ

“She’s [Nancy Pelosi] playing hardball like he does. When they go low, we go lower...That’s the only thing that works with these criminals and fascists who are running the country right now!”
— Co-host Joy Behar praising Nancy Pelosi’s ripping up Donald Trump’s State of the Union speech, as aired on ABC’s The View, February 5.