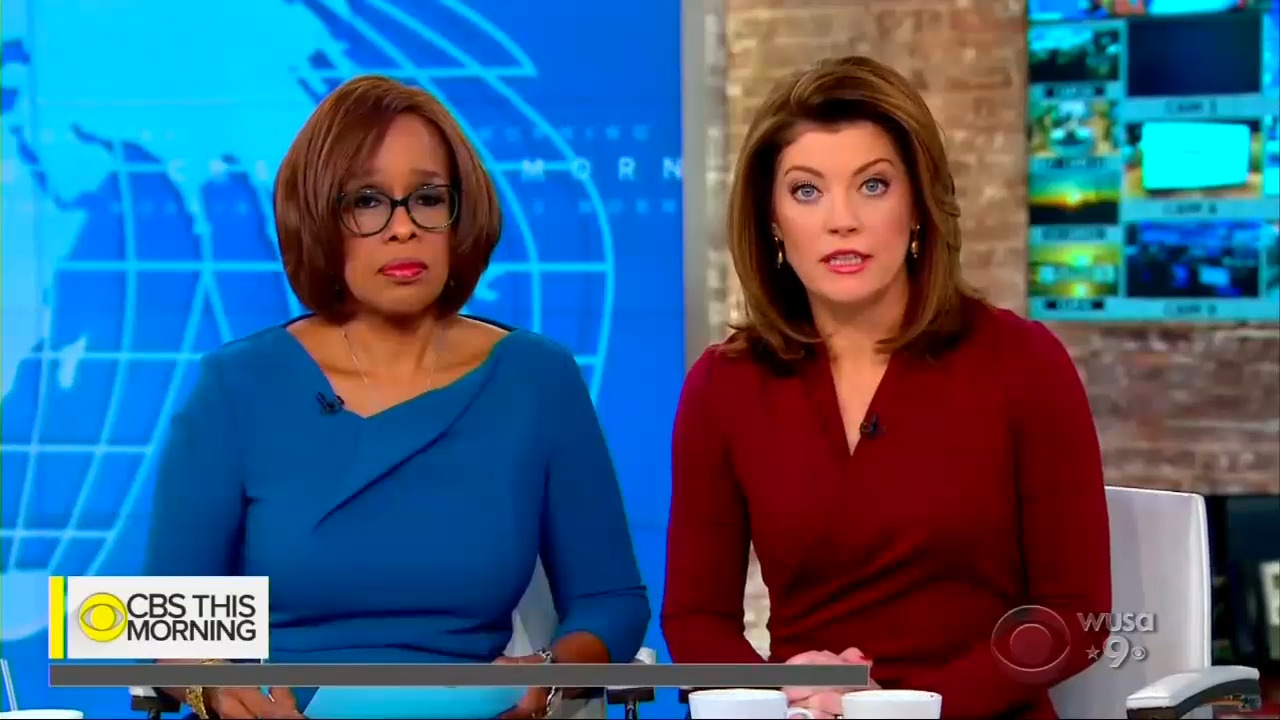 Meet tonight’s Democratic debate moderators: One is a Democratic donor and the other one might as well be.

CBS This Morning co-host Gayle King has a long history of supporting Democrats. According to Open Secrets, she’s donated to Barack Obama, the DNC, and Harold Ford Jr and is “good friends” with New Jersey Democratic Senator Cory Booker. Even while at CBS, she donated to Obama and attended his birthday party. Most recently, she vacationed with the Obamas.

CBS Evening News anchor Norah O’Donnell has a long career of donating to liberals in the form of softball questions and praise of Democratic lawmakers while attacking Republicans and conservatives. She referred to current presidential candidate and former Vice President Joe Biden as “Uncle” Joe but once openly questioned if current President Donald Trump was “dangerous to democracy” and should be “removed from office.”

The following is a look at how King and O’Donnell have covered Democrats and Republicans during the Donald Trump era:

Co-host Norah O’Donnell: “You serve in the U.S. Senate. Democrats are in control....What’s going to happen if Republicans take control?”
Senator Elizabeth Warren (D-MA): “Oh, it’s going to be ugly out there if the Republicans take control.”
O’Donnell: “I guess that was a softball of a question, wasn’t it?”
Warren: “How many ways can we talk about this?”
Co-host Charlie Rose: “She just teed it up for you. Go.”...
Co-host Gayle King: “What do we need to focus on now, the Democrats? To make sure that the – that they maintain control of the Senate?”
— CBS This Morning, October 28, 2014.

“You have been known as a champion for the middle class. Why have you made that your calling?”
— Co-host Norah O’Donnell to Senator Elizabeth Warren on CBS This Morning, April 22, 2014.

Should “Dangerous” Trump Be Removed from Office?

“If he is dangerous to democracy, as you say, should he be removed from office?”
— Co-host Norah O’Donnell question to Sen. Jeff Flake on CBS This Morning, October 25, 2017.

Norah’s Plea: Can Anything Be Done to “Stop” Kavanaugh?

Not a Single Man Worthy of Supreme Court Seat?

Conservative commentator Pat Buchanan: “You got down to four women, not a single white male - all women. And then we’re going to pick an Hispanic – ”
Anchor Norah O’Donnell, interrupting: “Did it ever occur to you, Pat, that maybe there weren’t any white men who were qualified?”
— MSNBC live coverage of Obama’s Supreme Court nomination of Sonia Sotomayor, May 27, 2009.

“He [Limbaugh] has said, ‘I hope he fails,’ talking about President Obama. And Rush Limbaugh also said this, he said ‘we are being told that we have to hope Obama succeeds, that we have to bend over, grab the ankles, bend over forward, backward, whichever, because his father was black, because this was the first black President.’ Do you agree with Rush Limbaugh?...On that specific thing, that, ‘we have to bend over because this is the first black President,’ why don’t you feel like you could denounce something like that? Are you so beholden to someone like Rush Limbaugh that you can't say that?...Is that the type of rhetoric we need?”
— MSNBC’s Norah O’Donnell to Congressman Mike Pence (R-IN), on MSNBC Live, January 28, 2009.

Getting Chummy With Her Friends

Co-host John Dickerson: “Senator Booker joins us first on CBS This Morning to reveal the details of his plan. Good morning, senator. We should also mention that Gayle is good friends with the senator and has supported him in the past.”
Co-host Gayle King: “Why should we mention that? I left my Cory Booker t-shirt at home....If you become president will Rosario Dawson become First Lady?”
— CBS This Morning, May 6, 2019.

“Your performance last night is certainly what people are talking about this morning. I’m hearing words like, ‘A star is born,’ ‘She is fervent – she is fervent but deploys her anger precisely like a flashlight.’ Voters in Iowa and New Hampshire are telling CBS News today that you had a strong performance. How do you intend to capitalize on that momentum? Clearly the t-shirts is one way, I understand that those are already on sale.”
— Co-host Gayle King to Democratic presidential candidate Kamala Harris on CBS This Morning, June 28, 2019.

Why Are Those Republicans Being So Stubborn About Impeaching Trump?

“Do you think, Senator, that you should have spoken up more? Do you regret you didn’t speak up more? And why is it so difficult for Republicans to speak up against this President when they don’t believe what he’s doing. Tell us why that’s so hard?”
— Co-host Gayle King’s question to former Republican Senator Jeff Flake on CBS This Morning, January 20, 2020.

Trump Is Making The Statue of Liberty Cry

“We went straight to the facility, the location where kids and their parents were reunited. All I can say after talking to the people, watching the people, listening to the people, the Statue of Liberty, I think, is weeping right now.”
— Co-host Gayle King discussing border detention centers for children on CBS This Morning, June 18, 2018.

Co-anchor Scott Pelley: “Night two of the convention, the floor is covered with shards of glass. Hillary Clinton has shattered another ceiling for women.”...
Co-anchor Gayle King: “Happy tears in the room for Hillary Clinton and I mean a lot of tears. One man, a delegate from South Carolina, told me that he went into the ugly cry which means sobbing uncontrollably.”
— During CBS’s live Democratic convention coverage, July 26, 2016.