Don’t be surprised, but CBS This Morning on Thursday covered the launch of Joe Biden without ever mentioning any of his gaffes, including his habit of being grabby with women. Instead, co-host Norah O’Donnell touted “Uncle Joe” talking about America’s “core values.” The CBS journalist also repeated the talking points from the Democrat’s announcement video.

O’Donnell referenced the names of people endorsing Biden’s bid early and lovingly called Biden by some of his nicknames: “But apart from these [endorsements], this is Uncle Joe. You know? Regular Joe from Scranton, Pennsylvania and the rust belt states and the white working class voters that Democrats lost in the last election.”

Just Uncle Joe, huh, Norah? Can’t expect objectivity from here. The co-hosts seemed enamored by Biden starting his campaign with mentions of the violence in Charlottesville. O’Donnell parroted, “He using that phrase again, that this is the battle for the soul of this nation.” 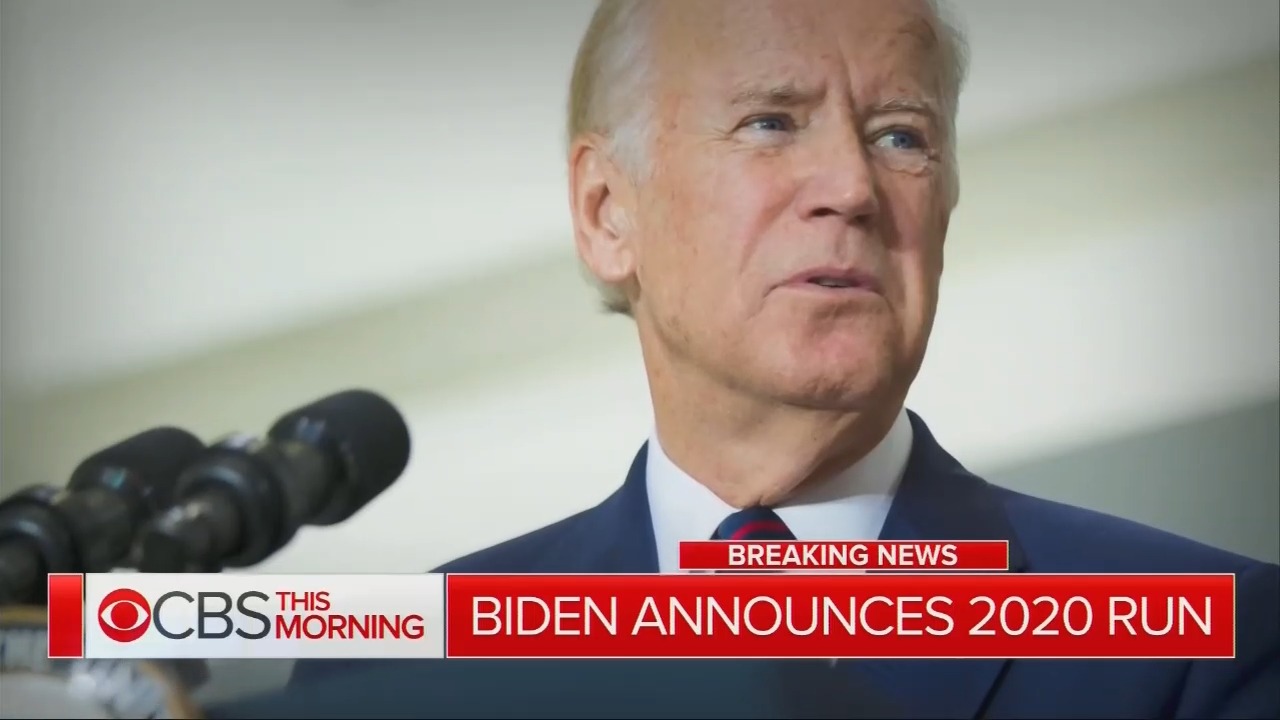 Correspondent Ed O’Keefe explained the meaning of Biden’s announcement: “In that video this morning, Biden talks about how he believes Americans are in a battle of the soul for the nation. And in the coming days, we expect to hear Biden talk about restoring an inclusive middle class.”

As if her viewers still didn’t get the talking points, O’Donnell underlined, “He’s really talking about the core values of this nation are at stake.” Co-host John Dickerson reiterated that “[h]e talks about America shouldn’t be a place where you give hate safe harbor, which is an attack on the President.”

So, anyone unclear on what Biden is talking about? The journalists at CBS want to make sure you understand. What they aren’t concerned about is the controversy that erupted when multiple women accused the Democrat of unwanted touching.

Over on ABC’s Good Morning America, the co-hosts touted Biden’s “progressive patriotism” and “bold appeal to American values.” On NBC’s Today, Andrea Mitchell briefly admitted that the Democrat’s first campaign fundraiser will be hosted “at the home of David Cohen, Senior Vice President of Comcast, parent company of NBCUniversal.”

A transcript is below. Click “expand to read more:

JOHN DICKERSON: We have big political news this morning. Former Vice President Joe Biden is now a 2020 presidential candidate. He released a three-minute campaign video calling out the 2017 white nationalist rally in Charlottesville, Virginia, and President Trump's response that there were, quote, “there were very fine people on both sides.”

NORAH O’DONNELL: And a senior campaign official says that, for Biden, what happened in Charlottesville, quote, “shook him to the core” and it is the moment he decided he had to run.

JOE BIDEN: I believe history will look back on four years of this president and all he embraces as an abhorrent moment in time. But if we give Donald Trump eight years in the White House, he will forever and fundamentally alter the character of this nation, who we are, and I cannot stand by and watch that happen.

O’DONNELL: Biden is now the 21st candidate for the Democratic nomination, and polls show that right now he's one of the favorites to win it. Ed O'Keefe is covering the 2020 campaign. Good to see you.

O’DONNELL: He using that phrase again, that this is the battle for the soul of this nation. What does that tell us about how he’s going to wage this campaign?

O’KEEFE: It tells us that he's ready  to throw some punches and is far more willing to do it than other Democrats in the race so far. So, we’ll see. Now, in that video this morning, Biden talks about how he believes Americans are in a battle of the soul for the nation. And in the coming days, we expect to hear Biden talk about restoring an inclusive middle class. We’ve talked several times this year about the diversity of the Democratic field. More women, minorities. There is an openly gay candidate. Now, consider the age gap. At 76, Biden is the second oldest candidate in the field of Democratic contenders, behind the 77-year-old Bernie Sanders.

When Biden ran for president in 1988, this cycle’s youngest candidate, 37-year-old Pete Buttigieg of South Bend, Indiana was just in kindergarten. It’s unclear if Biden’s more than 40 years of public service will translate to voter support. Also unclear, what kind of financial support Biden will earn? His first test is how much money Biden raises today. The number to beat is $6.1 million raised by Beto O'Rourke on his first day on the campaign trail earlier this year. You might also be wondering about Joe Biden’s former boss, President Obama and where he stands on all this. In a statement this morning, he said picking Biden as his running mate in 2008 was, quote, “one of the best decisions he ever made.” But we’re told he is unlikely to throw his support behind a specific candidate this early in the campaign.

O’DONNELL: But it’s interesting too. I mean, he’s really talking about the core values of this nation are at stake. I mean, he comes with a wealth of background and to take him on are what, essentially are issues like character.

JOHN DICKERSON: Sure. Exactly. He starts --- He founds his announcement in Charlottesville, Virginia in August of 2017. He talks about America shouldn’t be a place where you give hate safe harbor,” which is an attack on the President.

O’KEEFE: All these other candidates are focused on themselves, who they are, what they would do. It is telling that someone who has universal name recognition is willing to spend a little capital on the start focusing on his opponent.

O’DONNELL: He doesn’t need to introduce himself to voters. They already know his bio.

ANTHONY MASON: Should we be surprised Obama is holding back at this point?

O’KEEFE: No. Because, I mean, I think if the shoe were on the other foot, eight years ago or however many years ago — I can’t do math this early in the morning. He wouldn’t have wanted an incumbent stepping on the race and would have understood that somebody who came from behind to win it improbably in the view of many people, it should be a wide open race.

MASON: All right, Ed. Thanks.

NORAH O’DONNELL: But apart from these names [of people endorsing him], this is Uncle Joe. You know? Regular Joe from Scranton, Pennsylvania and the rust belt states and the white working class voters that Democrats lost in the last election.