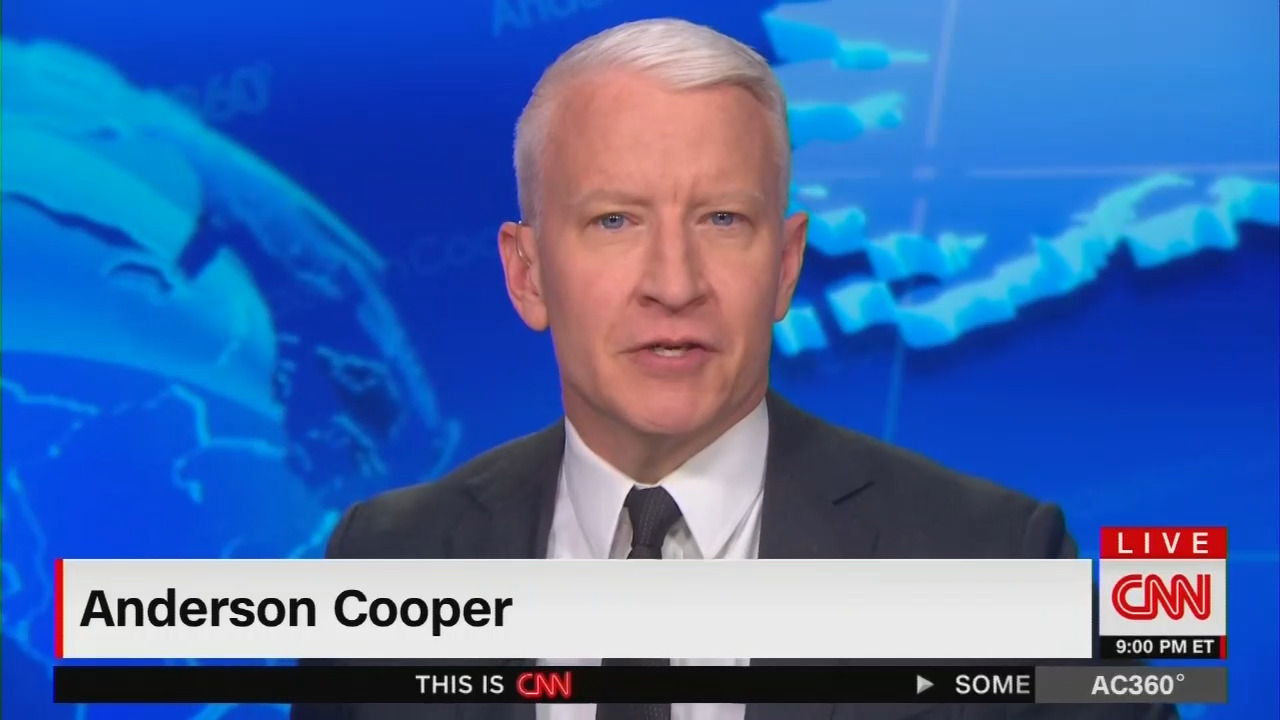 CNN anchor Anderson Cooper, along with his colleague Erin Burnett and the New York Times’s Marc Lacey, will moderate Tuesday night’s Democratic debate. While Cooper has in the past shown the capacity to ask tough debate questions, a look through the MRC archives suggests it’s more likely that if the AC360 host does ask any challenging questions, they’ll be from the left.

From trashing the “treasonous” Trump to hailing Hillary Clinton as the “Queen of Compromise” the following is a collection of Cooper’s liberalism at CNN:

“Where can you go after lying repeatedly, daily, hourly?....Sarah [Huckabee] Sanders announced today she’s boarding judge Jeanine Pirro’s trolley to hell. Toot toot. And joining, try to contain your shock, Fox News as a contributor....She’s a double threat. She goes from stonewalling all the way to lying.”
— Host Anderson Cooper on CNN’s Anderson Cooper 360, August 22, 2019.

“You have been watching perhaps one of the most disgraceful performances by an American president at a summit in front of a Russian leader certainly that I’ve ever seen.”
— Anderson Cooper 360 host Anderson Cooper on CNN’s post-Helsinki summit coverage, July 16, 2018.

“If he [Donald Trump] took a dump on his desk, you would defend it.”
— Host Anderson Cooper to political analyst Jeffrey Lord during a discussion about President’s discussions with Russians, as aired on CNN’s AC360, May 19, 2017. Cooper later apologized.

Hillary is the “Queen of Compromise”

“Most Americans of course, stand stubbornly in the middle, as has Clinton, at least for the four years she’s been in the Senate. She’s lost the vast right-wing conspiracy rap, changing into a queen of compromise, eager to reach across the aisle – a successful strategy so far.”
— CNN’s Anderson Cooper on Anderson Cooper 360, June 7, 2005.

CNN analyst David Gergen: “Republicans are pretty much in disarray....They have not yet come up with a compelling alternative, one that has gained popular recognition. So-”
Anchor Anderson Cooper: “Teabagging. They’ve got teabagging.”
Gergen: “Well, they’ve got the teabagging....[But] Republicans have got a way - they still haven’t found their voice, Anderson. They’re still – this happens to a minority party after it’s lost a couple of bad elections, but they’re searching for their voice.”
Cooper: “It’s hard to talk when you’re teabagging.”
— CNN’s Anderson Cooper 360, April 14, 2009.

“Like other Planned Parenthood clinics, this one in Colorado Springs provides a range of health care services to women, including abortions, and, as we said, the suspect mentioned baby parts to investigators, as well as anti-abortion, anti-government views. The attack comes as abortion has once again become a white-hot issue on the campaign trail fueled in part by controversial videos made by an anti-abortion group about Planned Parenthood....To that point, you said earlier today, you said, ‘Hateful rhetoric and words and harassment of doctors and harassment of women going to health centers have real implications.’ And you’ve said, quote, that you’ve ‘never seen the kind of rhetoric that we’ve seen from presidential candidates.’ Do you directly link the rhetoric that you’re hearing from presidential candidates to what happened?...You believe some of the language that has been used is not only inappropriate, but you believe it can and maybe has led to violence?”
— Anchor Anderson Cooper’s questions to Planned Parenthood president Cecile Richards on CNN’s Anderson Cooper 360, November 30, 2016.

“Do you worry about using language accusing gay people of trying to do harm to the people of Florida when doesn't that send a message to some people who might have bad ideas in mind?...You for years were fighting that very idea, isn’t there a sick irony in that?....I’m just wondering though, is it hypocritical to portray yourself as a champion of the gay community when –  I’m just reflecting what gay people told me they don't see you as this....It's just that –  I will say I have never really seen you talk about gays and lesbians and transgender people in a positive way until now. I read your Twitter history for the last year and I saw you tweeting about, you know, national dog month and national shelter dog appreciation day or adopt a shelter dog month. It is gay pride month. You never even tweeted about gay pride month.”
— CNN anchor Anderson Cooper’s questions to Florida Attorney General Pam Bondi on the Orlando club shooting, June 14, 2016.

“At issue now, a video of a sermon given by Barack Obama’s minister at the Trinity United Church of Christ in Chicago....We’re running it because – like it or not, legitimate or not – it has become an issue....All this seems to have nothing to do with actual issues that the country is facing, which these candidates should be talking about and we probably should be talking about.”
— CNN’s Anderson Cooper introducing a story about inflammatory comments made by Rev. Jeremiah Wright, Anderson Cooper 360, March 13, 2008.

“We begin with tough talk on the campaign trail today – tough talk, an apology, a disavowal, and now, questions whether what you’re about to hear is a taste of sleazy campaigning and Swift Boating to come....Clearly, for a two-bit radio host, this is the biggest thing to happen to him in quite a long time.”
— CNN’s Anderson Cooper discussing conservative talk show host Bill Cunningham uttering Barack Obama’s middle name Hussein, on Anderson Cooper 360, February 26, 2008.