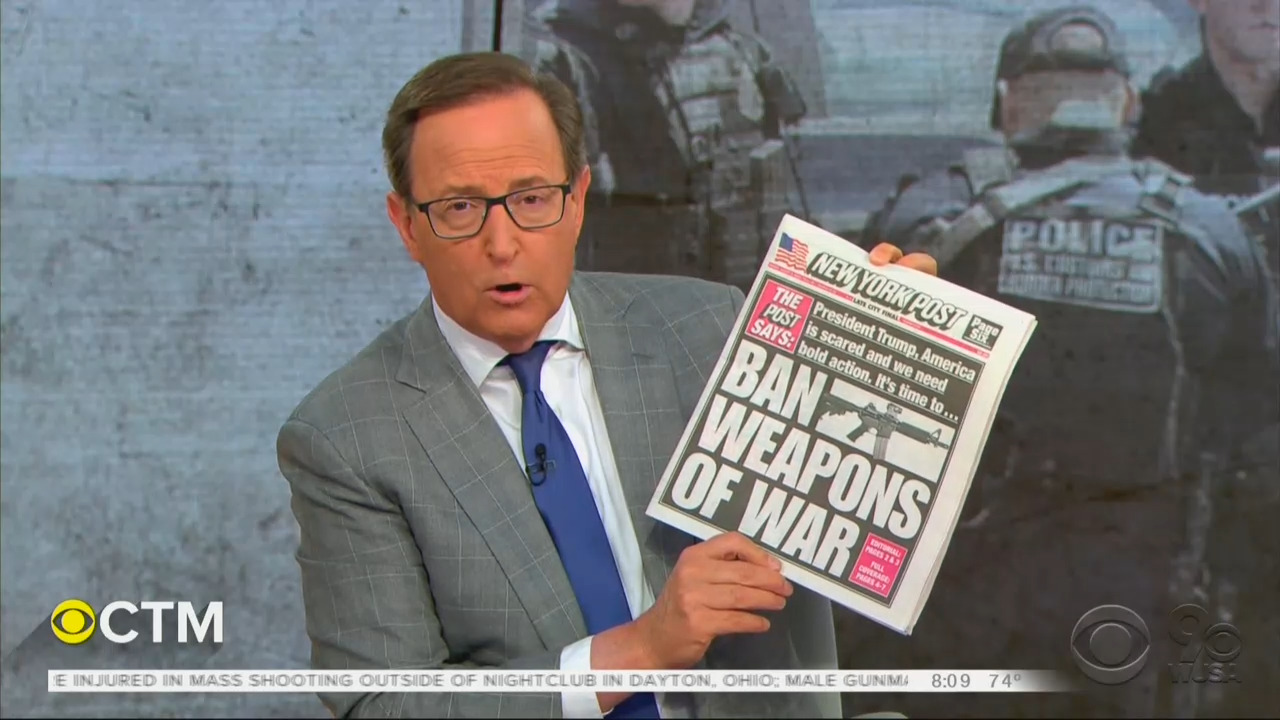 In the wake of the El Paso and Dayton shootings, the Big Three (ABC, CBS, NBC) networks have exploited those tragedies to advance their anti-gun rights agenda.

In just five days (August 4 through August 8) of coverage, the networks filled their morning show programs with statements favoring gun control over gun rights by a ratio of roughly 17 to 1.

That was three times more slanted than the 5 to 1 ratio the MRC found in network coverage of the 2017 Las Vegas shooting.

MRC analysts reviewed all statements that took a position on overall gun policy by anchors, reporters, guests and soundbites, beginning with the morning of August 4 through the morning of August 8, and found time spent arguing in favor of more gun control (35 minutes, 30 seconds) overwhelmed time devoted to supporting gun rights (2 minutes and 28 seconds.)

On the network morning shows, Republicans and gun owners were set-up as the villains who stood in the way of Democrats who were trying to stop mass shootings with their calls for increased gun regulation.

On the morning after the Dayton shooting, ABC Good Morning America co-anchor Dan Harris gravely intoned: “Right now we’re in the middle of an all too familiar macabre dance that we do as a country after these mass shootings where Democratic politicians come out and call for new legislation on guns and then essentially nothing happens.”

On the August 5 edition of Good Morning America, co-anchor George Stephanopoulos essentially cursed this country’s gun owners for their firearm purchases: “The whole country this morning shaken again by the insanity of mass shootings, forced to confront a uniquely American problem. We have more deaths by guns than any other country in the world because we have more deadly guns. That conclusion is inescapable.”

Later on Stephanopoulos’s colleague Mary Bruce attacked Republican leaders for dragging their feet on gun control: “Democrats are trying to up the pressure. They are demanding that Mitch McConnell bring lawmakers back here to Washington to try and do something to address rising gun violence, but as we have seen time and time again, it does not seem that there is the political will or interest from Republican leaders to be addressing stricter gun measures at this time.”

Over on the August 5 CBS This Morning, co-host Anthony Mason held up a copy of the New York Post to shame “conservative” gun owners: “This is the headline in the conservative newspaper, the New York Post this morning, a paper that’s generally very friendly to President Trump. It says ‘President Trump, America is scared and we need bold action. It’s time to ban weapons of war.’”

On the August 6 Today show, co-host Sheinelle Jones demonstrated her own gun expertise by talking about an “AR-whatever.” She also cited noted gun policy expert country music singer Kacey Musgraves: “Kacey Musgraves, she gave an impassioned plea to lawmakers, she says to do something about the gun violence in America....Let’s look at her Twitter comments, she says, ‘Let me be clear – I’m from Texas. I grew up around hunting and guns. There’s a time and place for that and even self-protection in ways, but this is different. The system is majorly flawed, and nobody needs anything remotely automatic. Period.’ She says, ‘they’re mass killing machines.’ A lot of people have said that. Look we’re in hunting areas. You know if you want to shoot a deer, that’s fine. But you don’t need an AR-whatever.”

A tiny portion of the discussion was dedicated to arguments in favor of gun rights. One of those moments was CBS This Morning correspondent David Begnaud, on August 5, talking to Army Specialist Alden Hall, who was one of the witnesses at the El Paso Walmart shooting:

David Begnaud: “Alden Hall says he regrets not having his gun on him that day because he felt like he could have done something to intervene and he’s thinking about next time.”
Army Specialist Alden Hall: “I didn’t think that I would need an assault rifle or a bigger handgun, but after seeing that yesterday, all things are possible.”
Begnaud: “Are you planning to buy a bigger weapon?”
Hall: “This is an open carry state, so most definitely.”

That was 83 seconds of the total 2 minutes and 28 seconds of pro-gun arguments (all aired on CBS This Morning).