ABC: Trump Speech ‘Lacked Self Reflection’ Over How His ‘Rhetoric Contributed’ to Shootings 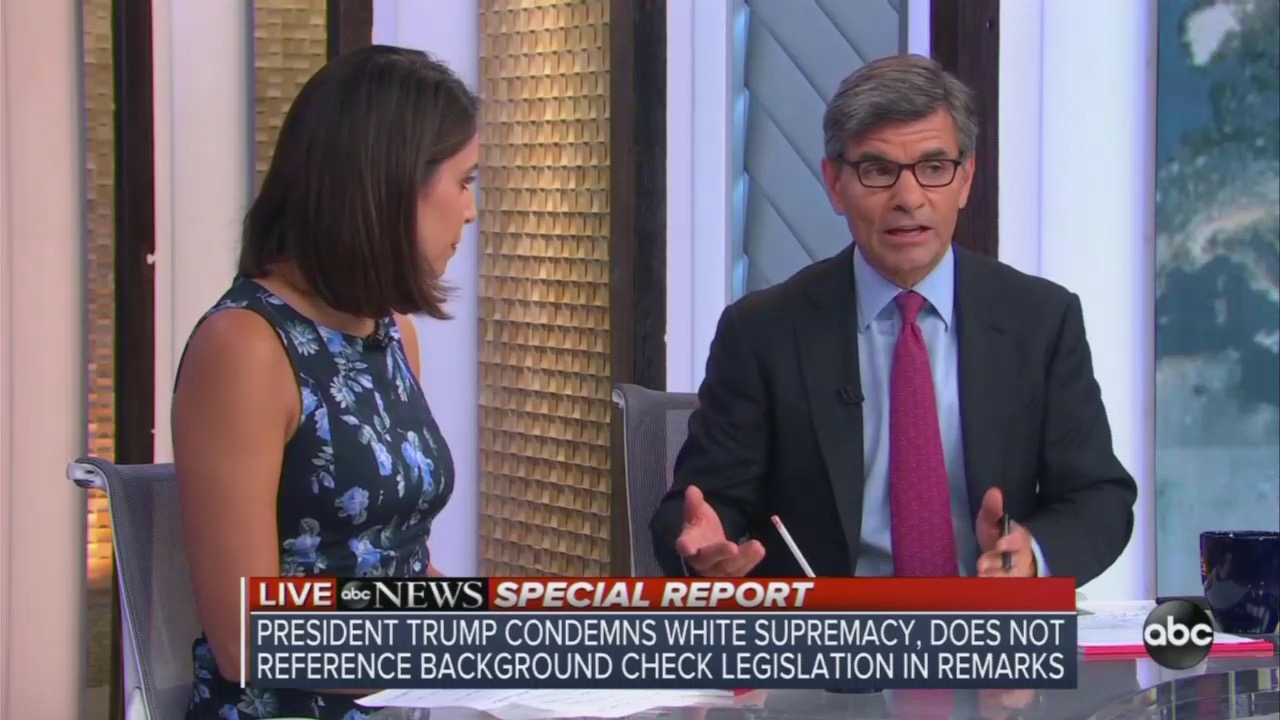 Immediately following President Trump’s address on what his administration will do in response to the mass shootings over the weekend, ABC’s journalists were ready to pounce. Good Morning America co-anchors George Stephanopoulos and Cecilia Vega slammed Trump’s words as “empty” and “lacking self-reflection” on how his “rhetoric contributed” to these shootings. Stephanopoulos also complained to correspondent Mary Bruce about how Trump and Republicans weren’t doing anything to address gun control.

Before that, World News Tonight anchor David Muir panned the President’s address as lacking: “[W]e didn't hear anything about the temperature of the rhetoric right now here now in America and whether that’s playing any sort of role,” he critiqued.

Anchor George Stephanopoulos turned to Senior White House Correspondent Cecilia Vega for more on that. The pair attacked Trump for “downplaying” white nationalism, in the past, while echoing Democrats, smearing Trump’s “rhetoric” as “contributing” to these shootings:

GEORGE STEPHANOPOULOS: I'm here with Cecilia Vega as you did see those words, Cecilia, the president condemning racism, bigotry and white supremacy. As recently as just a few weeks ago, he was downplaying the problem of white nationalism.

CECILIA VEGA: ...[O]ur Terry Moran was in the White House just a couple of months ago, and he asked, does he believe white nationalism is a growing threat? The president minced zero words and he said, no I don’t believe it is. David said it. I think a lot of people -- particularly the Democrats in the 2020 right now, will hear the president's words as empty, that they lacked self-reflection, and they might challenge him in saying his tenor and his tone, they're laying the blame directly at his feet this morning, for where we are in this country.

STEPHANOPOULOS: [T]he question is, how has his rhetoric contributed to the environment? Even though he can't be responsible for the murder itself.

"Notably, Mary, the president did not have an explicit call for new gun legislation there, for anything on background checks. That's one of the things the Democrats have been demanding," he gushed.

Democrats are trying to up the pressure. They are demanding that Mitch Mcconnell bring lawmakers back here to Washington to try and do something to address rising gun violence, but as we have seen time and time again, it does not seem that there is the political will or interest from Republican leaders to be addressing stricter gun measures at this time.

We are seeing an all too familiar pattern play out here, and unless you see increasing pressure coming from Republicans and coming from the president himself, it is very hard to see how Mitch Mcconnell is going to all of a sudden go ahead and comply with Democrats' requests that lawmakers come back here to try and tackle this.