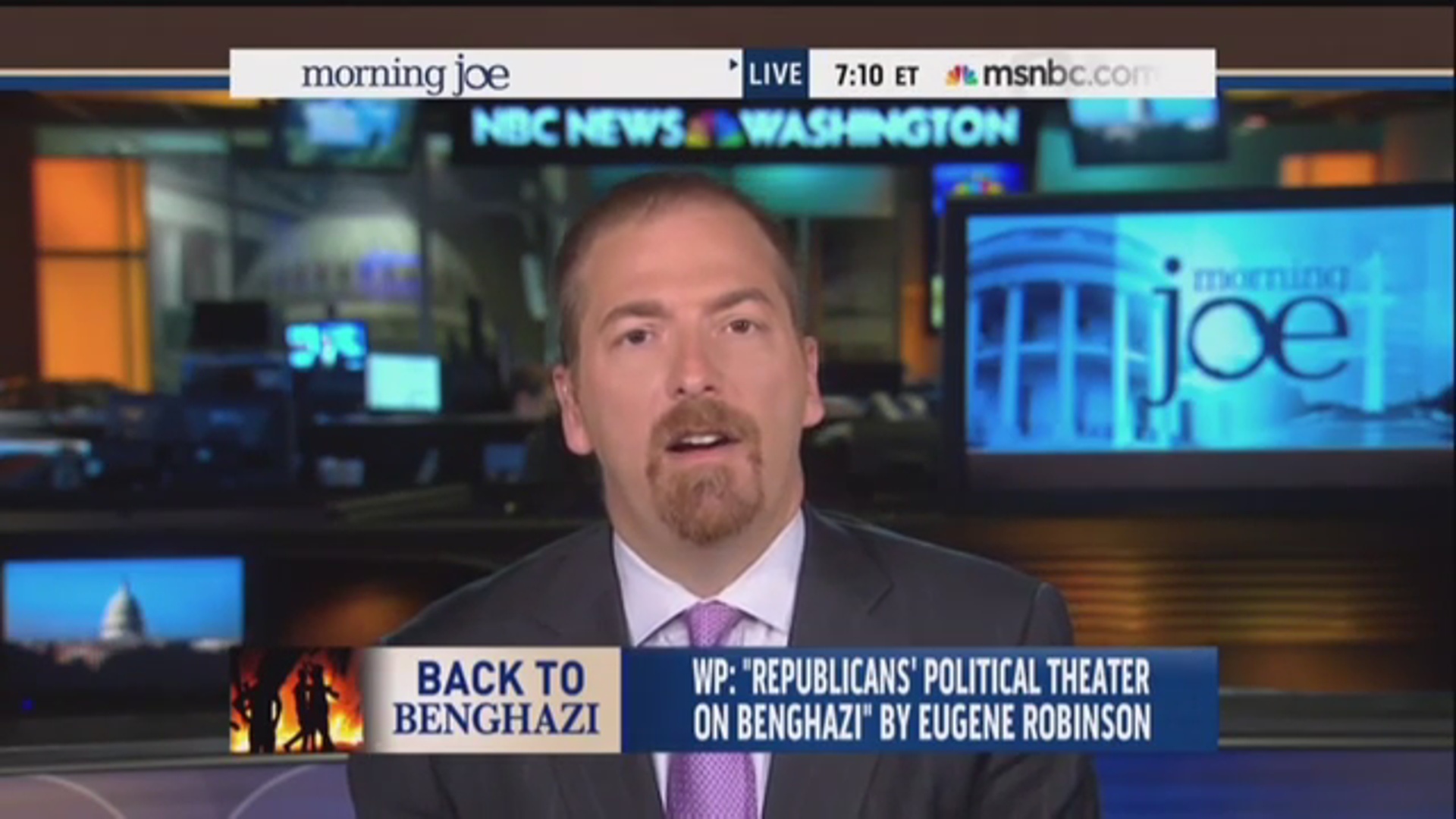 A “partisan” “witch hunt” that is wasting “taxpayer millions” is not how liberal journalists are describing current Democratic congressional investigations into Donald Trump’s finances and alleged Russian collusion.

No, those words are strictly reserved for when Republicans are investigating Democratic scandals  that involved Barack Obama, Bill and Hillary Clinton.

Benghazi, the IRS-Tea Party targeting scandal and the impeachment investigation into Bill Clinton were scoffed at by liberal reporters as nakedly partisan attacks or “distractions” from Democratic administrations advancing liberal policies.

The following are just few examples of liberal journalists singing a different tune about Congressional investigations when the targets were Democrats, as culled from the MRC archives:

“The amazing thing is that she [Hillary Clinton] does not even have to talk about a vast right-wing conspiracy and have people make fun of her for it, because they’re doing it on their own. I mean, for a party whose members don’t believe in assisted suicide, they’re doing a pretty good impression of it.”
— USA Today political writer Susan Milligan on the October 15, 2015 Hardball.

“We have the committee, the Benghazi committee this week. Well, she’s [Hillary Clinton] going to murder them because it has been a witch hunt. It has been partisan. It’s a great opportunity for her.”
— Veteran journalist Carl Bernstein on CNN’s Reliable Sources, October 18, 2015.

“‘Scandal’ is the Republicans’ word for it....So far, no one has determined there’s any scandal there.”
— CNN’s Legal View anchor Ashleigh Banfield to Democratic strategist Robert Zimmerman, October 9, 2015.

No Such Thing as an “Unanswered Question” About Benghazi

“It certainly looks more partisan than it looks like a serious inquiry....You know, I’ll hear from Republicans that say, ‘But there are unanswered questions!’ Well, no, all the questions have been answered. There’s just some people that don’t like the answers, that wish the answers were somehow more conspiratorial, I guess.”
— NBC political director and chief White House correspondent Chuck Todd on MSNBC’s Morning Joe, May 13, 2014.

“You know, the one thing that’s been a common theme throughout this first six months [of Obama’s second term] has been distractions, the ways in which pure politics has driven what ends up happening....On the Hill, we spent more time talking about the IRS and Benghazi and the NSA, and privacy and tapping or gathering information from our phones, than almost anything else. And now, is that just because it’s more interesting to talk about a distraction than to try to get policy done?”
— Host Gwen Ifill on PBS’s Washington Week, July 5, 2013.

Anchor Wolf Blitzer: “There were also some fireworks up on Capitol Hill today. A daylong hearing about the IRS, what’s the latest?”
Correspondent Dana Bash: “It was a very long day. And it was really less about trying to get to the bottom of why some groups waited for about three years for IRS tax-exempt status and a lot more about a partisan slugfest.”
— CNN’s The Situation Room, July 18, 2013.

Investigation Into IRS Scandal Is Racist Attack on Obama

“The IRS is being used in exactly the same way as they tried to use the President’s birth certificate...Despite the complete lack of any evidence linking the President to the targeting of Tea Party groups, Republicans are using it as their latest weapon in the war against the black man in the White House....This afternoon, we welcome the latest phrase in the lexicon of Republican attacks on this President – the IRS. Three letters that sound so innocent, but we know what you mean.”
— MSNBC host Martin Bashir on his self-titled show, June 5, 2013.

“Voters Will Punish” GOP If They Pursue Obama’s Scandals

Co-host Savannah Guthrie: “I read a headline yesterday that said Republicans see blood in the water, that they see a president who’s very vulnerable politically. Is there a danger that they will overreach?”
Correspondent Chuck Todd: “There is. I mean, that’s what happened to Republicans in 1998 with Bill Clinton. And if all of Congress is focusing on hearings to do scandals, the voters will punish them. They’ve done it in the past.”
— NBC’s Today, May 16, 2013.

Republicans Should Be “Sent Packing” for “Bogus” Case

“I can’t think of anything that would be better for the American Republic than to see some of the Republicans who brought this bogus, inflated case and have put the country through all this turmoil for the last, almost a year than for them to be sent packing.”
— Time national correspondent Jack E. White on MSNBC’s McLaughlin Special Report, February 10, 1999.

A Waste of Taxpayer Money

“This man has scarcely had a day in office untainted by accusations of scandal. His very frustrated political enemies have tried every imaginable attack on the President’s so-far impenetrable armor. There’s been Whitewater, Filegate, and Travelgate, each trumpeted in its time as the scandal that would bring down his presidency. All now revealed basically as next to nonsense. Miserable flops costing taxpayers millions.”
— Geraldo Rivera hosting his CNBC show Rivera Live, May 19, 1998.

“From the outset of the campaign finance hearings, Dan Burton has been a lightning rod for partisanship and accusation. His adversaries say he has run the committee with authoritarian zeal, that he’s steamrolled Democrats and shattered precedent.”
— CNN Washington Bureau Chief Frank Sesno beginning a profile of Burton, May 4, 1998 Inside Politics.