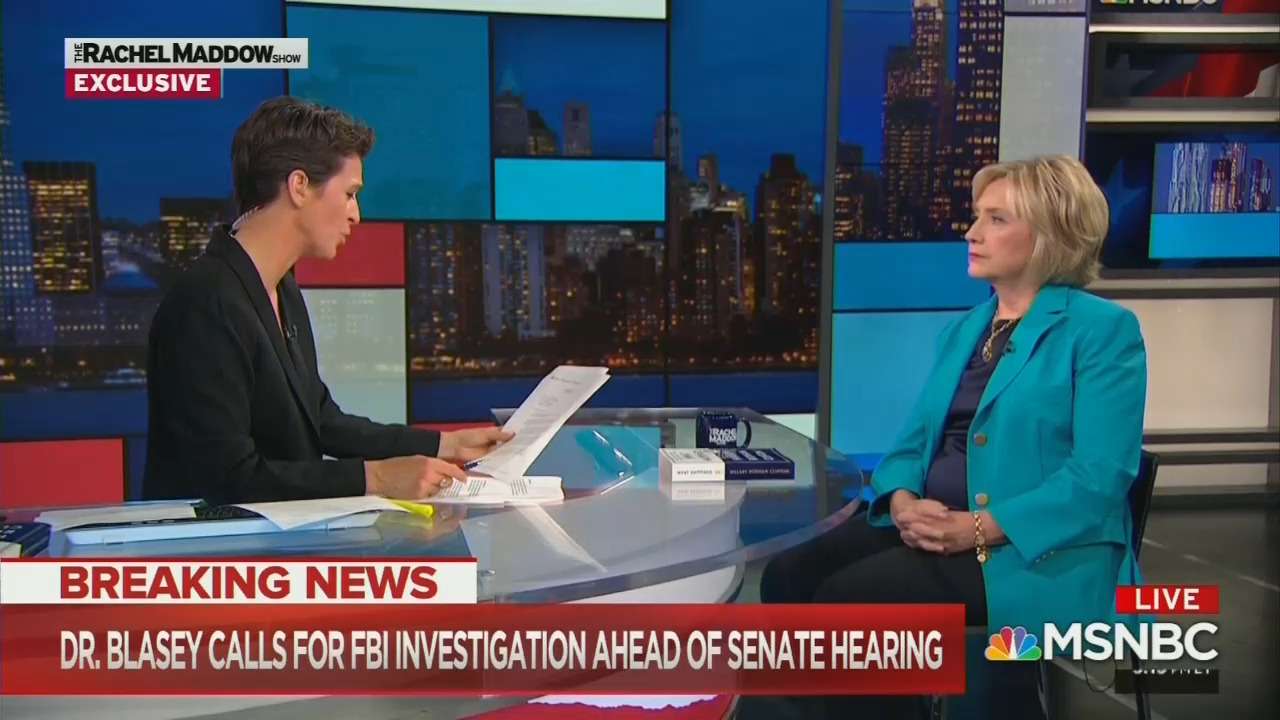 Of course Maddow never brought up the obvious hypocrisy, as she never even mentioned Juanita Broaddrick’s name to Clinton.

When pressed by MSNBC’s Rachel Maddow on whether the FBI should investigate Ford’s claims that she was assaulted by Brett Kavanaugh in 1982 Hillary Clinton agreed and insisted “I think she’s asking that she be given the courtesy of having some facts laid out.”

That’s a “courtesy” that Juanita Broaddrick never was accorded when she accused Bill Clinton of raping her in 1978. Last night, soon after the Maddow show ended, Broaddrick blasted the former First Lady: 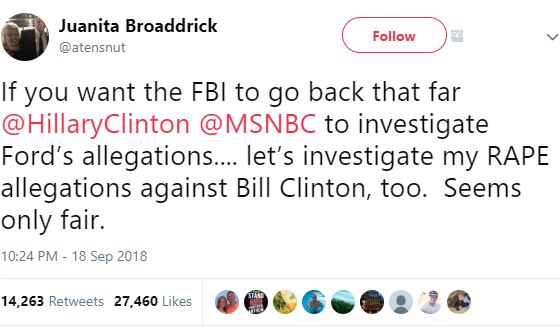 Not only was Broaddrick’s case never investigated by the FBI, but when Broaddrick’s accusation came to – during President Bill Clinton’s impeachment case in March 1998 – the media practically ignored her charges.

Back then ABC and CBS skipped it, and NBC aired just 7 minutes and 7 seconds of coverage.

The following is the relevant portion of the September 18 Rachel Maddow Show that caught Broaddrick’s ire:

RACHEL MADDOW: I have to ask you about some breaking news tonight.

RACHEL MADDOW: I imagine you've been following the twists and turns of the Brett Kavanaugh nomination.

RACHEL MADDOW: So heading into this evening, as we understand it, the plan had been for the Kavanaugh confirmation hearings essentially to reopen on Monday with testimony both from judge Kavanaugh and professor Christine Blasey Ford, who alleges that he attempted to rape her when he was 17 years old. Well, tonight, actually, just a few minutes ago Professor Blasey’s attorney has said that Professor Blasey will not testify on this matter until the FBI has investigated it. We just obtained a letter that she has sent to Senator Grassley in which she says –  I’ll just read you some of the letter.

“In the 36 hours since her name became public, Dr. Ford has received a stunning amount of support from her community and fellow citizens across our country. At the same time, however, her worst fears have materialized. She has been the target of vicious harassment and even death threats. As a result of these kinds of threats, her family was forced to relocate out of their home. Her e-mail has been hacked. She has been impersonated online. While Dr. Ford’s life was being turned upside down, you and your staff scheduled a public hearing for her to testify at the same table as Judge Kavanaugh in front of two-dozen senators on national television to relive this traumatic and harrowing incident. The hearing was scheduled for six short days from today and would include interrogation by senators who appear to have made up their minds that she is mistaken and mixed up. While no sexual assault survivor should be subjected to such an ordeal, Dr. Ford wants to cooperate with the committee and with law enforcement officials. As the committee has recognized and done before, an FBI investigation of the incident should be the first step in addressing her allegations. A full investigation by law enforcement officials will ensure that crucial facts and witnesses in this matter are assessed in a non-partisan matter and that the committee is fully informed before conducting any hearing or making any decisions. We’d welcome any opportunity to talk with you.”

Essentially the lawyer is saying the FBI needs to look into this, and the investigation needs to be conducted. The interviews need to be done by the FBI before she should testify. Do you have any reaction to that?

HILLARY CLINTON: I think that’s a reasonable request. The White House could answer it very quickly by asking the FBI to reopen its background check and to take into account the accusation that’s been made and to gather the evidence about what can be known. So far they haven’t done that, and as someone who has watched this process unfold over many years, there does have to be some direction given to the FBI to pursue an investigation. I don’t think it would be a lengthy investigation. I think it could be done in an expeditious manner. If they’re still trying to have a vote on this nominee. They could postpone for two weeks and probably get a lot more information than they have now. Because what they have done, as her lawyers point out, is put Dr. Ford in the position of having to make her case without any kind of investigation that could be either helpful or detrimental to her. And I think she’s asking that she be given the courtesy of having some facts laid out.

And, you know, I heard Kellyanne Conway say we shouldn’t be subjecting her to insult. And I think you can’t avoid the appearance of insult if you don’t have an investigation so that she is, you know, able to be evaluated fairly. And what I think the White House and the Republicans on the committee are trying to do is, you know, basically put her in the dock and try to rush this through.