Ashamed of the USA: Journalists Disrespected the Flag Long Before Kaepernick 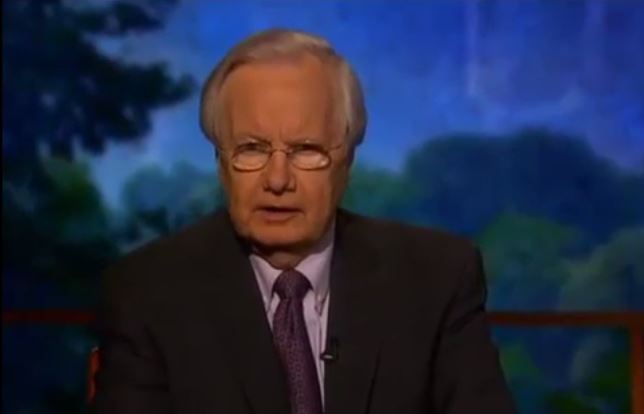 Journalists are falling over themselves to praise NFL players taking a knee in protest during the National Anthem, but this isn’t the first time members of the liberal media have shown disrespect towards a symbol of national unity. Even as this country was recovering from the wounds of 9/11 some leftists in the press were agonizing over the proliferation of flag-waving.

In October 2001 The Nation’s Katha Pollitt freaked out over her high school-aged daughter displaying the American flag because it “Stands for jingoism and vengeance and war.”

Former NBC Nightly News anchor Tom Brokaw scolded his colleagues who wore flag pins: “I don’t think a journalist ought to be wearing a flag because it does seem to be...a sign of solidarity toward whatever the government is doing.” In 2002, when Salt Lake City hosted the Winter Olympics, Brokaw’s buddies at the Today show were embarrassed by overt signs of patriotism. Katie Couric fretted the “patriotic” feel of the opening ceremony could be interpreted as “arrogant nationalism” and Matt Lauer sheepishly warned: “We have to also be careful and draw a line not to let our patriotism get in the way of the games in general.”

And in 2003, PBS’s Bill Moyers ranted: “When I see flags sprouting on official lapels, I think of the time in China when I saw Mao’s Little Red Book on every official’s desk, omnipresent and unread....More galling than anything are all those moralistic ideologues in Washington sporting the flag in their lapels while writing books and running Web sites and publishing magazines attacking dissenters as un-American.”

The following are some of the most obnoxious examples, via the MRC’s archive, of liberal journalists either bashing or being embarrassed by proud support of patriotic symbols like the American Flag, National Anthem and Pledge of Allegiance.

Despising the Stars and Stripes

“My daughter, who goes to Stuyvesant High School only blocks from the World Trade Center, thinks we should fly an American flag out our window. Definitely not, I say: The flag stands for jingoism and vengeance and war. She tells me I’m wrong - the flag means standing together and honoring the dead and saying no to terrorism. In a way we’re both right....[The flag] has to bear a wide range of meanings, from simple, dignified sorrow to the violent anti-Arab and anti-Muslim bigotry that has already resulted in murder, vandalism and arson around the country and harassment on New York City streets and campuses.”
— The Nation’s Katha Pollitt in an October 8, 2001 column.

The Pledge of Allegiance = “A Whopper of a Lie”

“The next time you say the Pledge of Allegiance...remember: It’s a lie. A whopper of a lie. We coax it from the mouths of babes for the same reason our politicians wear those flag pins in their lapels – it makes the hypocrisy go down easier, the way aspirin helps a headache go away...‘Justice for all’ is a line item in the budget, sequestered now by the Paul Ryans of Congress and the fix-the-debt gang of plutocratic CEOs who, with a wink-wink from our President, claim, ‘Oh, we can’t afford that!’ Of the $146 billion spent every year on criminal justice in this country, only two to three percent goes to defend the poor. Of 97 countries, we rank 68th in access to and affordability of civil legal service. No, we can’t afford it, but just a decade ago we started shelling out $2.2 trillion for a war in Iraq born of fraud.”
— Bill Moyers on PBS’s Moyers & Company, March 31, 2013.

“I decided to put on my flag pin tonight...I put it on to take it back. The flag’s been hijacked and turned into a logo the trademark of a monopoly on patriotism. On those Sunday morning talk shows, official chests appear adorned with the flag as if it is the Good Housekeeping Seal of Approval, and during the State of the Union did you notice Bush and Cheney wearing the flag?...When I see flags sprouting on official lapels, I think of the time in China when I saw Mao’s Little Red Book on every officials desk, omnipresent and unread....More galling than anything are all those moralistic ideologues in Washington sporting the flag in their lapels while writing books and running Web sites and publishing magazines attacking dissenters as un-American....I put it on to remind myself that not every patriot thinks we should do to the people of Baghdad what bin Laden did to us.”
— Bill Moyers on PBS’s Now, February 28, 2003. 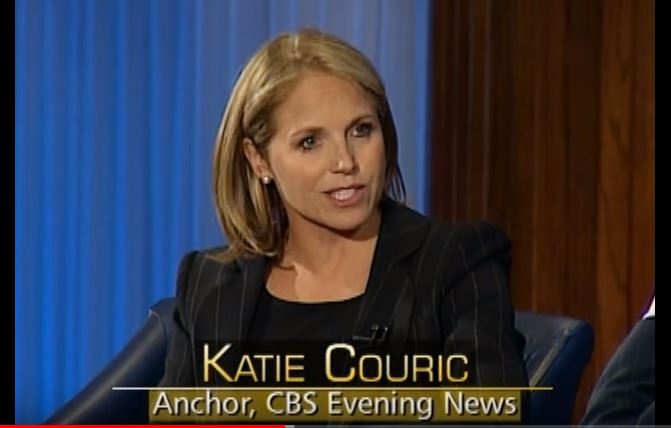 “You know, the whole culture of wearing flags on your lapel and saying ‘we’ when you were referring to the United States, which, and, and, you know, even the ‘shock and awe’ in the initial stages, it was just too jubilant and just a little uncomfortable....Anyone who questioned the administration was considered unpatriotic.”
— CBS Evening News anchor Katie Couric talking to former CBS and NBC correspondent Marvin Kalb on the September 25, 2007 Kalb Report shown on C-SPAN2.

Editor: I Want to Burn the Flag

“If the U.S. Senate follows its silly siblings in the House of Representatives and votes for a ban on burning the American flag, I’m going to burn one. It never occurred to me to burn a flag — except in some flag-retiring ceremony — but just the idea that Congress has nothing better to do than spend time on this nutty issue makes me want to burn one.”
— Linda Grist Cunningham, Executive Editor of the Rockford Register Star in Illinois, in a June 26, 2005 column.

“I’m a patriot...[but] I don’t think a journalist ought to be wearing a flag because it does seem to be, to me at least, a sign of solidarity toward whatever the government is doing, and that is not our role.”
— Tom Brokaw to Northwestern University journalism students on Oct. 1, 2001 as quoted in the Daily Northwestern, Oct. 2, 2001.

Phil Donahue: “Let me tell you what is impressive. You’re not wearing a flag. Well, I don’t want to damn you with my praise, but I say hip-hip-hooray for that, and I think you gave the right answer when you spoke at Northwestern University....”
Tom Brokaw: “Right. I said, you know, I wear a flag in my heart, but I think if you wear a flag, it’s a suggestion somehow that you’re endorsing what the administration is doing at the time. And I don’t think journalists ought to be wearing flags.”
Donahue: “And I say hear, hear, hear.”
— Exchange on MSNBC’s Donahue, July 25, 2002. 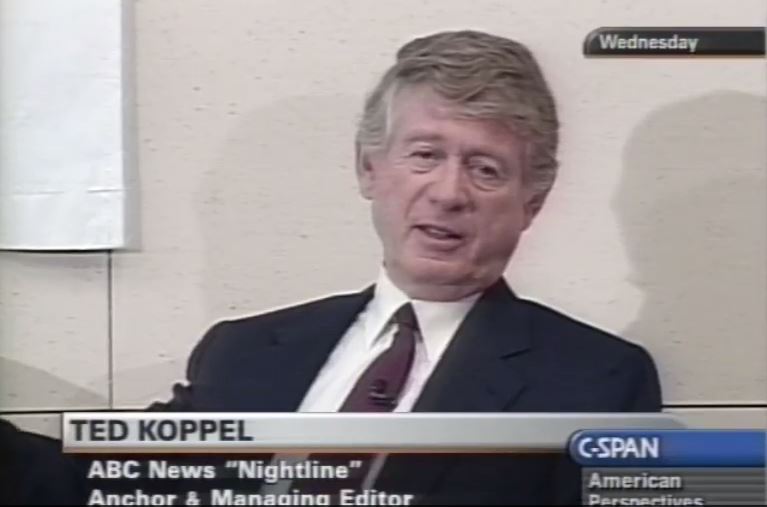 “I don’t believe that I’m being a particularly patriotic American by slapping a little flag in my lapel and then saying anything that is said by any member of the U.S. government is going to get on without comment and anything that is said by someone from the enemy is immediately going to be put through a meat grinder of analysis. Our job is to put it all through the meat grinder of analysis.”
— ABC’s Ted Koppel at an October 31, 2001 Brookings Institution forum, “The Role of the Press in Wartime.”

“One of the controversies after September 11th has been the suggestion of jingoism in the press, people wearing flag pins in their lapels, using language very supportive of the war effort and that sort of thing, and you had a memo that was published about balance. Tell me what you think about that, whether you think the news media went overboard and what you were trying to accomplish with that memo. When you looked at the media generally, did you see jingoism and flag waving that offended you or influenced you one way or the other?”
— PBS media reporter Terence Smith’s questions to CNN Chairman Walter Isaacson in a Jan. 28, 2002 interview posted on PBS’s Web site as a sidebar to a March 5, 2002 NewsHour segment on the three major cable news channels.

“The CNN film [The Flag], based on a book by David Friend, focuses on the smudged American flag that three firefighters raised through the dust of the collapsed buildings at ground zero late in the afternoon of Sept. 11, 2001. A photograph of the flag raising taken by Thomas E. Franklin of the New Jersey newspaper The Record became a heartening, patriotic symbol for many on an otherwise awful day....A plan to turn the photograph into a sculpture became a source of controversy. Nationwide, flag-waving was sometimes a cousin to intolerance.”
— From New York Times critic Neil Genzlinger’s September 4, 2013 review of CNN’s The Flag.

“A friend of ours, a prominent member of the ‘liberal media,’ wrote to the head of our kids’ school last week suggesting that students spend more time with the Pledge of Allegiance and The Star-Spangled Banner. The principal agreed. Our 10-year-old daughter asked her mother if we could put a flag on our car. My wife reluctantly agreed, but hasn’t procured the flag yet....My wife essentially shares our daughters feelings. But for her, the symbol of the flag was appropriated in her youth by counter-protesters who used it to deny the patriotism of the wars opponents. Flag-waving feels aggressive to her.”
— Former CBS Evening News producer Dick Meyer in a commentary posted October 1, 2001 on CBSNews.com.

Matt Lauer: “You are expecting a greater wave of patriotism here in the United States, in this particular time, than other countries have shown when they’ve hosted the games.”
Lloyd Ward, U.S. Olympic Committee President: “I certainly expect the stands to be rocking. I expect the flags to be flying. And you know, the expression of patriotism is fine for any country that hosts the Olympics. We want to express our nationalism as a part of the world’s community and I expect to see that.”
Lauer: “But we have to also be careful and draw a line not to let our patriotism get in the way of the games in general.”
— Exchange on NBC’s Today, February 7, 2002.

“Obviously, the opening ceremony, the games themselves will be very patriotic in feel. And yet sometimes the international community can interpret that as arrogant nationalism. Obviously, you’ve gotta balance those two things. Are you all, clearly you’re mindful of that. How are you, how are you going to do that?”
— NBC’s Katie Couric questioning Salt Lake Olympic Committee Creative Director Scott Givens on Today, Feb. 8, 2002.

Aaron Brown: “Is there too much red, white and blue there? How much is too much? Some thoughts on patriotism tonight and September 11th and the games from one of our favorite guests on the program, Anne Taylor Fleming, who joins us from Los Angeles.”
Anne Taylor Fleming: “The whole idea of patriotism really infecting the games in a positive or negative way I mean, we had enough trouble in Atlanta during a time of peace, sort of restraining ourselves. That was a really, I thought, sort of swaggery performance by the country. And you know, I’m just girded for it, and hope it doesn’t happen....It’s just a time to mute our swagger. I mean, it is the time to comport ourselves gracefully as a member of the world. And I’m just hoping, you know, maybe against hope, that we are respectful and that the jingoism is muted.”
— Discussion of the 2002 Winter Olympic games on CNN’s NewsNight, February 8, 2002.

Disgusted By the Star-Spangled Banner

“Oh say, we’ve seen too much. The Star-Spangled Banner pushes like a cough through America’s mouth and the twilight’s last gleaming is just that, a sickly flash above our heads as we ride unsuspecting in the bellies of sleek trains, plop to our knees in churches, embracing truths that disgust us.”
— Boston Globe arts critic and “poet” Patricia Smith in The Nation’s “Patriotism” issue, July 15/22, 1991.