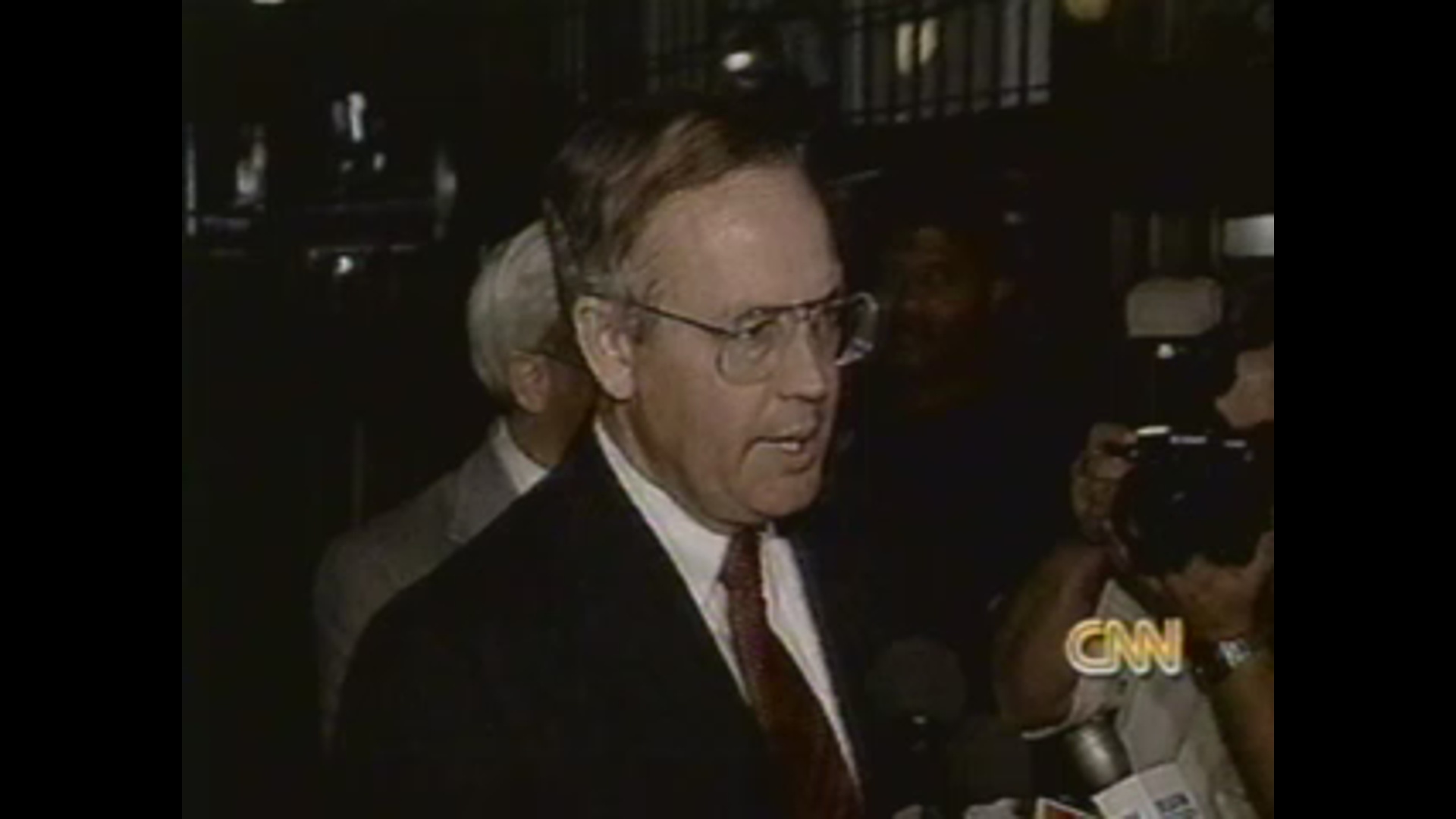 The liberal media’s message to Donald Trump is clear. Don’t even dare think about removing Robert Mueller from his position as Special Prosecutor. Such a decision would be considered a “radical” and “dangerous” move against a man “even Republicans” have a deep respect for.

However, this was hardly the stance the liberal media took when Ken Starr was first appointed to look into Bill Clinton’s Whitewater scandal in the nineties. Back then, Starr was accused of “McCarthyism” and conducting a “Salem witch trial” into a “parody of a political scandal.” Then Today show host Katie Couric asked famed Watergate-era journalist Bob Woodward if the media was “too scandal-obsessed?” It would be hard to imagine any member of the liberal media today asking if today’s reporters were too “scandal-obsessed” with Trump?

On the contrary, MSNBC host Rachel Maddow, as a guest on the July 20 edition of MSNBC’s The Last Word with Lawrence O’Donnell, tied Trump to Watergate: “Whether it’s Paul Manafort’s finances, whether it’s this news in The Washington Post tonight that Mueller may be able to get access to several years of Trump’s tax returns, I don’t know what the trigger is, but something has triggered the president. So that he is considering remarkably unprecedentedly radical choices for how to get this thing over with. Unprecedented , including Watergate.” The New York Times’ Maggie Haberman, on the July 19 CNN Tonight called the potential firing of Mueller a “dangerous” proposition for Trump. And on the July 23 edition of CBS’s Face the Nation, moderator John Dickerson warned “Even Republicans reacted negatively to the idea.” His colleague Nancy Cordes noted “Respect for Mueller runs deep on Capitol Hill, especially among Republicans.”

But during the Clinton years, the media was singing a far different tune when it came to Ken Starr. The following is a collection, culled from the MRC’s archives, of liberal journalists running interference for then President Bill Clinton as they depicted Starr as an out of control prosecutor:

“The fact is what we have here is a modern Salem witch trial with no accusations, no evidence: trial by ordeal.”
—  Boston Globe columnist and former reporter Tom Oliphant on the syndicated Inside Washington, January 15, 1994.

“Whitewater has been overdone by far. There have been too many rumors published, too many errors made and too much rushing to judgment without the facts.”
—  Jack Nelson, Los Angeles Times Washington Bureau Chief, in the April 14, 1994 Boston Globe.

“Give me the facts, give me a real scandal, but do not give me this real scandal, this shrill barking, this rumor mill, this mindless plunge off....This is not investigative journalism. Sometimes it is propaganda, but mostly it's the hot wind of a mob all shouting into each other's faces.”
— Former Wall Street Journal reporter Ellen Hume in a National Press Foundation session on Whitewater, shown on C-SPAN, April 19, 1994.

“This is a desperate attempt by the Republicans to make a scandal out of something that isn’t. They’ve overreached on Whitewater and they’re trying to recoup on their investment.”
— Newsweek’s Eleanor Clift on the syndicated McLaughlin Group, July 30, 1994.

“But Whitewater so far is a parody of a political scandal, full of sound and fury, signifying next to nothing. If it walks like a duck and talks like a duck, it must be a...turkey.”
—  Newsweek Senior Editor Jonathan Alter, August 8, 1994 issue. 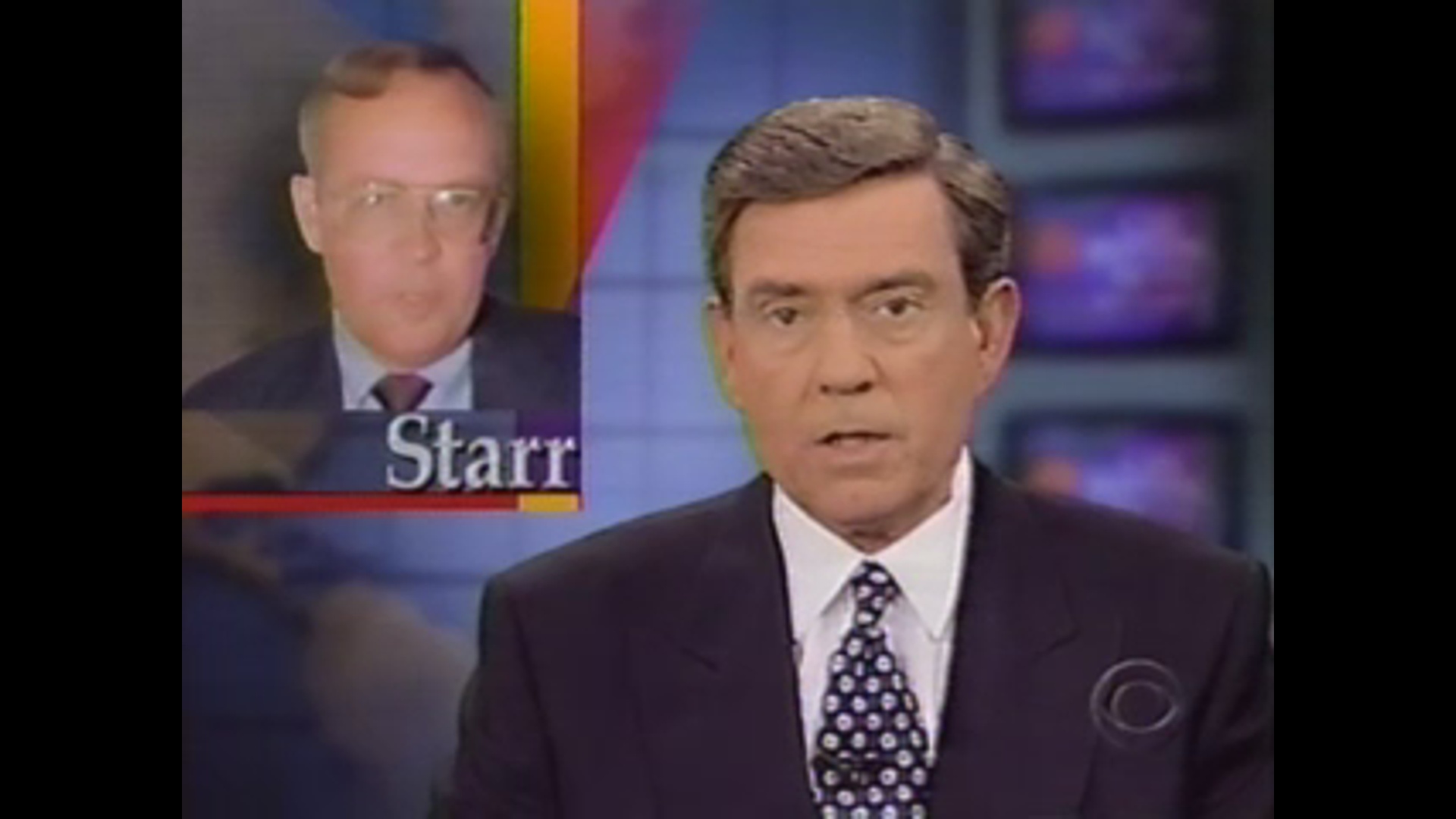 “There is growing controversy tonight, about whether the newly named independent counsel in the Whitewater case is independent or a Republican partisan allied with a get-Clinton movement. Among the questions about Kenneth Starr are these: the involvement of anti-Clinton activists in pushing for Starr's appointment to replace Robert Fiske.”
—  Dan Rather on the CBS Evening News, August 8, 1994.

“New disclosures are fueling questions about whether or not Starr is an ambitious Republican partisan backed by ideologically-motivated, anti- Clinton activists and judges from the Reagan, Bush, and Nixon years.”
— Rather on the CBS Evening News, August 12, 1994.

“If Ken Starr is a credible prosecutor he will bring this to a conclusion and the Clintons will be exonerated.”
— Newsweek’s Eleanor Clift on the syndicated McLaughlin Group, February 10, 1996.

“Polls in the past, Mr. Gingrich, have said that: a) the American people really don't understand Whitewater; and b) they really don't care about it. Is there a reason for hearings now, other than to inflict political damage on the President prior to the elections?”
—  Today substitute co-host Matt Lauer interviewing Gingrich, May 18, 1995.

More Concerned About Investigators Than Investigated

“The Whitewater scandal occupied key committees in both the House and Senate last week - a two-ring circus whose single goal seemed to be causing maximum embarrassment to Bill and Hillary Clinton and their friends.”
— Opening sentence of August 21, 1996 Newsweek story headlined “An End in Sight (Maybe), Whitewater: Trying to finish the investigations.” Story written by Mark Hosenball and Michael Isikoff.

Wiping Away the Whitewater Report

“These two dueling reports, the Democrats are real hear no evil, see no evil, speak no evil. And the Republicans come, I think, very close to McCarthyism. They raise the idea of suspicious circumstances, to almost just an assumption of guilt.”
— NPR reporter Nina Totenberg on the syndicated Inside Washington, June 22, 1996.

Don’t Tie Down Our Boy 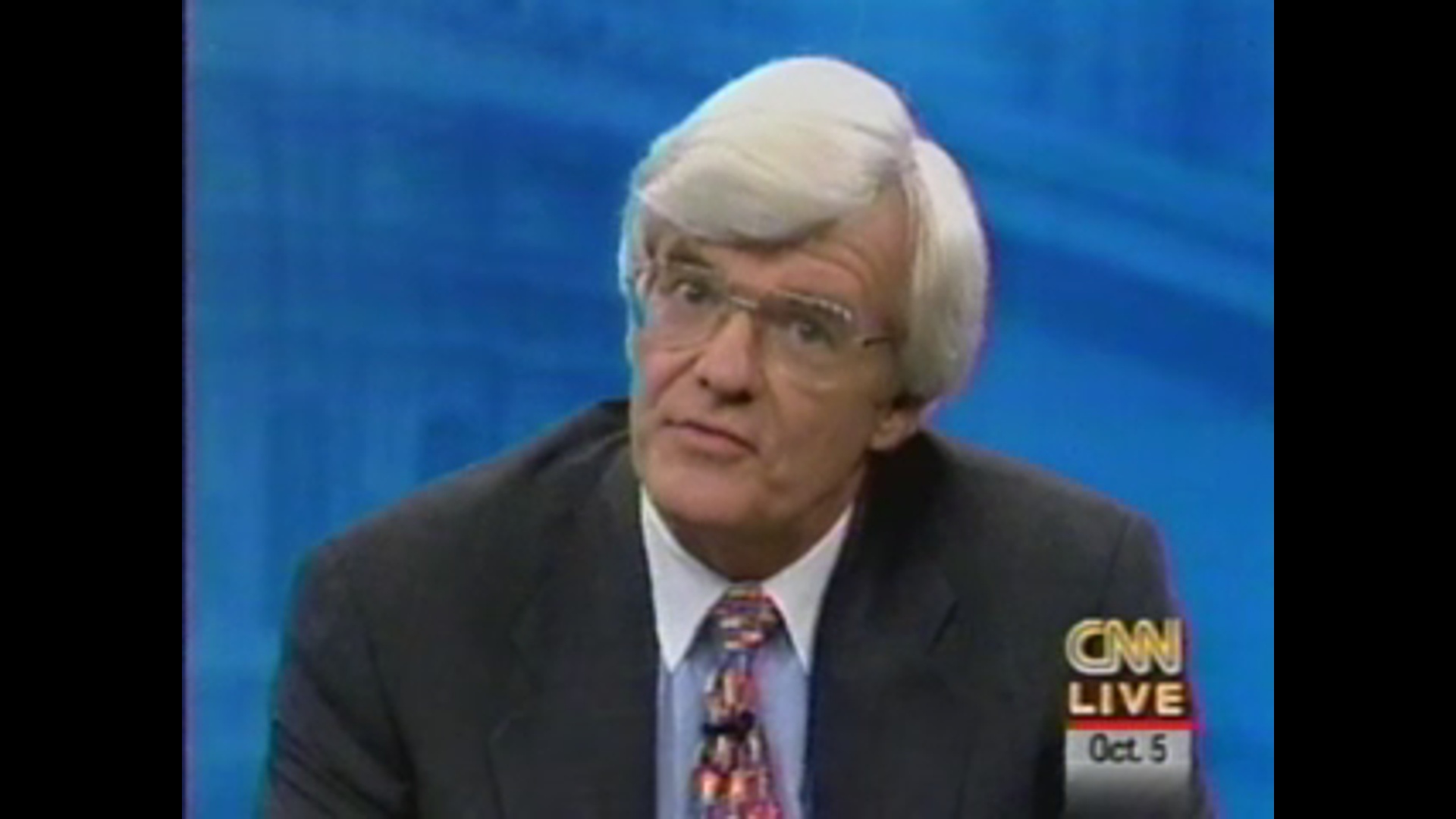 “Kenneth Starr, the supposedly non-partisan independent counsel investigating the Clintons, was the featured speaker yesterday at a luncheon sponsored by right wing hatemonger Pat Robertson [who runs the] Christian Broadcasting Network and Regent Law School. By pandering to Clinton-haters, Mr. Starr appears to be abandoning all pretenses of impartiality. He went into this job with a reputation as a fair-minded conservative. He now looks more like a political hit man desperately eager for a future Supreme Court appointment.”
—  Al Hunt’s Outrage of the Week on CNN’s Capital Gang, October 5, 1996.

“How concerned is the President about the potential of his being, sort of, tied down as Gulliver was by the Lilliputians, by all this scandal investigation, ethics investigations that are bound to be unleashed?”
—  Dan Rather to Vernon Jordan election night, November 5, 1996.

“The press is on a rampage. We cannot afford a failed presidency, especially if it falsely damaged by innuendo, speculation and hyperinflated interpretation of events a decade or more ago.”
— Editor-in-Chief Mort Zuckerman in the April 11, 1994 issue of Newsweek.

“Let’s define what we mean by attacks on Kenneth Starr. Its fair game to point out that he is a partisan Republican, that he defends the tobacco interests...Yes! He got his job under very seamy circumstances. That’s fair game.”
—  Newsweek’s Eleanor Clift on the syndicated McLaughlin Group, November 16, 1996. 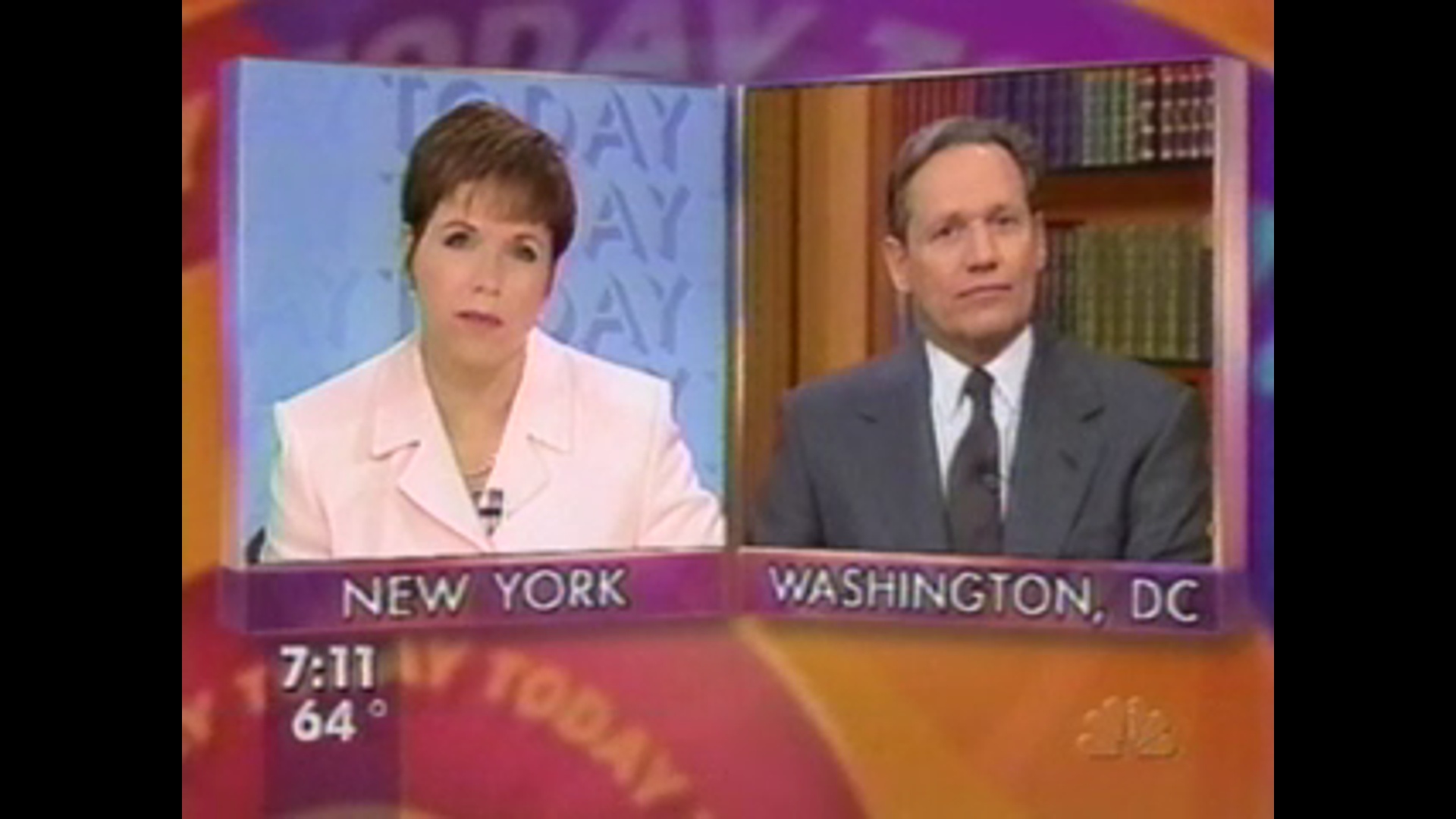 “But are members of the media, do you think, Bob, too scandal-obsessed, looking for something at every corner?”
—  Host Katie Couric to Bob Woodward on NBC’s Today, June 17, 1997.

“I think Ken Starr is, is bound and determined to make James Carville look good. James Carville is the President’s attack dog who’s been after Ken Starr for so long and every time the, another story surfaces in which it seems like Ken Starr is being a little bit too aggressive, going after things which are a little bit seemingly off the point that in, in ways that he can't necessarily justify, he feeds into that.”
—  NBC News reporter Gwen Ifill, on PBS’s Washington Week in Review, June 27, 1997.

“I think what Starr is doing here, he’s got his prosecutors’ explanations and so on, but what he’s really doing is playing with the long-term credibility of the institution of special prosecutors. I think people’s patience is running out with that. And, you know, there may be a day in the country’s history when we really need a special prosecutor, and I'm not sure that the currency won’t have been spent by then.”
—  New York Times Supreme Court reporter Linda Greenhouse, same show.