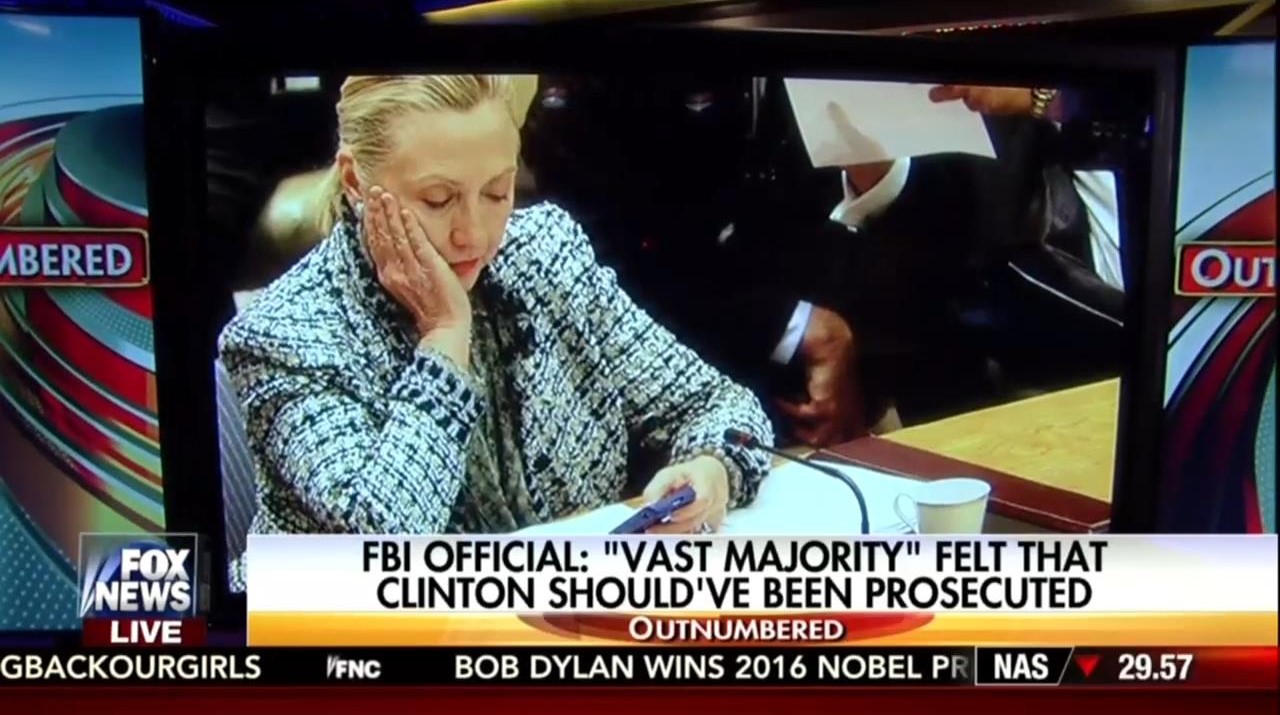 Agents and attorneys at the FBI and State Department are furious about how FBI directory James Comey let Hillary Clinton off the hook and they are finally speaking out. However, if you get your news from the Big Three (ABC, CBS, NBC) networks you’ve heard nothing about it.

Fox News and The New York Post have cited current and former agents in stories that paint a picture of an FBI and State Department full of hard-working employees who are irate at the way Clinton escaped prosecution over her e-mail scandal.

On Thursday, Fox News’s Malia Zimmerman and Adam Housley cited an unnamed source that claimed members of the investigative team were dismayed and disgusted. And back on October 6 the New York Post’s Paul Sperry cited retired agents that had charged “The FBI has politicized itself, and its reputation will suffer for a long time” and claimed the accommodations given to Clinton and her aides were “unprecedented.”

But that’s not the only Clinton scandal revelation that has been either ignored or underreported in recent weeks.

The following is a brief list of just some of those controversies and how they have or not  been covered by the Big Three network evening and morning shows:

FBI and State Department Officials Speak Out on E-Mail Investigation

On October 13, Fox News’s Zimmerman and Housley reported the following:

“The decision to let Hillary Clinton off the hook for mishandling classified information has roiled the FBI and Department of Justice, with one person closely involved in the year-long probe telling FoxNews.com that career agents and attorneys on the case unanimously believed the Democratic presidential nominee should have been charged.

The source, who spoke to FoxNews.com on the condition of anonymity, said FBI Director James Comey’s dramatic July 5 announcement that he would not recommend to the Attorney General’s office that the former secretary of state be charged left members of the investigative team dismayed and disgusted. More than 100 FBI agents and analysts worked around the clock with six attorneys from the DOJ’s National Security Division, Counter Espionage Section, to investigate the case.

“No trial level attorney agreed, no agent working the case agreed, with the decision not to prosecute -- it was a top-down decision,” said the source, whose identity and role in the case has been verified by FoxNews.com. A high-ranking FBI official told Fox News that while it might not have been a unanimous decision, “It was unanimous that we all wanted her [Clinton’s] security clearance yanked.” “It is safe to say the vast majority felt she should be prosecuted,” the senior FBI official told Fox News. “We were floored while listening to the FBI briefing because Comey laid it all out, and then said ‘but we are doing nothing,’ which made no sense to us.”

Zimmerman and Housley’s piece also included those willing to go on the record:

The claim also is backed up by a report in the New York Post this week, which quotes a number of veteran FBI agents saying FBI Director James Comey “has permanently damaged the bureau’s reputation for uncompromising investigations with his cowardly whitewash of former Secretary of State Hillary Clinton’s mishandling of classified information using an unauthorized private email server.”

“The FBI has politicized itself, and its reputation will suffer for a long time. I hold Director Comey responsible,” Dennis V. Hughes, the first chief of the FBI’s computer investigations unit, told the Post. Retired FBI agent Michael M. Biasello added to the report, saying, “Comey has singlehandedly ruined the reputation of the organization.” Especially angering the team, which painstakingly pieced together deleted emails and interviewed witnesses to prove that sensitive information was left unprotected, was the fact that Comey based his decision on a conclusion that a recommendation to charge would not be followed by DOJ prosecutors, even though the bureau’s role was merely to advise, Fox News was told.

“Basically, James Comey hijacked the DOJ’s role by saying ‘no reasonable prosecutor would bring this case,’” the Fox News source said. “The FBI does not decide who to prosecute and when, that is the sole province of a prosecutor -- that never happens. “I know zero prosecutors in the DOJ’s National Security Division who would not have taken the case to a grand jury,” the source added. “One was never even convened.” 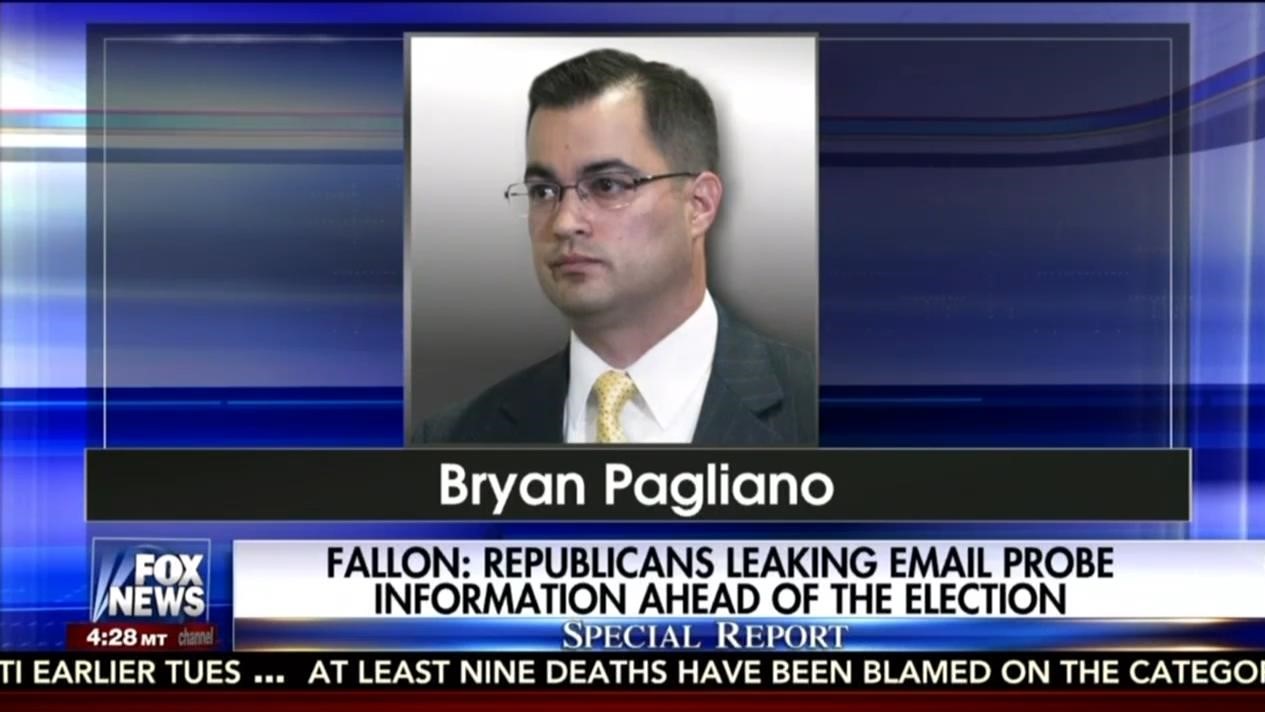 “The tech specialist who scrubbed Hillary Clinton’s email archive and was recently found to have sought help on Reddit for how to hide a certain ‘VIP’s’ email address was acting at the behest of Clinton aides Cheryl Mills and IT specialist Bryan Pagliano, a top House Republican charged Wednesday. ‘The clincher: just last week, he’s going online and trying to delete these Reddit posts,’  Rep. Jim Jordan of Ohio said of Colorado-based tech specialist Paul Combetta, who reached a limited immunity deal with the Justice Department. ‘He’s trying to cover up his tracks, he’s trying to cover up the cover up.’

After a House Judiciary Committee hearing, Jordan pointed to the FBI’s timeline of the investigation released to Congress and to the public online. The FBI records show July 2014 was a pivotal month for Clinton’s aides and support staff because that summer the State Department warned Clinton’s then-chief of staff Cheryl Mills that ‘a request for Clinton’s work-related emails would be forthcoming’ from Congress.
On July 23, 2014 Combetta got a call from Mills and the following day, he got an email from Clinton IT specialist Pagliano, who set up the server.

On July 24, Combetta went online to Reddit where he asked for help stripping out ‘a VIP’s (VERY VIP) email address from a bunch of archived emails.’ He also wrote, ‘Basically, they don’t want the VIP’s email address exposed to anyone.’

Jordan told Fox after the hearing the ‘they’ Combetta referred to could only be Mills and Pagliano, based on the FBI’s own records. Like Combetta, Mills and Pagliano were granted limited immunity deals by the Justice Department, but in such a high profile case, legal experts said the deals would not go through without senior FBI leadership consultation. 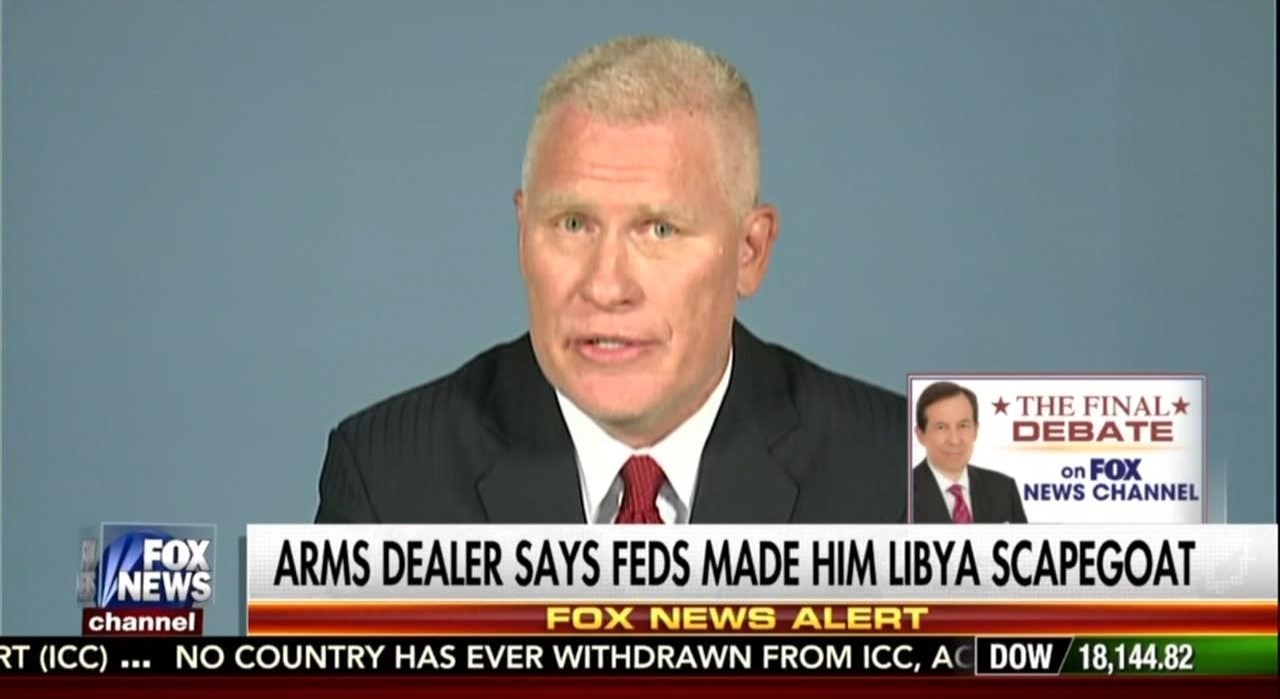 “American arms dealer Marc Turi, in his first television interview since criminal charges against him were dropped, told Fox News that the Obama administration -- with the cooperation of Hillary Clinton’s State Department -- tried and failed to make him the scapegoat for a 2011 covert weapons program to arm Libyan rebels that spun out of control. ‘I would say, 100 percent, I was victimized…to somehow discredit me, to throw me under the bus, to do whatever it took to protect their next presidential candidate,’....The 48-year-old Arizona resident has been at the epicenter of a failed federal investigation led by the Justice Department spanning five years and costing the government an estimated $10 million or more, Turi says.

Turi says the Justice Department abruptly dropped the case to avoid public disclosure of the weapons program, that was designed to force the ouster of Libyan dictator Muammar Qaddafi during the 2011 Arab Spring.

‘Those transcripts from current as well as former CIA officers were classified,’ Turi said of the evidence. ‘If any of these relationships [had] been revealed it would have opened up a can of worms. There wouldn’t have been any good answer for the U.S. government especially in this election year.’ The Justice Department faced a deadline last week to produce records to the defense. Turi says he was specifically “targeted by the Obama administration “and “lost everything--my family, my friends, my business, my reputation.”