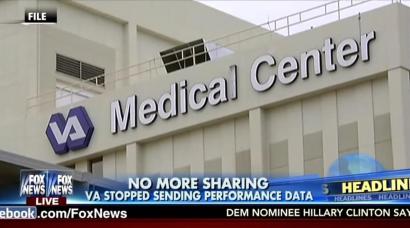 On Monday, USA Today’s Donovan Slack reported that over the summer the V.A. “quietly stopped sharing data on the quality of care at its facilities with a national database for consumers despite a 2014 law requiring the agency to report more comprehensive statistics to the site so veterans can make informed decisions about where to seek care.”

So far, none of the broadcast networks have reported on this latest development, in the ongoing Obama Administration scandal, on their evening or morning programs.

FNC’s Ainsley Earhardt, on the September 13 Fox & Friends, did the job the networks failed to do, when she filed the following brief:

AINSLEY EARHARDT, FOX & FRIENDS CO-HOST: The V.A. is under fire, once again. The Department of Veterans Affairs no longer sharing data on the quality of care at its medical centers on a national healthcare website. It was required to do so after the wait time scandal. The V.A. says the Health and Human Services Department told them to stop, until they could find a new way to share all the data.