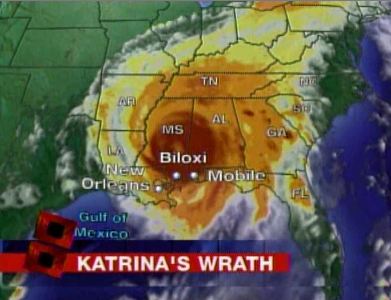 Ten years ago this week, Hurricane Katrina struck New Orleans and it wasn’t long after the devastation that liberal reporters, hosts and columnists politicized the tragedy - from the left. Everything from George W. Bush’s “big oil” buddies to America’s racism to even tax cuts were blamed for the high human toll.

CBS’s Nancy Giles raged:“We’ve repeatedly given tax cuts to the wealthiest and left our most vulnerable American citizens to basically fend for themselves” and added that Bush bypassed “thousands of victims, mostly black and poor” that “needed to see that he gave a damn.” Ex-New York Times editor Howell Raines charged: “The churchgoing cultural populism of George Bush has given the United States an administration that worries about the House of Saud and the welfare of oil companies while the poor drown in their attics.” And The Daily Show’s Jon Stewart crudely claimed that Katrina was “Bush’s Monica Lewinsky. One difference...tens of thousands of people weren’t stranded in Monica Lewinsky’s vagina.”

The following are the most obnoxious examples of the liberal media politicizing Hurricane Katrina from the MRC’s archives:

Bush Just Doesn’t Give a Damn

“After meeting with Louisiana officials last week, Rev. Jesse Jackson said, quote, ‘Many black people feel that their race, their property conditions and their voting patterns have been a factor in the response.’ He continued, quote, ‘I’m not saying that myself.’ Then I’ll say it: If the majority of the hardest hit victims of Hurricane Katrina in New Orleans were white people, they would not have gone for days without food and water, forcing many to steal for mere survival. Their bodies would not have been left to float in putrid water....We’ve repeatedly given tax cuts to the wealthiest and left our most vulnerable American citizens to basically fend for themselves....The President has put himself at risk by visiting the troops in Iraq, but didn’t venture anywhere near the Superdome or the convention center, where thousands of victims, mostly black and poor, needed to see that he gave a damn.”
— Contributor Nancy Giles on CBS’s Sunday Morning, September 4, 2005.

“For many of this country’s citizens, the mantra has been, as we were taught in social studies it should always be, whether or not I voted for this President, he is still my President. I suspect anybody who had to give him that benefit of the doubt stopped doing so last week. I suspect, also, a lot of his supporters, looking ahead to ’08, are wondering how they can distance themselves from the two words which will define his government, our government: New Orleans. For him, it is a shame, in all senses of the word. A few changes of pronouns in there and he might not have looked so much like a 21st century Marie Antoinette.”
— Keith Olbermann on MSNBC’s Countdown, Sept. 5, 2005.

“There have been some that have suggested that race has been a factor because so many of the people in New Orleans who have been suffering, as you well know, are African-American....Do you believe, if it was, in fact, a slow response, as many now believe it was, was it in part the result of racism?...There are some critics who are saying, and I don’t know if you’re among those, but people have said to me, had this happened in a predominantly white community, the federal government would have responded much more quickly. Do you believe that?”
— Wolf Blitzer to Democratic Representative Elijah Cummings on CNN’s The Situation Room, September 2, 2005.

Tax Cuts are at Fault!

NPR’s Nina Totenberg: “And let us say one other thing. For years, we have cut our taxes, cut our taxes and let the infrastructure throughout the country go, and this is just the first of a number of other crumbling things that are going to happen to us.”
Charles Krauthammer: “You must be kidding here.”
Moderator Gordon Peterson: “She’s not kidding.”
Totenberg: “I’m not kidding.”
— Exchange on Inside Washington, September 3, 2005.

“The dilatory performance of George Bush during the past week has been outrageous. Almost as unbelievable as Katrina itself is the fact that the leader of the free world has been outshone by the elected leaders of a region renowned for governmental ineptitude....The populism of Huey Long was financially corrupt, but when it came to the welfare of people, it was caring. The churchgoing cultural populism of George Bush has given the United States an administration that worries about the House of Saud and the welfare of oil companies while the poor drown in their attics and their sons and daughters die in foreign deserts.”
— Former New York Times Executive Editor Howell Raines in a Los Angeles Times op-ed, September 1, 2005.

Newsweek’s Joe Contreras: “The federal response has been lamentable....The response of the government of the most powerful, economically advanced, technologically sophisticated country paled alongside the relief efforts that I’ve seen [mounted by] Third World governments....”
MSNBC’s Natalie Allen: “And what in the world, in your opinion, explains it, Joe?”
Contreras: “For one thing, the federal government since 9/11 has been too fixated on the terrorist threat. I think also that President Bush, for yet another time, once again showed a lack of instant immediate leadership. Just as we saw him flitting around the country during those initial eleven hours after the attacks on the Twin Towers, we saw him once again at his ranch in Crawford.”
— MSNBC’s live hurricane coverage, September 5, 2005.

“Hurricane Katrina is perhaps the most economically destructive event in American history since the Great Depression, the last time the country responded with unprecedented sweeping changes to help the least fortunate. Today may demand an equal effort.”
— Reporter Chris Cuomo during an August 31, 2005 ABC News special, “In the Path of Katrina.”

“Do I need to be concerned that I’m going to go live with a church family, are they going to proselytize me, are they going to say, ‘You better come to church with me or else, I’m, you know, you’re not going to get your breakfast this morning’?”
— Co-host Harry Smith asking author/pastor Rick Warren about church families taking in those displaced by the hurricane, on CBS’s Early Show, September 6, 2005.

“The hurricane that struck Louisiana yesterday was nicknamed Katrina by the National Weather Service. Its real name is global warming....Unfortunately, very few people in America know the real name of Hurricane Katrina because the coal and oil industries have spent millions of dollars to keep the public in doubt about the issue....In 2000, big oil and big coal scored their biggest electoral victory yet when President George W. Bush was elected President — and subsequently took suggestions from the industry for his climate and energy policies. As the pace of climate change accelerates, many researchers fear we have already entered a period of irreversible runaway climate change.”
— Former Washington Post and Boston Globe reporter Ross Gelbspan in an August 30, 2005 Boston Globe op-ed.

“If there’s an upside to Katrina, it’s that the Republican agenda of tax cuts, Social Security privatization and slashing government programs is over. It may be too much to predict an upsurge of progressive government, but the environment and issues of poverty, race and class are back on the nation’s radar screen.”
— Eleanor Clift in her weekly “Capitol Letter” column published on Newsweek’s Web site, September 9, 2005.

George Stephanopoulos: “Did government neglect turn a natural disaster into a human catastrophe? And was it rooted in racism?”
Rapper Kanye West on NBC’s Concert for Hurricane Relief: “George Bush doesn’t care about black people.”
Stephanopoulos: “We’ll ask the only African-American in the Senate, Barack Obama, in an exclusive interview.”
— Stephanopoulos beginning ABC’s This Week, Sept. 11, 2005.

No Choppers for New Orleans?

“You know, I’ve been to some pretty lousy places in my life. And Iraq over the past 12 months and Banda Aceh, open graves and bodies. These were Americans, and everyone watching the coverage all week, that kind of reached its peak last weekend, kept saying the same refrain: ‘How is this happening in the United States?’ And the other refrain was, had this been Nantucket, had this been Boston, Cleveland, Chicago, Miami, Los Angeles, how many choppers would have – ”
— NBC Nightly News anchor Brian Williams on Comedy Central’s The Daily Show, September 8, 2005. Audience applause drowned out Williams as he was finishing.

“Today they sent him [President Bush] to the Chevron refinery in Pascagoula, Mississippi, as if reminding everybody of his oil connections and the government’s oil connections was not among the worst things he could do right now. Where did the political sharpshooters in this administration go?”
— MSNBC’s Keith Olbermann to Chris Matthews on the September 15, 2005 Countdown about 10 minutes before the President’s speech in New Orleans.

Clinton Felt Your Pain, Bush Flew Over It

“The Bush administration seemed clueless about the magnitude of the [Hurricane Katrina] disaster....President Bush lost his carefully cultivated image of competence. The President’s image of compassion was shaky to begin with, even though he calls himself a compassionate conservative. Bill Clinton felt your pain. George Bush flew over it.”
— CNN’s Bill Schneider on The Situation Room, June 1, 2006.