Dr. Carson Brushes Back Al Hunt: There’s 9,000 Years of Experience in Congress, Where Has That Gotten Us? 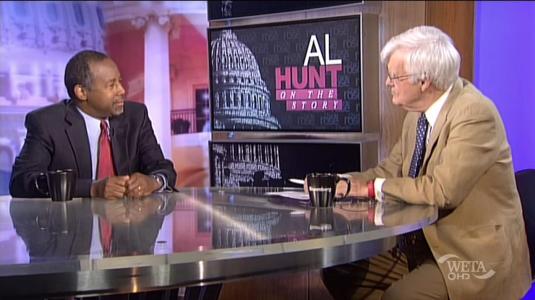 When Bloomberg reporter Al Hunt cited Dr. Ben Carson’s lack of political experience  as a possible weakness, on Monday’s Charlie Rose show, the GOP presidential candidate delivered a cutting comeback: “If you look at the collective political experience of everybody in Congress today, it comes out to just under 9,000 years and yet where has that really gotten us?”

In an interview aired on the August 3 edition of PBS’s Charlie Rose show, Hunt repeatedly pressed the Carson on the experience question as he asked “America, over the last century hasn’t elected any president who totally lacked political experience” and added “Would it be different if you wanted to hire a Baltimore Ravens coach who didn’t have any football background?”

The noted brain surgeon retorted that political experience does not automatically mean good governance: “There are a number of people who have been in politics for decades and yet you never see them coming up with any solutions for any of our problems.”

The following exchange was aired on the August 3 edition of PBS’s Charlie Rose show:

AL HUNT, BLOOMBERG NEWS: Dr. Benjamin Carson is one of the world’s preeminent pediatric neurosurgeons. At age 33, he became director of pediatric neurosurgery at Johns Hopkins. He has authored half a dozen bestselling books, one of which was made into a television program about his life.

Earlier this year he announced his candidacy for the Republican nomination for the President of the United States. One fact cited by critics and admirers alike, he has no political experience in political or public life. They disagree on whether that’s a credential or a liability.

We are pleased to welcome Dr. Benjamin Solomon Carson to this table. Thank you so much for being with us.

DR. BEN CARSON: Thank you. Delighted to be here.

HUNT: We know that you are a great surgeon. We personally know because you operated on our son. But let’s talk about your qualifications for president. America, over the last century hasn’t elected any president who totally lacked political experience. Why would Ben Carson be different and be good?

CARSON: Well, you know, if you look at the collective political experience of everybody in Congress today, it comes out to just under 9,000 years and yet where has that really gotten us? And you know, it’s possible actually to gain experience from a lot of different areas. This country rose from nowhere to the pinnacle of the world very quickly, and it wasn’t necessarily because we had a lot of experienced politicians.

CARSON: But my point, being that you can get experience from lots of different areas.

HUNT: Let me turn it around and ask it this way. If, if - would it be different if you wanted to hire a Baltimore Ravens coach who didn’t have any football background or take a really smart person with no medical background and say, you know we’re going to have you do brain surgery.

CARSON: Well, you know, people have asked me that before and I always say, it requires an enormous amount of knowledge, for instance, to become a neurosurgeon, not the kind of knowledge that you can acquire in a year or two years or three years or four years or even five years. That is not true of politics. A lot of people want to believe that it’s true. But it’s not true. And in fact there are a number of people who have been in politics for decades and yet you never see them coming up with any solutions for any of our problems.

HUNT: So freshness is an asset, you’re saying.

CARSON: I think what we really not are problem solvers who have the ability to surround themselves with people with political experience. You know, if you go in to Washington, D.C. right now and you open the lid on the engine, your immediate response is to shut it back down. It’s so complex and corrupt and intricate. But - And I don’t want to spend, you know, 15 years learning all the intricacies of that system. What I want to do is concentrate on the way it’s supposed to be. How does the constitution say it’s supposed to work? I can get plenty of people who know the intricacies of that engine.