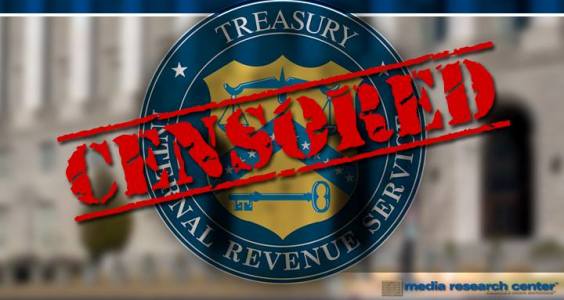 It was also reported that Lerner raked in “$129,300 in bonuses between 2010 and 2013,” and there are at least a half-dozen conservative applicants” still waiting for their tax exemptions.

But you wouldn’t know about any of these developments if you only got your news from the Big Three (ABC, CBS, NBC) networks or Spanish-language networks Univision and Telemundo.

So far, the network evening and morning shows have shoved these latest revelations to the side. In fact, ABC News hasn’t mentioned the IRS scandal story in almost 10 months. The last time the IRS targeting imbroglio got any airtime on ABC was a 16 second brief by Amy Robach on the May 8, 2014 edition of Good Morning America, when Robach reported that “six Democrats have joined Republicans in the House” to hold Lerner in contempt of Congress.

NBC wasn’t much better, the last time the IRS scandal was even mentioned came six months ago on the October 5 Today show, when NBC’s Meet the Press host Chuck Todd briefly noted that public skepticism about the government’s handling of the Ebola crisis was well-earned due to “Secret Service blunders, IRS losing e-mails, the Veteran Affairs Administration botching all these wait times.”

The most recent network mention arrived on the October 28 CBS This Morning when John Dickerson noted voters in states that would decide control of the Senate in the 2014 midterms were skeptical of the government due to a “series of different things from the Secret Service to Ebola to the IRS scandal.”

The following is a rundown of the most recent IRS scandal events the Big Three networks have refused to report:

On February 26, The Washington Times’ Stephen Dinan reported the following:

The IRS’s inspector general confirmed Thursday it is conducting a criminal investigation into how Lois G. Lerner’s emails disappeared, saying it took only two weeks for investigators to find hundreds of tapes the agency’s chief had told Congress were irretrievably destroyed.

Investigators have already scoured 744 backup tapes and gleaned 32,774 unique emails, but just two weeks ago they found an additional 424 tapes that could contain even more Lerner emails, Deputy Inspector General Timothy P. Camus told the House Oversight Committee in a rare late-night hearing meant to look into the status of the investigation.

On February 26, Politico’s Rachael Bade alerted her readers that there “at least a half-dozen conservative applicants” still waiting for their tax exemptions. In the article headlined “From IRS: ‘Death by Delay,’ Bade reported the following:

Nearly two years after the IRS was exposed for improperly sidetracking requests for tax exemptions from tea party groups, POLITICO has learned that at least a half-dozen conservative applicants are still waiting for an answer.

This challenges repeated assertions by IRS Commissioner John Koskinen that his embattled agency has “completed” a set of recommendations to fix the problem and address a backlog of nearly 300 applications, some of which had been pending already for three years.

The groups that are still waiting include Karl Rove’s giant Crossroads GPS, which spent at least $26 million against Democrats in the last election cycle. But most of the half dozen are mom-and-pop outfits from New Mexico to New Jersey, run by volunteers out of their own houses and operating at a fraction of Crossroads’ budget.

The years-long delay has gutted these groups’ membership, choked their ability to raise funds, forced them to reserve pots of money for possible back taxes and driven them into debt to pay legal bills.

These recent developments come on the heels of the news, as reported by the Washington Free Beacon’s CJ Ciaramella, that Lerner raked in “$129,300 in bonuses between 2010 and 2013.”