NBC's Meredith Vieira, on Thursday's Today show, invited on New York Republican Congressman Peter King and CAIR's Zead Ramadan to discuss the potential burning of Korans by Pastor Terry Jones and the furor over the Ground Zero mosque, but it was only King that was pressed by the Today anchor, as Vieira let Ramadan go unchallenged even when he equated opposition to the mosque to internment of  Japanese-Americans in World War II and even slavery.

First up, Vieira, after playing a clip of Feisal Abdul-Rauf, recited the Imam's concerns to King that if he moved the location of the mosque now it "would just be fueling the radicals" to which the New York Congressman shot back that "he seems to be equating the 71 percent of Americans who oppose this as being radicals." Then Vieira let CAIR's Ramadan go on, uninterrupted, as he proceeded to compare the protest surrounding the Ground Zero mosque to some of America's worst moments of intolerance as he went on to say: "The issue with the public sentiment is that when an issue is related to bigotry, unfortunately our history has shown that sometimes we're on the wrong side. For example we interred Japanese during World War II, we segregated our military, our schools, and it took on Executive Order to undo that. And we also enslaved our fellow Americans. So I mean when it comes to bigotry we've got to be careful about the public sentiment." [audio available here]

The following is the full segment as it was aired on the September 9 Today show:

MEREDITH VIEIRA: Let's get more on this now from Representative Peter King of New York who has been a vocal opponent of the plan to build an Islamic community center and mosque near Ground Zero, and Zead Ramadan, who is with the Council on American Islamic Relations. Gentlemen, good morning to you both.

[On screen headline: "Islam Under Fire, Are Muslims Being Treated Unfairly In America?"]

VIEIRA: Let's start with this notion, you know Pastor Jones, who's now said, who plans to burn the Koran on 9/11, on September 11th, on this Saturday-

VIEIRA: -that if somebody were to call from the White House or the State Department or the Pentagon, it is something that would not be ignored. So do you believe that someone from the White House, maybe even the President himself, should call this man and encourage him not to burn the Koran? I'll start with you?

VIEIRA: Do you think a call should be placed?

RAMADAN: I think if General Petraeus was to say, "Look we think that American lives would be at stake here, that you're gonna flick on the switch for radicals and extremists to act," I'd rather save American lives. That would be my perspective. Even though he did say a couple of weeks ago that the person he respected was George Bush, and they asked him if George Bush called would you stop, he said no. But I really hope that if he had a change of heart that we would do something about that and-

VIEIRA: What do you think is going to happen, if he does go ahead with this?

RAMADAN: Well, you know, you never know what triggers psychotics. And I'd hate to think that people are turned on, you know, just like that flick the switch analogy and someone becomes an extremist and they go from rhetoric to action. And that would concern me in America, and outside of America. You know I, we don't want anybody else threatening American lives. And I think that's what's most important to us.

VIEIRA: But, but since this whole controversy erupted we have seen the American flag burned by Muslims around the world, we've heard people scream "Death to America," but no one, or I would say most people do not believe that all Muslims hate the U.S. or wish it harm. So why is so much weight and legitimacy given to this pastor and his relatively small congregation? We're talking maybe 50 members.

KING: I think it's a sign of the times. If a person speaks loudly enough and says something crazy enough the media is gonna cover it and people are gonna respond. I think we all do ourselves a favor if we could somehow ignore him. It adds, not only adds nothing to the debate, it brings the debate down and brings it to a level where no one wants to be at. It's wrong...

VIEIRA: Should the media not cover it, which is what the Secretary of State has suggested?

RAMADAN: I think so, personally. I think that you're giving him a forum and I think that if people never listened to him, he might think that this is not something that's worth his while at the end of the day. You know an organization called Right Wing Extreme said they initially planned to protect him while he does this. And they said that after a lot of praying and thinking they just didn't realize how this would bring people closer to Jesus. Some people are saying - so they backed down last week. And maybe this a little bit too right wing and too extreme for them.

VIEIRA: Let's talk about the controversy surrounding the construction of this Islamic cultural center near Ground Zero. Last night on CNN, the man behind that proposal Imam Feisal Abdul-Rauf said that had he realized how much controversy this was gonna cause he n 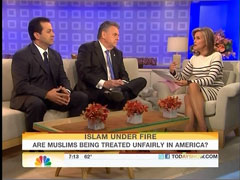 ever would have decided to build it there, but at this point he has a responsibility. Listen to what he told CNN.

FEISAL ABDUL-RAUF: If we move from that location, the story will be that the radicals have taken over the discourse.

VIEIRA: I know Congressman that you're opposed to that mosque being put there.

VIEIRA: But is he right, that he would just be fueling the radicals if he moved that cultural center, at this point?

KING: Well my problem with what he's saying, he seems to be equating the 71 percent of Americans who oppose this as being radicals. He's talking about the radicals who are opposed to the mosque which, to me is 71 percent of the American people and comparing that to al Qaeda or radical elements in the Muslim community. And that, to me, is a, it's a totally wrong equation. And it's, to me, that is - he is almost - to me it's like a threat to the United States. What he's saying is that if somehow this mosque is not approved, that the radical elements of the Muslim world are going to be against us. I don't think we have to prove ourselves to anyone. I mean Muslims in this country as well as Catholics and Jews and Protestants are treated better here than anywhere else in the world. And I would say Muslims probably have more freedom in this country than any of their own countries.

RAMADAN: Yeah the, the issue with the public sentiment is that when an issue is related to bigotry, unfortunately our history has shown that sometimes we're on the wrong side. For example we interred Japanese during World War II, we segregated our military, our schools, and it took on Executive Order to undo that. And we also enslaved our fellow Americans. So I mean when it comes to bigotry we've got to be careful about the public sentiment. What's really important is that our public officials and our, and our congressmen have to come out and tell people, this is not what, this is not what America represents, these are not the ideals that our nation was founded on and we have to be better than that.

KING: Yeah but what I disagree with there, is why do we say, what am I saying, as a Congressman, that in any way violates American ideals? I have raised real questions about the Muslim leadership in this country. For instance, I don't think the Muslim leadership speaks out enough against terrorism. I can tell you that there are mosques in this country where imams tell their congregants not to cooperate with the, with law enforcement. And if you talk to law enforcement people they will tell you that very seldom, do they get cooperation from the Muslim leadership. And that to me is the real issue.

VIEIRA: But the imam might, but the imam might say to you, as he said on CNN last night, this story broke last December, the front page of the New York Times. Nobody complained about it then. It wasn't until about two months ago. He thinks that it's politicians who've grabbed onto it for political reasons. Even the mayor himself said, come November 3rd this won't be an issue anymore.

KING: I disagree with that completely.

RAMADAN: This is, it is the midterm, it is the midterm elections and people like Newt Gingrich who've equated Islam to, you know Nazism. I mean we need to condemn people like that and say this, these are, these, you know these sentiments are absolutely wrong. And if you don't think that people are listening to Newt Gingrich or Sarah Palin or Rick Lazio who hasn't talked about anything else and he's running for the governorship of New York state, you know except for the mosque. You know he's basically driving all attention and driving the public sentiment against the development of a religious institution which is protected by our Constitution.

VIEIRA: You have about 15 seconds left...

KING: Okay, okay no one says that there is not an absolute right to build a mosque, but because you have the right doesn't make it right. And I think it's a very legitimate issue to talk about this mosque to be barely 500 feet from Ground zero, to have a 13 story, $100 million edifice where 3,000 Americans were killed that day, it's wrong. And I think it's wrong to say that it's somehow un-American to raise that as an issue because-

VIEIRA: This is, you know gentlemen-

VIEIRA: -this is a discussion that's gonna go on for quite awhile.

RAMADAN: ...blame it on Christianity. You know?

KING: -is a totally unfair comparison. The fact is-

RAMADAN: Why is it unfair?

KING: Because the Muslim leadership in this country does not cooperate with law enforcement...

KING: I'm concerned with imams, I'm talking about imams in mosques which are being investigated.

VIEIRA: This is why, this is, gentlemen-

VIEIRA: -I'm gonna have to cut it off there. I understand but, but my point is-

VIEIRA: -this is because, this is why this is such a controversy because it is so heated, on both sides and it's not gonna end today or tomorrow. I'm have to stop it there. Thank you so much, Congressman King.

RAMADAN: Thank you very much.

KING: You're a peacemaker.