NBC's chief White House correspondent Chuck Todd, in an interview with the President that was aired on Friday's Today show, actually questioned Barack Obama about his controversial recess appointment of the pro-health care rationing Dr. Donald Berwick to head Medicare, something, as Newsbusters has documented the networks have vastly ignored. However, Todd never explained to viewers why the President's opponents were upset by the appointment, and instead gave him an excuse to say the move was just his way of getting around a failed political system as he asked the following:

Do you think Washington is broken? And the reason I ask you this, because when you appointed - you did the recess appointment of Donald Berwick. You seemed to send the message of one of two things. Either you didn't want to debate about health care again on Capitol Hill, which got a little raucous a year ago or you know what? "The Senate process is broken and we gotta go around it?" [audio available here]

When the President responded that he couldn't afford to "Play political games with the Senate," something he himself did by using the recess appointment, Todd didn't call him on it, choosing instead to ask, once again, if Washington was "broken?" Todd also could've highlighted the President's personal hypocrisy on this issue -- a point even the liberal Washington Post columnist Ruth Marcus caught -- as in 2005, when George W. Bush recess appointed John Bolton to UN ambassador, a then Senator Obama claimed: "To some degree, he's damaged goods."

The following is the full interview as it was aired on the July 16 Today show:

MEREDITH VIEIRA: The situation in the Gulf is not the only thing on President Obama's mind. The economy is still lagging. November's midterm elections are fast approaching and his facing, he is facing falling poll numbers. NBC's chief White House correspondent Chuck Todd sat down with President Obama on Thursday. Chuck, good morning.

[On screen headline: "Obama One-On-One, Can President Bring More Jobs Back To Economy?"]

CHUCK TODD: Good morning, Meredith. Well, as you know, the President has had a hard time convincing the public that his economic policies, including that trillion dollar stimulus plan, has been working. He's been making almost weekly trips to the heartland to try to promote it. Yesterday it was the groundbreaking for a car battery plant. That said, he acknowledged that the economy still has a long way to go.

BARACK OBAMA: The main thing that keeps me up at night right now is we lost eight million jobs. The month I was sworn in, we lost 750,000 jobs. We've regained about 600,000 this year so far, and if we stay on pace, hopefully we'll gain several 100,000 more, but making up for that eight million is going to be a challenge. Look nobody in the White House is satisfied with where we are right now. What we absolutely are convinced of, though, is that we're on the right track and I think that the statistics bear that out.

TODD: What do you tell, tell the person [who] may have voted for you-

TODD: -can't find a job or got laid off since you took office, why they should still keep the Democrats in charge?

OBAMA: If somebody is out of work right now, the only answer that I'm gonna have for them is when they get a job. Up until that point, from their perspective, the economic policies aren't working.

OBAMA: That's my job as, as president, is, is to take responsibility for moving us in the right direction.

TODD: You talk about a choice election this fall, are you prepared for the fact that now that means your policies, it's a referendum on you, and your policy, and that the voters may say, "You know what, we're putting the Republicans in charge."

TODD: Do you think Washington is broken? And the reason I ask you this, because when you appointed - you did the recess appointment of Donald Berwick. You 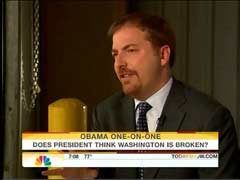 seemed to send the message of one of two things. Either you didn't want to debate about health care again on Capitol Hill, which got a little raucous a year ago or you know what? "The Senate process is broken and we gotta go around it?"

OBAMA: You know the fact of the matter is, is that I can't play political games with the Senate on these issues. I've got a government to run. And at a certain point we have to go ahead and just make sure that people are in place to deal with the enormous challenges that are ahead.

TODD: So you're not ready to say Washington is broken?

OBAMA: Well, here, here's what I'm ready to say, that Washington has spent an inordinate amount of time on politics. Who's up, who's down? And not enough on how are we delivering for the American people? The good news is that despite no cooperation from the other side, we have over the last two years stopped an economic freefall, stabilized a financial sector. When people are determined and are willing to take tough votes, even when it's politically inconvenient we can still get things done.

[On screen headline: "Obama One-One-One, Will President Go On Vacation In The Gulf?"]

TODD: I gotta leave it there but vacation in the Gulf? I know the First Lady was down there, touting it, in Panama City, Florida. Are we gonna see you guys down there?

OBAMA: You know we're gonna be trying to figure out, where we're gonna be able to take some time over the course of the summer. But a month of it is gonna be taken up with Malia going away for camp, which she's never done before.

OBAMA: And I may shed a tear when she's on the way out.

TODD: Well, the President did comment on one foreign policy challenge and that is this al Qaeda franchise that's in Yemen. He was not ready to say that the U.S. would have to take more military action down there. They have been doing some co-op cooperative attacks with the government of Yemen. But he did describe the place as being very similar to Afghanistan. And of course, Meredith, that's not exactly the best comparison.

VIEIRA: Not at all. Chuck Todd, thank you very much.