Matthews: Every 'Teabagger' is White, 'What's That About?'

Chris Matthews just can't stop implying some sort of racist motives behind tea-partiers as on Tuesday's Hardball, the MSNBC host – in a segment about which candidate they would gravitate towards – asked his guests why the protestors were all "monochromatic," and to add insult to injury repeatedly called them "teabaggers." [audio available here]

The following exchanges were aired on the January 5 edition of Hardball:

CHRIS MATTHEWS: So who will lead the tea-baggers? Will it be Rick Perry down in Texas? Will it be Michele Bachman out in Minnesota? Will it be Sarah Palin? You first Mark [McKinnon] it's your idea. The tea-baggers are an interesting group to watch. They're not far right. They're probably center-right, in fact some centrists. But they're generally, I think, Republican voters. Right? Is that fair to say? They vote Republican?

MATTHEWS: And they're monochromatic right?

MARK MCKINNON, THE DAILY BEAST: Well I don't know that they're monochromatic?

MATTHEWS: They're not? Every picture I see shows them to be.

MCKINNON: Well there's a lot of people out there that cuts acr 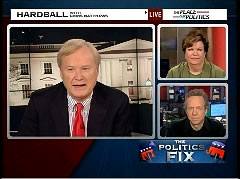 oss a lot of demographics who feel disenfranchised.

MATTHEWS: But not that other demographic.

MCKINNON: The other demographic?

MATTHEWS: Meaning they're all white. All of them, every single one of them is white.

MATTHEWS: Yeah well what's that  about?