Salon.com Editor-in-Chief Joan Walsh, on Wednesday night's "Hardball," cited "conservatives" like Rush Limbaugh, Michelle Malkin and Bill O’Reilly for "whipping up" a climate that sparks the likes of alleged Holocaust Museum shooter James Von Brunn and "Hardball" host Chris Matthews wondered if access to guns were to blame for the tragedy as he cried, "It's easier to get your hands on a gun than to get somebody to make you a waffle." Blaming Limbaugh while insisting she was not, Walsh charged:

There is a very disturbing and disturbed element of political discourse. And I would, I would throw in Rush Limbaugh. Not blaming him, but when you say that our President is more dangerous than al-Qaeda you've gone off into crazy nut job land. You are off the charts crazy. And you are, you are whipping people up.

After her appearance from San Francisco, Walsh posted a blog item titled: "Can right-wing hate talk lead to murder?"

The following exchanges aired toward the end of the June 10 edition of MSNBC's "Hardball":

CHRIS MATTHEWS: Joan Walsh this is a political action today by a far right extremist. I just wonder what's in the water, what's in the air as we speak?

JOAN WALSH, SALON: Well I wonder too, especially in the wake of the murder of Dr. George Tiller who performed abortions, another, another really unhinged right wing nut job. And, and I want to be very careful here Chris. The only people responsible are the people who pulled the triggers. Unless we find out that these guys had help, that may be a different story. But from what we know now the people responsible are the killers. However I don't think you can deny that there is a rising climate of right wing hate, a lot of it directed at Obama. You and I go way back to the beginning of the campaign and the level of craziness. He's a secret Muslim. He hates America. He wasn't born here. Now this guy, Von Brunn, he's, he, he was one of the birthers. He didn't believe in Obama's birth certificate and he was constantly online agitating about that. There is a very disturbing and disturbed element of political discourse. And I would, I would throw in Rush Limbaugh. Not blaming him, but when you say that our President is more dangerous than al-Qaeda you've gone off into crazy nut job land. You are off the charts crazy. And you are, you are whipping people up. If he's worse than our mortal enemy -- al-Qaeda who killed thousands and thousands of Americans – I don't know where do you go after that? It's awful.

WALSH: Chris can I make a point- 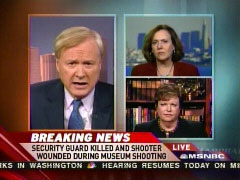 WALSH: -about the DHS report too, that I think is relevant. Susan [Page] hits the high points. It also says that, you know, the single biggest danger, in their view, are lone wolves and that looks prescient today too. But what, if you look back at the way Janet Napolitano, who didn't even write it, it was commissioned by the Bush, by the Bush White House, if you look back at the way she was vilified, at Rush Limbaugh, and Michelle Malkin and that whole right wing echo chamber acting as though it was now open season on conservatives, they have this incredible capacity-

WALSH: -to be shrill, to polarize. And I don't know what happened to that report? It got shelved until today. Susan and I read it. You know I hadn't read it, when it came out. It's very calm.

MATTHEWS: Well let me ask you Sue, we live in a country where it's easier to get your hands on a gun than to get somebody to make you a waffle. It's easy! It is totally easy in this country. We believe in the First Amendment. Our Constitution is protected. The right to bear arms is an individual right, as recently reviewed by the Supreme Court. It's a fact of life. You put together the, the prevalence of guns in this country. The easiness with which someone can engage in gunplay and gun smoke, in this case, where people can be killed it doesn't surprise me. I wonder whether if in a free society violence is always gonna be part of it, if guns are available and people are allowed to walk into places like the Holocaust Museum?

A little later in the program Matthews questioned if "conservatives" needed to change their "tone," to which USA Today's Susan Page more reasonably offered it wasn't fair "to conflate being a conservative with fringe groups." For her part Walsh tried to walk back her position, as she said she didn't blame "conservatives" or "mainstream Republicans" for the shooting but nevertheless continued to link their "rhetoric," to the tragedy.

MATTHEWS: Susan you first. You know we've grown up in a country where there's been an extreme, generally on the right, sometimes on the left. Lee Harvey Oswald clearly was fascinated and in love with, infatuated with, with Fidel Castro when he killed Kennedy. This thing here where you have a person who claims to be or is actually anti-Semitic, anti-black, anti-Catholic, I guess on the periphery, which is the big three of the KKK historically. What do we do with this? Are we gonna hear from conservatives who are gonna start saying, "Well let's stop some of this black helicopter talk. Let's stop this villainization of the government, of the establishment." Which way do you think the tone of the debate is gonna go now?

SUSAN PAGE, USA TODAY: Well I don't think it's really fair to conflate being a conservative with these fringe groups that engage in this, in this kind of violence. I mean that's, you can be a critic of the Obama administration without endorsing these, these kind of views and certainly these, these actions. But I do, yeah I do think this sparks a kind of debate and concern about, about what's happening with politics.

WALSH: And I will say, you know, I do hope that some conservatives do stand up. I don't blame them, I don't blame mainstream Republicans by any means for this. I want to be clear. But they could help in ratcheting down some of the rhetoric. When Bill O'Reilly goes on TV every night and calls Dr. Tiller a baby-killer and a Nazi and a Mengele and shows where he works I, why do we put up with that? Why is that entertainment in our culture? Demonizing a private citizen for doing a lawful job. Why, why, why, why are people doing that? Why is that acceptable? I would like to see a debate about that.

Incidentally, while Walsh slammed O'Reilly for "demonizing a private citizen," it was Matthews -- earlier on Wednesday night's show during a segment on the future of the GOP -- who actually compared former House Speaker Newt Gingrich to the Devil:

MATTHEWS: Doug it's not too cartoonish to describe Rush Limbaugh as sort of a walrus under water. That’s what he talks like. Whu, whu, whu. He's like a drowning walrus the way he talks. And then you've got Newt Gingrich who's clearly a, well he looks like a Mephistopheles. And then this guy, well, well Cheney is a troll. So you got a troll, a walrus and the Devil as your cartoon characters. Can't you guys find more attractive figures that the right might rally too?