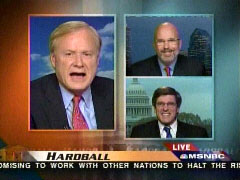 On Monday night's "Hardball," the Wall Street Journal's Stephen Moore challenged Chris Matthews to come out to one of the many tea parties protesting taxes and the government bailouts, as the former Club For Growth President egged on the "Hardball," host to prove he is "a man of the people," but Matthews ducked the invitation and yelled back: "Steve stay in your box!"

As Matthews was wrapping up a segment with Moore and radio talk show host Michael Smerconish, Moore got in the following parting shot:

STEPHEN MOORE, WALL STREET JOURNAL: Chris! Chris! Chris! My question is you're a man of the people, why aren't you out there at these April 15th rallies? I mean c'mon! You know you, you say, you speak for the middle-class guys?

CHRIS MATTHEWS: What is this? Intramurals? Michael Smerconish, thank you and Steve stay in your box!

Perhaps Moore was just getting back at Matthews for making fun of him earlier in the segment when after Moore noted he was a fan of Rush Limbaugh, Sean Hannity and Newt Gingrich, Matthews taunted: "You love them?!" Matthews also ridiculed Fox News for its coverage of the tea parties as he mocked: "Oh God! You know I gotta believe that Roger Ailes has the biggest tongue-in-his-cheek when he does these ads. 'We report. You decide.' I mean what, 'balanced coverage' of an anti-government rally?"

The following exchange was aired on the April 13 edition of "Hardball":

STEPHEN MOORE, WALL STREET JOURNAL: And these are middle-class folks. These are not people who are rich in three-piece suits. And the thing I would say about this is, I really think it is not partisan. I really believe, Chris, if Republicans were doing the policies the Democrats were doing, and this, you're right, this started under George Bush. No question about it. That people are just angry that Washington isn't listening to the little guy.

MOORE: No those, those are my friends!

MOORE: Those are my friends, Chris!

MATTHEWS: Speak for the Journal sir!

MOORE: No but look I mean I think that, I love, love Sean Hannity. I love those guys. I love Newt Gingrich. But this did not start-

MATTHEWS: You love them?!

MOORE: -with them. It really did start in towns across America.

MATTHEWS: Okay. You love them?! Well let's watch Fox because I think they love themselves more than you love them. Here we go.

ANNOUNCER: April 15th, all across the country Americans are making their voices heard. In California, Texas, Georgia, Washington D.C. citizens are standing up, saying no to more taxes and demanding real economic solutions. April 15th, as tea parties sweep the nation on Tax Day we're there with total fair and balanced network coverage. Live! What is the fate of nation? We report. You decide.

MATTHEWS: Oh God! You know I gotta believe that Roger Ailes has the biggest tongue-in-his-cheek when he does these ads. "We report. You decide." I mean what, "balanced coverage" of an anti-government rally? An anti-tax-, a balanced coverage of that. It's so amazing!