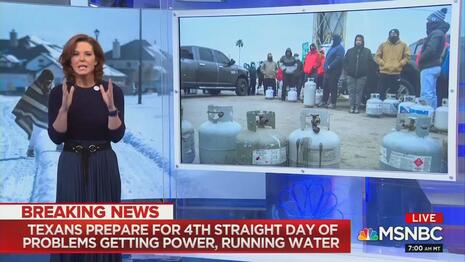 During her opening, Ruhle — who is known for being a Democratic sympathizer — decried Republican elected officials for “spending their time getting political” and not doing more to help residents of Texas. However, less than ten minutes later (09:09 a.m.), Ruhle and her guest, liberal pundit Matthew Dowd, unequivocally politicized the wintery catastrophe by wholly blaming it on climate-denying conservatives.

Dowd, a former strategist for the Bush-Cheney 2004 presidential campaign turned left-wing media commentator, began by delineating Republican leadership as a “complete failure.” Of course neither Ruhle nor Dowd mentioned the fact that the temperatures and snowfall in Texas are nearly unprecedented; instead, they fervently used the right as a scapegoat.

Ruhle slammed Texas’ Republican Governor Gregg Abbott for appearing on Fox News Channel and other networks to inform the nation of the crisis his constituents were facing and emphatically warn Americans of the various shortcomings of green energy — specifically wind turbines. Clearly missing his point, the left-wing host dismissed Abbott’s concerns as nonsense, since federal environmental legislation “hasn’t even been passed”: “Governor Abbott has been spending time this week on cable news blaming this crisis on the Green New Deal, which makes absolutely no sense, the Green New Deal hasn't even been passed federally, certainly not in Texas. So that's a lie.”

When asked if he thought residents of Texas were getting enough support from their lawmakers, Dowd callously answered, “The real bottom-line answer is no.” Dowd failed to provide lawmakers — who may have been listening — any suggestions on what they can do to better serve their communities. Instead, Dowd lambasted the use of fossil fuels and claimed that the governor and lieutenant governor of Texas refused to accept responsibility for the unforeseen harsh winter conditions.

Dowd urged listeners that they “should never forget” the politicians who “lied” to them. Does that sound like unity?

Stephanie Ruhle’s hypocritical politicization of the winter storm that has affected millions of people in Texas was brought to you, in part, by Tylenol. You can contact this advertiser, and others, via the Conservatives Fight Back page, conveniently linked here.

STEPHANIE RUHLE: Hi there, I'm Stephanie Ruhle, live at MSNBC headquarters here in New York City. It is Thursday, February 18th, let's get smarter. Millions of Americans are waking up to freezing temperatures, today, as the massive winter storm that crushed the south is now moving toward the east coast. But, right now, no place is worse off than the state of Texas, where hundreds of thousands of people are still without power for a fourth straight day. It has been a slow-motion disaster that started when a winter storm overwhelmed the power grid and people running it. As we speak there are still more than 500,000 homes and businesses without electricity, heat, in some cases even water. There has been at least 21 weather related deaths in Texas alone—that we know of. Residents there are furious. They just want their lights on and their heat. But even as some officials are trying to make that happen, other leaders are spending their time getting political, trying to place blame and turning this human crisis into some sort of nonsense political debate.

RUHLE: I want to bring in Matthew Dowd, chief strategist for the Bush-Cheney 2004 presidential campaign and founder of Country Over Party. He joins me, now, on the phone from Texas. Uh, Matthew, you are a transplant Texan, but you’re also a man who understands politics. How has this human crisis become political? You’re talking to me from a hotel room because you had to leave your house.

MATTHEW DOWD:  Well, thank you, Stephanie. As I've said, I feel better than most. We've lost power three or four times at the hotel, since I've been here. I'm going to try to venture back home and assess the pipe damage—of frozen pipes at my house. We're starting to have more intermittent power, so that's a good sign. But it's been a complete failure of this leadership of the state. It's – it ties back to a lack of investment in infrastructure. I would ask people, we can do two things simultaneously, Stephanie. We can get people the help they need, which they desperately need, here. So, I would just your people watching or listening, to look for all the charities that are working, looking at Beto O'Rourke's Twitter feed, who has a number of suggestions of what people can do, but we can also assign responsibility in the midst of this and we are at another point where politicians who mislead the public, who lie to the public, put us in a dangerous situation. We saw it in Flint where that happened, we saw it in the COVID situation where the President misled the public. We saw it in the election cycle. Which led to an insurrection and now we're seeing it in Texas with the governor and the former governor misleading the country and misleading Texans, so it's a dire situation. People are trying to help each other out, without much leadership from the state but that's where we are today.

RUHLE: You said that people in Texas need to remember this incident so in the future they choose leaders with integrity who won't lie to them. Why do you feel the need to say that right now?

DOWD: Well, I feel the need to say that, right now, because we have such short-term memories and we watch things happen and we've watched it all happen. I feel like 2020 didn't end in regulation. We're now in overtime of what all happened in 2020 with what we're experiencing this year. We should not forget. And I thought about this morning when I woke up, this morning, today is the day that Jimmy Lee Jackson was shot in Alabama because he was a vet, and because he was objecting to voting rights, or he was looking for voting rights, he was shot today, died eight days later but on this day in 1965. The people in the civil rights movement did not forget and pushed and pushed and pushed until they finally had some sense of justice and people understood the truth. We need to do that today. I know the election cycle, and I know the legislative sessions are far off, but we cannot forget these things that happened and the lack of truth and the lack of responsibility and the lack of accountability by our leaders. The only way we can fundamentally hold our leaders accountable and demand leaders of integrity is in elections. It's the only way in our Republic that we can do that and the only way we do that is if we don't forget when people lost their integrity and weren't leading in a state or in a country. We cannot forget.

RUHLE: Governor Abbott has been spending time this week on cable news blaming this crisis on the Green New Deal, which makes absolutely no sense, the Green New Deal hasn't even been passed federally, certainly not in Texas. So that's a lie. But what's he doing on the ground? You're in a safe hotel. What's happening to people outside? Are they getting the support from lawmakers that they need?

DOWD: The real bottom-line answer is no. The governor has put out various statements and done various things. I think what he did when he was on Fox News was outrageous. I tweeted this out earlier. It's akin to a restaurant owner who, after all his customers suffer food poisoning, blames the problem on, because the menus were printed on recycled paper. That's the same thing when he blames this on the Green New Deal. It’s nothing to do with the problem. In fact, the fossil fuels industry, which has brought us to this climate change problem, which is why we're having winter storm events and storm events around the country from wildfires, they brought us the problem and, right now, they are the problem, and why we're not having enough energy in people's households. I think the governor is trying to find everybody else other than himself to hold accountable, when she should be holding himself accountable. I don't understand why leaders don't say, listen, I messed up, we should have planned this better. Here's what I'm going to do in the future and I think most Texans would think, okay, mistakes were made, you're going to fix this situation, but when you don't point the finger at yourself and point it at everybody else it doesn't solve the problem.

RUHLE: No it doesn’t. Matthew, thank you for joining me. Stay safe where you are.