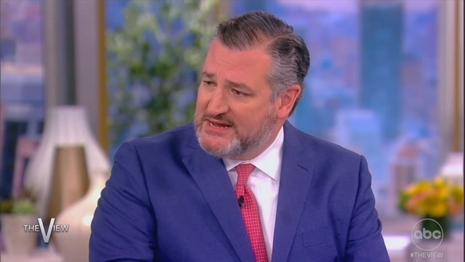 On Tuesday night, Houston, Texas-area media reported a large first-responder presence at the home of Senator Ted Cruz (R-TX) and that, as per ABC-13, “officers responded to reports of a 14-year-old with self-inflicted stab wounds” after which Cruz’s oldest daughter was taken to the hospital. But instead of abiding by unwritten rules to leave the underage children with famous parents alone, some in the liberal media exploited it because of their virulent hatred for the Senator.

The smears stemmed from a January TikTok video in which Caroline Cruz allegedly came out as bisexual and voiced disagreement with her famous father’s politics. In turn, the liberal media used what should be a private matter and blamed him for the incident.

Cross-posted at Yahoo! News, LGBTQ blog The Advocate had a tasteless piece in “Ted Cruz’s Bi Daughter OK After Rushed to Hospital, Rep Says.” Not only did they mention Cruz’s daughter’s personal life, but the bottom of the piece included contact information for a transgender lifeline.

Queerty, another LGBTQ blog, used Meghan McCain’s tweet sending well-wishes to trash her, griping in the headline: “Of course Meghan McCain has found a way to make the situation with Ted Cruz’s daughter about herself.”

In a since-deleted post on both sites, the blog wrote that “[s]ocial media users” have wondered if “Cruz’s hate campaign...drove his daughter to become suicidal.”

The piece continued, saying the teen having an “outwardly homophobic father paint a concerning picture” and that a “lack of parental acceptance increases the likelihood of suicidal thoughts and depression in LGBT youth” (click “expand”):

Though reports do not identify Cruz’s daughter, Twitter users have assumed it is Caroline, the eldest of his two daughters. Earlier this year, the teen came out as bi-sexual on her now-private TikTok account, per the Advocate. Certainly, the juxtaposition between a queer daughter and outwardly homophobic father paint a concerning picture. Many social media users poured out their hearts to Cruz’s daughter while also offering support where they believe Ted’s was absent.

Multiple factors contribute to these frightening statistics including the internalization of anti-LGBT rhetoric. Particularly, in our current climate, the lack of parental acceptance increases the likelihood of suicidal thoughts and depression in LGBT youth. Rejection is a serious attack on their mental health. If we were to examine Ted Cruz’s initiatives against the LGBT community (including condemning same-sex marriage, standing against the Equality Act, the list goes on), it’s not a far-off assumption that he may not create the warmest environment for a queer teenager. We don’t know or may never know what Cruz’s daughter was struggling with mentally. At the end of the day, she’s a human being in a stage of life where she needs love and support the most.

While local media largely behaved, the Beaufort Enterprise hurled slime by invoking the January TikTok video and griping that the girl’s father “has been no stranger to public disdain amidst his political views on opposing gay marriage and the cancel culture or ‘woke’ culture as the right-wing created term has evolved”.

The only establishment outlet to make a scene was the New York Daily News, which emphasized the fact that the senator’s wife Heidi had a scary incident of her own back in 2006.

The trashy tabloids weren’t to be left out. Jezebel was on board, writing: “Cruz’s family and young daughter received significant attention over reports that she had come out as bixsexual on her now-private TikTok and talked about struggling with her father’s fame and his conservative views in her videos.”

The Wrap was also on scene with this personal information before noting the family was “met with across-the-aisle support and concern.”

OK! Magazine, Radar Online, and The Sun devoted significant space to the TikTok video from Cruz’s daughter so as to leave the implication that her father’s views brought about Tuesday’s incident.

Over at Washington Press, Stephanie Bazzle had the gall to write, “PRIVACY REQUEST: How should the media cover the self harm inflicted by Ted Cruz’s daughter?”

“Cruz’s state is one of several that has made legislative moves over the past few years to make life harder for LGBTQ children, and Cruz himself has made public statements in recent months about opposing protections for same-sex marriage,” she added, suggesting Cruz was to blame because “some of the biggest factors in reducing risks and helping LGBTQ children survive” is “having trusting and accepting adults.”

By Thursday, the Daily News actually reported on a TikTok video from Cruz’s daughter in which she said “the media” have “caus[ed] my mental health to be exploited for their gain” and “I also don’t enjoy the assumptions on why I did what I did” seeing as how “it had nothing to do with my sexuality or my father.”

She added that while she’s “not suicidal,” she’s “experiencing some mental issues” with “the most traumatizing part” having been “how public it’s been.”

It would behoove these outlets to consider one-upping the Deseret News, which reported the personal details on Cruz’s daughter in its initial version:

[A]s Jezebel noted, Cruz and his daughter have been in the spotlight before, earlier this year, when she came out as bisexual on her then-public TikTok account. She used the platform to talk about her hard relationship with her father’s fame and conservative viewpoint. 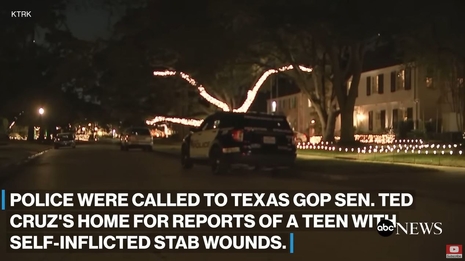 But after heavy public backlash that included Senator Mike Lee (R-UT), Real Clear Politics Editor Carl Cannon, and MRC Founder and President Brent Bozell to name a few, they stealth-edited the story to remove the paragraph in question.

A whole host of news outlets had stories with the bare bones details, including ABCNews.com, The Daily Beast, the Daily Mail, Mediaite, MSN.com, Newsweek, and the New York Post.

On the television side, NewsNation was the lone network to mention it with host Chris Cuomo wishing the Cruz family the best wishes and asking the masses to respect their privacy.

Shockingly, the major broadcast networks and liberal cable channels left this story alone with ABC, CBS, CNN, MSNBC, NBC, and PBS having yet to mention the incident. Same went for the top liberal papers in The New York Times, The Washington Post, and USA Today.

Houston’s NPR affiliate and liberal rag The Houston Chronicle had short items on the incident, but they successfully kept politics out of their write-ups.

Incredibly, these liberal activists did something right for once.