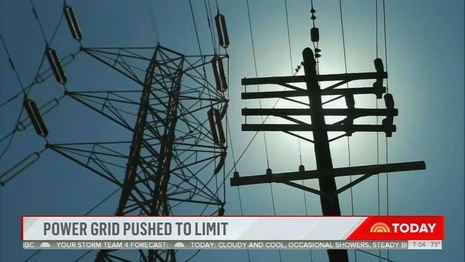 On Wednesday morning, the broadcast network news shows were hit by a sense of doom as ABC’s Good Morning America, CBS Mornings, and NBC’s Today led with the threat of self-imposed blackouts in California due to the far-left state’s fragile and inept power grid due to extreme heat.

Of course, the blackout threat hit amid calls from Governor Gavin Newsom (D-CA) and his regime to force Californians to buy electric cars, keep thermostats near 80, and move to so-called renewable energy sources. Naturally, none of those concerns were aired.

Instead, like most negative headlines for President Biden, they’re merely reported as having happened to Newsom and his ultra-left base when, in reality, it’s been happening for decades. And, as our friends at the Daily Wire noted, California Democratic Congressman Eric Swalwell mocked Texas when their power grid failed in a winter storm.

Correspondent Will Carr said that, along with wildfires, Californians are facing “the potential for rolling blackouts” as state “officials sound the alarm.”

Carr added that “[t]he brutal temperatures surging electric demand leading to growing fears of power outages, California seeing its highest demand ever on the power grid” with the Golden State’s “independent system operator issuing an emergency alert urging residents to conserve energy and it looks like those conservation efforts worked.”

On CBS Mornings, co-host and Democratic donor Gayle King opened the show “with what could be — could be a crisis in the making in California where scorching heat” is “pushing the power grid all the way to the limits.”

“Record temperatures mean record demand for electricity. No surprise there. And that's forced officials to issue an alert. Blackouts could be on the way,” she added.

NEWSOM: We're heading to the worst part of the heat wave, and the risk for outages is real and it’s immediate.

EVANS: At one point Tuesday, the state's power grid was pushed to the limit with demand soaring to a record of more than 52,000 megawatts. California's maximum is 56,000 megawatts. According to an expert we spoke with, California just doesn't have enough alternative energy like solar or wind resources to cover the increased demand, and the state's drought is impacting the power supply, as well.

STANFORD UNIVERSITY’s FRANK WOLAK: The reservoirs being as low as they are, we hit historical lows, means you just can't run as much water through the dams as you would like to.

EVANS: With no letup in the heat, wildfires are causing death and destruction across the state.

Senior national correspondent Miguel Almaguer fretted that “the strain on the power grid” and the possibility of blackouts (like those seen “briefly” in “parts of Silicon Valley”) were the latest proof that “California can’t seem to catch a break.”

“If blackouts are ordered, cities lose power. That means no AC as sweltering temperatures hover in the triple digits. Nearly all of California and much of the west dealing with historic heat...Those smaller blackouts in smaller cities overnight only lasted for about an hour, but today will be another major test,” he added.

The story even received attention on the 3rd Hour of Today with co-host Dylan Dreyer calling it “relentless” with record highs triggering concern “the power grid won't be able to hold up.”

Back in 2001, PBS’s Frontline covered “The California Crisis” and explained in a article that, “[b]y the early 1990s, electricity rates in California were on average 50 percent higher than the rest of the U.S” with efforts in the decade prior having had little success.

National Geographic’s Resource Library explained in a piece that the state has suffered major rolling blackouts in 2000, 2001, 2005, and 2011. California also suffered them in August 2020 as a way to thwart the spread of wildfires as they continue to move towards a heavier reliance on so-called green energy sources.

Wednesday’s dispassionate reporting about ultra-left California was made possible thanks to advertisers such as Ancestry (on ABC), Citi (on NBC), and Subway (on CBS). Follow the links to see their contact information at the MRC’s Conservatives Fight Back page.