With CBS Mornings trashing former Japanese Prime Minister Shinzo Abe as “a polarizing figure” and “nationalist” with “controversial” views just hours after being assassinated, ABC’s Good Morning America and NBC’s Today were more conciliatory on Friday, remembering him as a “giant” and “popular leader.” However, they sought to tie his killing to mass shootings in the U.S. and argue Abe was the victim of “gun violence.” 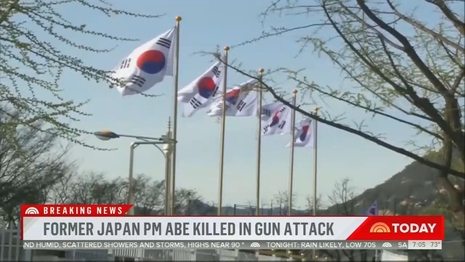 And in the case of Today, they also suffered an embarrassing error as NBC showed they can’t tell their Asian countries apart by running b-roll of five South Korean flags flapping in the wind when talking about its neighbor. Given the fraught history between the countries, it’s all the more embarrassing.

Co-host Hoda Kotb signaled in an opening tease that the network would tie our mass shootings to Abe’s death: “This morning, what we know about the motive and the investigation into how it happened in a country where gun violence is nearly unheard of.”

Well, with gun violence front and center right here in the United States, we should point out incidents like this are extremely rare in Japan. There were only ten reported gun incidents last year. And that left just one person dead.

Frayer must have also received the talking points, stating early in her report that Abe’s “death is profoundly shocking for Japan, a country where gun violence is almost nonexistent.”

Moments later, she reiterated that Japan’s “unaccustomed to gun violence” with Friday’s attack having been “exceptionally rare” because “[i]ts gun laws are the most stringent in the world.”

As CBS’s Elizabeth Palmer did last month in a segment touting Japan’s gun laws, Frayer summarized what it’s required to purchase a firearm:

Though some guns are allowed for hunting, very few people go through the process of getting one. A person needs to pass through 12 steps, including a gun safety class, a written exam, doctor's sign-off, and extensive background check to buy and own a firearm.

But, unlike Palmer, Frayer chose not to smear Abe, pointing out he was “still prominent after stepping down” two years ago for “health reasons.”

Frayer explained that Abe “was credited with invigorating the economy, also reinvigorating diplomacy, meeting with dozens of world leaders,” “golfed five times with President Trump and took President Obama for that deeply symbolic visit to Hiroshima.”

“As a politician, Hoda, his views may not have been widely popular, but as a figure. he was. And that Abe's death was by gun violence, that will deeply impact people in Japan. I don’t think that point can be overstated,” she said.

Over on Good Morning America, foreign correspondent Lama Hasan called “Abe's assassination...unthinkable,” but she too ascribed the incident to “gun violence,” which “is extremely rare in Japan and the country has some of the strictest gun laws in the world” and “rarely more than ten gun deaths a year.”

Shootings are almost unheard of. Guns are highly restricted here. This type of crime is very rare. Now, there's been bombings, of course, there's been poisonings, there's been knife attack, things of that nature, but as far as guns go, they're almost nonexistent here.

That said, ABC largely took the higher road in both discussing the attack and memorializing Abe (click “expand”):

STEPHANOPOULOS: Breaking news, brazen assassination. Former Japanese prime minister Shinzo Abe gunned down in broad daylight while giving a speech. The shooter taken down at the scene. The weapon apparently homemade found on the street. What we know this morning as worldwide reaction pours in.

HASAN: Abe was a popular leader and became the country's longest serving prime minister. At the time of the attack, he was giving a speech in support of a party member ahead of parliamentary elections this weekend. Despite stepping down, Abe remained a major power broker, both domestically and internationally helping shape American foreign policy in the region for years.

STEPHANOPOULOS: You know, it’s hard to overstate how much shock Japan is in from this shooting. Abe was one of the most consequential leaders in post-war Japan. They have no real history of political assassination since World War II. And as Lama’s piece pointed out, ten or fewer gun violence deaths a year in that country. That is such a shock for this country.

While they were busy smearing Abe’s character, CBS Mornings make the gun control connection with co-host Tony Dokoupil noting Japan “has so little gun violence” and wondered whether there’s been a “response...when it comes to gun policy” as if to suggest it needed further tightening.

This desperate and gross attempt to tie gun control to a major political assassination hours after it took place was made possible thanks to advertisers such as Target (on ABC) and Wayfair (on NBC). Follow the links to see their contact information at the MRC’s Conservatives Fight Back page.

To see the relevant transcripts from July 8, click here (for ABC) and here (for NBC).