It’s Their Super Bowl: Networks Go All Out With 90 Minutes on January 6 Anniversary 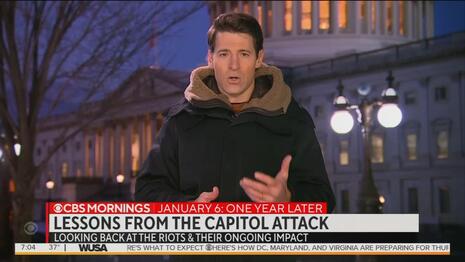 On Thursday, it was the liberal media’s Super Bowl and on the first anniversary of the January 6, 2021 riot at the U.S. Capitol as, according to a NewsBusters analysis of the major broadcast network morning newscasts, ABC’s Good Morning America, CBS Mornings, and NBC’s Today spent roughly 90 minutes dissecting, obsessing over, and painting the 75 million-plus Trump voters as enemies.

The networks specifically combined for 89 minutes and 31 seconds and, of that, a whopping 50 minutes and 28 seconds came from CBS Mornings with co-host Tony Dokoupil anchoring from outside the U.S. Capitol, introducing and/or leading ten of the 11 January 6-related segments.

Starting with remarks about denouncing Republicans as the only party delegitimizing elections with January 6 being “the moral question of our time,” it was all downhill as he implied the right could carry out “a new and more violent political era,” painted opposition to Democratic proposals on voting as dangerous and compared January 6 to September 11, 2001.

And that was just in the first 15 minutes. To see more from Dokoupil and his CBS colleagues, check out Scott Whitlock's wrap-up here.

All told, there were only three blocks that didn’t have to do with January 6 with one on the coronavirus, a report on the fallout from the Ghislaine Maxwell verdict, and three news briefs in the show’s “Talk of the Table” segment (which touched on the Grammy’s being postponed, tennis star Novak Djokovic, and NFL wide receiver Antonio Brown). 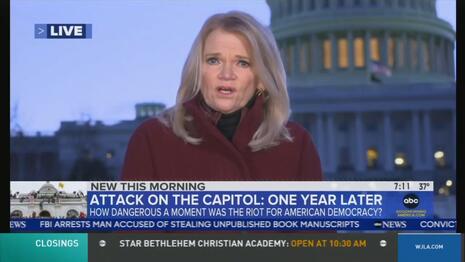 In one of the only redeeming moments, new CBS congressional correspondent Scott MacFarlane acknowledged in the 8:00 a.m. half-hour the Republican pushback to jailhouse conditions for those charged in the riot and said the party has also “been...critical of the Justice Department for going harder, they argue, on January 6 defendants than on those arrested for racial unrest in 2020.”

And on ABC, GMA came treated January 6 almost as if it were any other story with only 16 minutes and 12 seconds. That said, chief global affairs anchor Martha Raddatz compared 1/6 to 9/11 and co-host/former Clinton operator George Stephanopoulos said what took place “a scene” that was “surreal, unsettling, ultimately terrifying unlike any our nearly 250-year-old democracy had ever seen before.”

Their obsession with January 6 and, more important, the framing of Republicans writ large as enemies was made possible thanks to the endorsement of advertisers such as Geico on ABC, Chevy and Progressive on CBS, and Amazon on NBC. Follow the links to see their contact information at the MRC’s Conservatives Fight Back page.