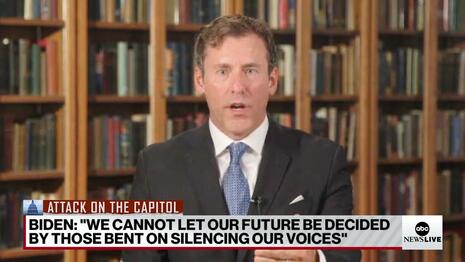 Continuing Thursday’s theme of news organizations allowing all nutty comparisons to fly on the anniversary of the January 6 riot, ABC News presidential historian Mark Updegrove proclaimed after President Biden’s “powerful” speech that it belonged alongside those from “FDR after Pearl Harbor,” “Lyndon Johnson after Selma,” “George W. Bush after 9/11,” and, most egregiously, Abraham Lincoln’s Gettysburg address.

Appearing on the network’s streaming platform and asked by host Kyra Phillips whether “history” can “be rewritten,” Updegrove replied that “the future of the country is at stake” without heeding Biden’s words (and thus his agenda), which served as “a powerful statement about democracy.”

“This was FDR after Pearl Harbor. This is Lyndon Johnson after Selma. This is George W. Bush after 9/11. Joe Biden wasn't able to make a statement after – after January 6th,” Updegrove said, adding that Biden had “wanted to unite the nation” at his inauguration, but it was time for a change.

Updegrove explained that Biden “had to take President Trump on because this is the one who is propagating this lie that's holding us back as a nation and I think Joe Biden did that very forcefully, very powerfully today.”

Calling his thesis “nothing less than Americanism versus authoritarianism,” he fawned over the President’s remarks as having “delivered” on the “powerful, unambiguous statement that…sometimes, presidents are called on” to do.

Unfazed by the insanity that, as per his logic, Trump supporters are akin to al-Qaeda hijackers and Japanese bombers, Phillips invited him to explain “why is it so important for us to continue to remember this moment in history as we move forward.”

Arguing there was a need “to contextualize moments like this in order to cement history,” Updegrove reached for a supposed comparison in the form of perhaps the most famous speech in American history: the Gettysburg address.

“Think about Lincoln at Gettysburg, Lincoln went back to that hallowed battleground and he talked about what it all meant. Not only on that day but for the future of this nation and he did so masterfully. That's the kind of speech that Biden had to make today. We're at a crossroads in our country,” he added.

Updegrove concluded by again praising Biden for having urged the country to action because, in the past, we were unsure if “we would defeat tyranny” after Pearl Harbor or thwart future attacks after 9/11.

Also the head of the LBJ Presidential Library, Updegrove’s statements weren’t the only statements divorced from reality on ABC News Live.

Echoing progressive ABC News contributor Yvette Simpson’s insistence that tens of millions of Americans are worth fearing, senior national correspondent Terry Moran lamented that Biden faced a “daunting…task” in fulfilling his call to restore “the soul of America,” because of Americans who’ve “been caught up in right-wing media conspiracy theories” and thus lack “a common soul” with the rest of the country since they “don’t share a common reality.”

Earlier in reacting to Biden’s speech, senior political reporter Devin Dwyer engaged in a tiresome trope by tying Republican-backed voting measures to rigging future elections and, in a bizarre turn, political director Rick Klein acknowledged the people they’re calling out as dangerous is “very small,” but then went back to painting Republicans writ large as dangerous (click “expand”):

DWYER: I heard this speech as an acknowledgment that the Big Lie is metastasizing in this country. Things are getting worse. All that gauzy talk about unity in the inaugural a year ago has sort of washed away and that's why we saw this pivot. You know, the President talked about it, alluded to it, but more Republicans now than a year ago think the election was stolen. We have seen more states passing restrictive laws. All of those things are very troubling, sobering indeed. In fact, I have been following the legislation in the states. 19 states, dozens of restrictive measures to secure elections. And let’s not forget, all of us want a secure vote next November in the midterms, of course, but a lot of these restrictions that states are passing are predicated on the fact that the last election was flawed.

KLEIN: I am struck, Kyra, by how few defenders there are of Trump's version of January 6th. The idea these were peaceful patriots. It gets a lot of play but that's a very small minority of actual members of Congress, sitting Republican officials. Most aren't trying to – to brush aside the reality of the crimes that were committed. They were crimes, as courts of law are litigating, a year ago. But what is also true, is that there's a band of officials who are running for – for elected office in many states, including some of the most contested ones from last time, who are more clearly in the Trump camp. They are running explicitly to try to change the machinery of government in a way that would have made it easier to actually do the things that President Trump said needed to be done back in 2020 and early 2021. They say that there was an election that was stolen. And they are running now for positions like governor and attorney general and secretary of state and the United States Senate and the United States House. And there's a possibility that they win…[T]hat's the threat that you hear President Biden today trying to confront. We didn't hear a lot of gauzy talk about how Republicans are going to come together in this moment. This was, I think, a very clear-eyed call to arms for Democrats and for Republicans like Congresswoman Comstock who say that there needs to be reckoning with what the party represents and voters ultimately are ultimately going to have their say in the elections that will color this year.

And to serve as the token Republican, former Congresswoman Barbara Comstock (R-VA) gushed over Biden’s “very strong speech” even though she’s “still a Republican” and the January 6 committee as possessing “beauty” because of the documents and texts they’ll publish.

[W]e're going to see this timeline, those 187 minutes that Trump sat there gleefully watching the TV and as Stephanie Grisham, his wife's chief of staff said, he was enjoying that these people were fighting for him. So, as this public record is carefully documented and – and a timeline is laid out that while people were being beaten up and were suffering, this President didn't care…[H]e is going to be diminished. It's hard work. It's not going to be easy. But what you have to keep doing and I encourage the media to do is to show those statements of what those people said on January 6th. There should be nobody who can come on TV without being confronted by their texts and statements that they made on those days leading to January 6th and after and be confronted with them because what they said privately to the President and what they've said publicly since are two different things. And it's going to be shown for the fraud that it is. And I thank my friends, you know, Liz Cheney and Adam Kinzinger for their courage because it's not been easy and the kind of death threats that they're getting and threats coming from others because of Trump's just sore, loser, revenge tour that he's on[.]

Due to it having aired on ABC News Live, there were no commercials.