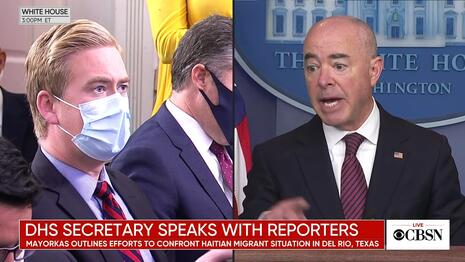 The Psaki Show went into the weekend on Friday with a bang thanks to an appearance from Homeland Security Secretary Alejandro Mayorkas amidst the latest Biden border crisis and the administration peddling false claims that Border Patrol agents treated Haitian illegal immigrants like cattle and used whips against them. Of course, Fox’s Peter Doocy was there and fought with both Mayorkas and Press Secretary Jen Psaki over their lies.

Doocy went right after Mayorkas with a fact-check using the latter’s own words:

You said on Saturday — or rather, on the 20th — to ensure control of the horse, long reins are used. The person who took these photos of the Border Patrol agents says, “I've never saw them whip anyone.” So, why is the President out there today talking about people being “strapped?”

Mayorkas snidely replied that he needed to “correct that statements in your question, if I may” as his initial comments that didn’t smear the Border Patrol came “when I was in Del Rio on the ground and I made the statements without having seen the images.”

Though Doocy wasn’t saying a thing, Mayorkas repeatedly snapped at him, demanding, “let me finish” as he said, upon further examination, what took place “horrified the nation” and “raised serious questions...about what occurred and, as I stated clearly, it conjured up images of what happened in the past.”

Incredibly, Mayorkas added that he’ll “let the investigation run its course” and he won’t “interfere with” it.

Doocy wasn’t having it: “And just, to follow-up, please. Before the facts are in, is it helpful to your investigation for the President of the United States to use inflammatory language like people being strapped?”

An annoyed Mayorkas seemed incensed that Doocy would challenge him, arguing he’s “not concerned with the respect of the integrity of the investigation” and his own conduct has been pitch perfect because he “served as 12 years as a federal prosecutor.”

Elsewhere in Mayorkas’s portion, CBS News Radio’s Steven Portnoy led off the Q&A by asking for specifics as to how “these agents on the border acted in a way that violated policies or procedures” and whether the incident has influenced the administration’s thinking towards more asylum.

Mayorkas said that the use of horses by border agents “conjure[d]” up in terms of not only our nation’s history, but unfortunately the fact that that page of history has not been turned entirely and that means that there is much work to do.”

In his opening remarks, Mayorkas even called their use an example of “systemic racism” even though, as he also said, horseback officers have conducted rescues that have saved migrants over the years.

Two other reporters with productive questions were CNN’s Phil Mattingly about whether the administration ignored warning signs of the surge and then Fox News Radio’s Rachel Sutherland on whether there were any Covid cases detected within the 15,000 Haitians (click “expand”):

MATTINGLY: Alright, Mr. Secretary, I understand you guys have been saying since January 20th, you inherited a broken system, there's a lot of work to be done here. But you had thousands of people living in squalid conditions, limited opportunities to go through asylum processes here. Advocates have been warning about situations like this for months now. How much responsibility do you — does the administration take for these situations continuing to kind of pop up in various places?

MAYORKAS: So if you're addressing the situation in Del Rio, I will tell you that it is unprecedented for us to see that number of people arrive in one discreet point along the border in such a compacted period of time. That is unprecedented. We have the chief of the border patrol, Raul Ortiz, is, I think, a 30-year veteran and he has not seen that before. What we do when we see something unprecedented is we respond and respond we did.

SUTHERLAND: The congregation under the bridge and congregating there. You just mentioning [sic] Covid. What is the situation there? I know that the crowd has been dispersed. Do we know who has tested positive? Have people who got sick? Any symptoms among this group of 15,000, you said?

MAYORKAS: Yes, so we do not — we did not test that population of individuals. We do not — I do not know, I should say, if I may be perfectly accurate, I do not know whether anyone was sick with Covid. We certainly had some individuals get sick, not specifically with Covid to my knowledge and we addressed their illnesses. In fact, we set up medical tents that had a certain standard of ability to address medical needs. It is — it was — it is hot in Del Rio, Texas. We had cases of dehydration. We had other situations. And this is precisely why we surged 150 — approximately 150 medical professionals to address the medical needs of that population. That is why we set up medical facilities with the appropriate equipment to address their medical needs. And I must say, what I saw of the border patrol and other personnel was quite frankly heroic. Tey took — this is not their customary obligations and, yet, they took great pride in addressing the needs of the people.

And in a move that would have gained them national stardom under Trump, one reporter spent almost four minutes fighting Mayorkas by claiming the administration has engaged in “violence” against Black people, adding that the fake whips story (which he still believes in) was a “true graphic representation of the way” they’ve “been treated.”

Shifting to Psaki, Doocy also came out swinging. Before talking about the border, however, he had a Hunter Biden question (and one that Psaki had ignored from Newsmax’s Emerald Robinson):

[T]he President has said, and you have tweeted, that allegations of wrongdoing based on files pulled from Hunter Biden’s laptop are Russian disinformation. There is a new book by a Politico reporter that finds some of the files on there are genuine. Is the White House still going with Russian disinformation?

Psaki’s response? A pants-on-fire lie: “I think it’s broadly known and widely known, Peter, that there was a broad range of Russian disinformation back in 2020.”

Seeing as Psaki wasn’t going to budge, Doocy doubled back on a question from Wednesday on whether Biden has ever been to the border (click “expand”):

DOOCY: Following up on a question from earlier in the week, why hasn’t President Biden ever visited the southern border?

PSAKI: What would you like him to do at the southern border? And what impact do you think that would have on the policies?

DOOCY: Why doesn’t he want to go?

PSAKI: I don’t think it’s an issue of wanting to go. I think it’s an issue of what’s most constructive to address what we see as a challenging situation at the border and a broken immigration system. And his view is the most constructive role we can play is by helping to push immigration reform forward, helping reform the broken policies of the last several years and listening to his team of advisors who have been to the border multiple times about what the path forward should look like.

DOOCY: Why is this the one crisis then that he thinks he can manage better from here without having seen it than going to the southern border and seeing it?

PSAKI: I can assure you, the President is well aware of what the challenges are in our broken immigration system, something he watched closely over the last four years.

And, as there was the Mayorkas questions, other White House reporters came prepared with hardballs for Psaki.

Along with the Daily Caller’s Shelby Talcott inviting Psaki to provide “tangible examples” of Vice President Harris’s supposed efforts to go after “the root causes of migration,” Portnoy and ABC’s Karen Travers pointed out that Biden’s condemnations of the Border Patrol before the completion of an investigation could be seen has putting his thumb on the scales (click “expand”):

PSAKI: I think what you heard from the President is a very human and visceral response to those images, which I think reflects how a lot of people in the country felt when they saw them. There is an investigation the Department of Homeland Security is overseeing that will determine what the personnel decisions may be, any other policy decisions, and that needs to see itself through. But I think the President wanted to make clear to people who watched those photos, who had an — understandably emotional responses that that’s not acceptable to him, even while the investigation is happening and moving forward, that will determine what the consequences will look like.

PORTNOY: Just to put a fine point on your answer to Karen’s question.

PORTNOY: I’m sure that the union officials and lawyers who will be representing these agents —

PORNOY: — want to know: Is it your view, or the White House’s position, that what the President said this morning is not legally operative with respect to consequences and these people paying? It was simply his personal view and not representative of actions that the government will take?

PORTNOY: But he is the head of the executive branch, the Constitution invests him with the authority in Article II. You’re saying that what he said will not necessarily be the outcome?

PSAKI: Again, there’s an investigation that’s ongoing. I don’t know that anyone saw those photos and didn’t have a similar reaction to the President’s, and that was what it was a reflection of.

To see the relevant briefing transcript from September 24 (including a victory lap regarding the fake whips story from Al-Jazeera’s Kimberly Halkett, click here.