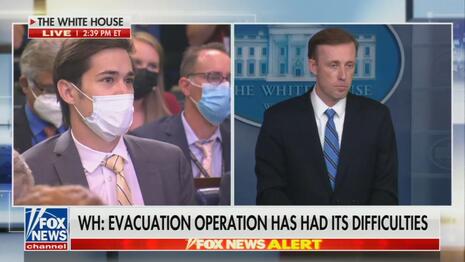 To go along with two horrendously bad Pentagon press briefings and another at the State Department, the White House joined in Monday afternoon with a shellacking at the hands of the press corps on Afghanistan. For this installment, National Security Advisor Jake Sullivan and Press Secretary Jen Psaki took fire from all angles, ranging from Fox News to NPR.

Led by Fox’s Peter Doocy and Real Clear Politics’ Philip Wegmann, Team Biden was grilled about whether Americans have been “stranded” by their own government, whether Americans outside Kabul will be rescued, and how can the U.S. take to heart anything that emanates from the Taliban.

Sullivan first stepped to the plate and, after ducking introductory questions from CBS’s Nancy Cordes, CNN’s Phil Mattingly, and two others, NPR’s Ayesha Rascoe fired off a heater about “why didn't the administration prepare the American public” for the “rough” and “very chaotic scenes” inside Afghanistan if such images of death and heartbreak were inevitable, regardless of when the U.S. withdrew.

Fast-forward a few minutes to the one-two punch of Doocy and Wegmann, which featured the latter telling Sullivan that Biden “has criticized his predecessor,” “the Afghan army,” and “the Afghan government for all of their failures,” but not the Taliban.

Wegmann asked why that was the case and, on a related note:

[W]hy does the President continue to say that the Taliban is facing an existential question about how they'll be viewed on the world stage? I mean, they're going door-to-door, going after the families of these translators. Don't they already know who they are?

Sullivan responded to this humdinger by insisting Biden “has been very clear about his views of the Taliban” in not trusting them (even though they’ve said they need their help to get Americans and Afghan allies out of their clutches).

Doocy followed by calling out the disconnect between Biden and his administration on whether there’s al-Qaeda in Afghanistan: “[A]re you presenting the President with the full picture, or is he just misapplying the intelligence when he makes these public statements?”

Before giving way to Psaki, Sullivan received more excellent questions from other reporters (including The Grio’s April Ryan) (click “expand”):

CHRIS MEGERIAN [Los Angeles Times]: Is — does the administration regret not moving quicker to evacuate more Afghan civilians who worked with the United States?

SEAN SULLIVAN [The Washington Post]: Jake, does the President intend to fire, reassign or ask for the resignation of any White House personnel or administration officials who handled the situation in Afghanistan?

STEPHANIE RAMOS [ABC]: What if the U.S. can't get Americans and Afghan allies out of the country by August 31st? What happens then if the Taliban says they are not willing to extend? Is the U.S. going to abide by their red lines?

MICHAEL SHEAR [The New York Times]: Jake, two things. One, just a clarification. You had said that all Americans in Kabul who want to get out can get out. Did you mean Kabul or did you mean the entire country? And — and second, one of the things that you all bragged about over the weekend was the rapidity with which you guys negotiated over the last several days with third countries the ability to bring flights in to, you know, to expand the number of places throughout Europe and the Middle East. Why wasn't that done months ago? I mean, you yourself have just said, you knew exactly that this chaos was going to erupt at some point. Why would there be the need to negotiate on the fly with these countries if — couldn't that have been done before?

RYAN: Jake, I want to get into the weeds a little bit more on how this administration is determining who is still left, what Americans are still left, and which ones? Cause, as you said, there’s some people who did not de-register with the embassy. How is the administration trying to determine who is there and who is not?

Globo TV’s Raquel Krähenbühl ended Sullivan’s turn with two excellent questions. After her first about whether Biden would consider speaking directly with the Taliban, she brought up America’s global standing (in a foreshadow to what Doocy would later say to Psaki):

President Biden seems to be keeping the America first policy on Afghanistan. How you can say that America is back on the global stage after seeing these scenes in Afghanistan and how do you think the world is looking at the United States right now?

Speaking of Doocy, he eventually got his first crack at Psaki in over a week, and needless to say, he didn’t waste it.

Doocy led off with a basic concern about how are “America’s national security interests” being advanced by the fact that “[t]here are Taliban fighters right now carrying American weapons” and “American fatigues” to make for “[t]he full kit of gear.”

When Psaki had only word salad, Doocy inquired whether Biden knows that “most of the criticism is not of leaving Afghanistan, it’s the way that he has warranted it to happen, by pulling the troops before getting out the Americans who are now stranded.”

Psaki was incensed, telling him “it’s irresponsible to say Americans are stranded” when “[t]hey are not.”

Though those comments would be panned afterward, Psaki doubled and tripled down about America “lead[ing] the world” in getting people out of Afghanistan and proving Biden’s moniker that “America is back” (click “expand”):

DOOCY: There are no Americans stranded is the White House's official position on what is happening in Afghanistan right now?

PSAKI: I’m just calling you out for saying we are stranding Americans in Afghanistan when I said — we have been very clear that we are not leaving Americans who want to return home. We are going to bring them home. And I think that’s important for the American people to hear and understand.

DOOCY: Following up on what somebody asked Jake, the President likes to say “America is back.” But his policies have Americans getting beat up by the Taliban and Afghans handing babies over barbed wire fences. Is that what he meant when he said, “America is back?”

PSAKI: What the President meant is that we are going to continue to lead in the world, including being the leaders and evacuating not just our Afghan partners, not just American citizens, but now also our allies. And we have done that by evacuating approximately 42,000 people over the last month. That is Americans leading. That is the men and women in our military leading on the ground, securing the airport after the Afghans fleed [sic] and did not secure the airport, and ensuring we are taking care of our partners as we promised to.

NBC’s Kelly O’Donnell unsuccessfully tried a gentler route: “Would you acknowledge there had been a particularly challenging period for the President? And there have been questions about his decision-making amongst some Americans reflected in the polls.”

Though the briefing ended on a softball from AFP’s Sebastian Smith, others that advanced the ball with substantive Afghanistan questions included longtime radio reporter Bob Constantini, The Wall Street Journal’s Andrew Restuccia, and The Post’s Sullivan (click “expand”):

SEAN SULLIVAN: [D]oes the President see any substantive differences between the Taliban leadership that exists right now in the regime that existed two decades ago?

CONSTANTINI: By just the general public opinion or whatever with these pledges from him, from Jake, and others. Doesn't it put the President on the spot a little bit, don’t you think?

RESTUCCIA: Jake mentioned that the U.S. would try to extract Americans who are outside of Kabul and other parts of the country. Does that apply also to Afghan SIV applicants who are also in that same situation, trapped in rural areas and they can’t make their way to Kabul because the Taliban is — is controlling the roads?

SMITH: This is related to Kelly's question about the polls and the political fallout. Is the president concerned about the Afghan crisis causing a loss of momentum on all the other things he’s been trying to do? It’s a pretty unique situation to have such an enormous domestic crisis with the pandemic and a lot of people still not wanting to get vaccinated. Now, the Afghan thing, which is naturally sucking up all the attention and effort and energy and his landmark piece of legislation, which is now hanging in the air? Can you just describe — give us a little bit of overview of the bandwidth that you have — or that he has for — I’m sure he wasn’t expecting to be here, back in the summer of freedom?

To see the relevant briefing transcript (including questions from Rascoe and USA Today’s Joey Garrison on the deadline for the U.S. review on the origins of the coronavirus), click here.