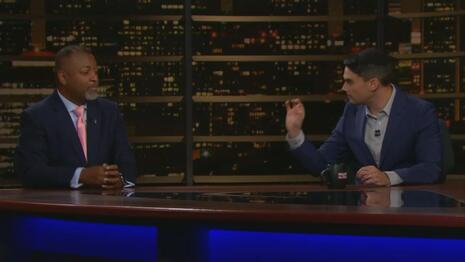 Daily Wire co-founder, author, and conservative podcast host Ben Shapiro entered the lion’s den on Friday night of HBO’s Real Time and, while he found plenty of agreement with host Bill Maher about the radical nature of the far-left, he repeatedly trounced far-left MSNBC contributor Malcolm Nance on everything from critical race theory (CRT) to the events of January 6 to free speech rights.

Towards the end of the lengthy panel discussion (lasting well over 20 minutes), Nance came off as embarrassed and pleading with Maher to move on. For his part, Maher appeared irked at Nance’s strawmen and refusal to engage in an actual debate with Shapiro.

Maher began with Fox News host Tucker Carlson’s trip to Hungary and meeting with President Victor Orban as a way of roping in Shapiro’s new book The Authoritarian Moment to lament that he didn’t talk about authoritarianism from the right.

Shapiro stated that “Donald Trump’s attempts to overturn the elections” were unsuccessful as our “institutions did not stand with him” whereas “every single major institution mobilized on behalf of Black Lives Matter.”

Nance responded with the first of many fallacies and lies when he claimed that Trump “mobilize[d] 40,000 people to lay siege to the Capitol” and dismissed the woke mob as just Twitter “gossip.”

Shapiro quickly hit back with a fact-check and, after Nance insisted his “facts” about the 40,000 were merely semantics, the conservative author called out Nance’s poisonous shtick, including his “terrible habit of conflating people who do actual violent activity with a broader rubric of” all Trump voters (click “expand”):

SHAPIRO: A couple of quick things. One, 40,000 people did not assault the Capitol, okay? That especially inaccurate. There were maybe a thousand people. That is not making light of the evil of those people who will all end up rotting in prison as they should.

MAHER: We have a short amount of time.

SHAPIRO: — I’ll tell you — this is very quick — I’ll tell you why this is an important point, very quick, because, Malcolm, you have a terrible habit of conflating people who do actual violent activity with a broader rubric of everyone, for example, who voted for Trump, which was 75 million people, and that really is ugly. You’ve tweeted about me, for example, that I’m such a racist I shouldn’t be allowed in Washington, D.C. That sounds rather authoritarian in attitude to me. I’ve never called for you to be kicked off of MSNBC; I’ve never called for anybody not to buy your book. I’ve never called for anybody to censor you on Twitter. I am talking in my book about the attitude that suggests that people who are outside the Overton Window should meet with not only with a social ostracization, but they should meet with real-world consequences that do affect their lives.

Nance’s comeback was almost too good to be true as he decided to lecture the Orthodox Jew on...the Holocaust.

Talking about how he had spoken at an Auschwitz Foundation event on autocracy, Nance argued that Shapiro’s “book authoritarianism” and what people say on Twitter were puny in nature compared to Vladimir Putin’s vast tentacles,

Following Shapiro’s one blow to Maher over the latter’s false claim about the GOP having a “dictator immunity,” Shapiro correctly stated that he “feel[s] like I’m living in a bit of a parallel universe in the sense that right now, the House, the Senate and the presidency of the United States,” and major non-governmental institutions were all dominated and run by Democrats as they exact Covid mandates and control over the masses.

Instead of taking Maher’s invitation to talk about how the far-left’s social media plea to defund the police was an example of a Twitter proposal that’ll get people killed, Nance wanted to continue screeching that Trump was still the greatest danger to our democracy

Shapiro replied with a simple question: “Malcolm, I’ve notice how, when you talk about the last four years we are on the verge of autocracy, when were — did your last book come out?”

When Nance said two years ago, Shapiro noted that Trump didn’t throw him in jail over it, but the MSNBC contributor by implying the then-President had control over the TV network in temporarily forcing him off the air.

Of course, Nance never acknowledged what he said that got him in trouble.

The trio’s third topic concerned CRT with Shapiro delivering an incredibly thorough but brief definition, which one can read in full here (via our friends at Shapiro’s Daily Wire) or in the full transcript in the link at the bottom of this blog.

Nance ruled that Shapiro was right and those things should come to fruition because, in his warped, Joy Reid-like world, broad topics like slavery and specifics like the Chinese Exclusion Act were never discussed in schools.

After another round of cross-talk (including Shapiro noting that Nance has benefitted handsomely from the system he’s saying must be torn down), Nance erected a strawman the size of a skyscraper (click “expand”):

NANCE: You know, you know, when my great-great-grandfather ran away from slavery to join the 111th U.S. Colored Troops and fight against the South keeping human beings as slaves, he didn’t think, you know what, in 150 years, my great-great-grandson is gonna have to sit on stage and argue with the guy who thinks all that’s bullshit.

MAHER: What is he saying is bullshit?

SHAPIRO: All of what is bullshit?

NANCE: — there is no controversy —

NANCE: — the controversy that’s made up is people saying that this is being discussed —

NANCE: — that this being taught in schools and that kids should be kept away from it.

SHAPIRO: — Malcolm, the fifth largest school district in America, Clark County, just decided that they were going to lower standards with regard to testing because they wanted to alleviate disparities in outcomes. That is an outgrowth of critical race theory.

NANCE: Can you draw a straight line to it?

SHAPIRO: 100 percent. Because when you say that the meritocracy is an outgrowth of white supremacy —

SHAPIRO: — and then you suggest that I’m somehow denying that slavery took place —

SHAPIRO: — or that your great-great-grandfather was a hero because I am saying that I want people tested when they are in school to see if they are good at school —

SHAPIRO: — then what you are purporting to push, Malcolm, is nonsense and just sheer —

MAHER: Yes we can!

SHAPIRO: You just did.

MAHER: And I don’t — I don't know who is against talking about history.

Maher reasserted himself as host and walked through how most Americans wouldn’t object to inequalities, racism, and slavery being taught in schools, but CRT goes in a dangerous direction by talking about “collective guilt,” new racial segregation, and “a toxicity of just from being born white.”

Nance said the latter wasn’t CRT at all, so an exasperated Shapiro leveled the final boom about how he’ll leave this debate to “comfort myself tonight by sleeping on my bed made of money” (click “expand”):

SHAPIRO: If we agree that history should be taught, why are you defending critical race theory, which is not history?

NANCE: Did I not just say a moment ago that I think that term has been hijacked and that’s not what we’re talking about?

SHAPIRO: Then why are you defending it?

NANCE: — and repeat that I didn’t say that.

SHAPIRO: You — you are literally defending critical race theory by redefining it as just teaching history which is a cheap semantic trick and you know it.

NANCE: Is this what you do on your show because it sucks?

SHAPIRO: You know, Malcolm, I —

SHAPIRO: — Malcolm, I appreciate that, but I —

SHAPIRO: — I will — I will comfort myself tonight by sleeping —

SHAPIRO: — on my bed made of money.

NANCE: I’m sure we have an adult —

Ouch. Afterwards, Shapiro said in a statement that the show was an example of why “the Left plays semantic games when it comes to critical race theory: because when advocates for CRT are confronted with the overt racism of the program, they can’t defend it.”

To see the relevant transcript of this blockbuster debate, click here.