On Friday afternoon, CNN chief White House correspondent Jim Acosta found himself in his usual spot, which was rhetorically falling flat on his face and getting owned in embarrassing fashion by White House Press Secretary Kayleigh McEnany.

And to make matters worse for the liberal media, McEnany ended the briefing by citing NewsBusters for our “extraordinary video” by Bill D’Agostino about the double standard between their fawning coverage of Black Lives Matter protests and vitriol for Trump rallies.

First, Acosta’s latest fail. About nine and a half minutes in to the briefing, he decided to waste everyone’s time by shoveling the CNN line that the President sharing a satirical video from our friend Carpe Donktum was “exploiting children to make some sort of crass political point.”

Yes, the same network that had to settle with Nicholas Sandmann, held a show trial run by far-left Parkland students, touted transgender children, and harassed private adults was really concerned about a parody video of two viral toddlers.

And if I can ask you about last night. The President weeded out some fake videos, one of which was labeled manipulated media by Twitter. Why is the President sharing fake videos on Twitter about two toddlers who are obviously showing a lot of love for one another? It seems as though he is exploiting children to make some sort of crass political point. Why was he sharing fake videos?

McEnany replied with the obvious, which was mocking how “CNN has regularly taken him out of context.” She added that if one wanted to talk about “a misleading video,” CNN’s deceptive videos and lies about Sandmann and his Covington classmates was something that actually “had really grave consequences.”

Acosta showed CNN doesn’t actually care about Covington or anyone’s life they ruin, complaining that Trump “exploit[ed] two toddlers hugging one another on a sidewalk to make some sort of political point” and, by doing so, made the White House peddlers of “fake news.”

Wait until Jim finds out what The Onion and Babylon Bee do!

Spoiling for a fight, Acosta continued to ramble, showing his deep-seated hatred for the Trump administration, rallies, and supporters. At one point, McEnany reminded him that “you got to let me finish, Jim” because “this isn't a cable news segment” (click “expand”):

MCENANY: I think the President was making satirical point that was quite funny if you go and actually watch the video.

ACOSTA: What’s funny about these two toddlers hugging one another?

MCENANY: I think he was making — he was making a — the point is it was a play on CNN repeatedly taking the President out of context like the time when you guys had a chyron that read “Trump slams some illegal immigrants; “They’re animals.” Well, guess what? The people he called “animals” were MS-13 illegal immigrants who regularly mutilate people in this country. Those things are entirely misleading.

ACOSTA: If you don’t mind me pointing out, the President —

ACOSTA: — referred to some Mexican immigrants as rapists. He has tried to pass a Muslim ban in this country. He has described black NFL players as sons of bitches if they take a knee —

ACOSTA: — during a football game.

MCENANY: — that’s an absurd attempt to justify the misleading headlines that are regularly on your network, like, I was just walking in, watching CNN as they lauded the “rallies” —

ACOSTA: — are saying that the President never stokes this sort of —

MCENANY: You got to let me finish, Jim. This isn't a cable news segment, I am answering your question right now from the White House podium.

MCENANY: When I walk out of here —

ACOSTA: — by trying to turn it around and throwing it at CNN.

ACOSTA: You’re not answering the gist of the question —

ACOSTA: — which is why put out fake news?

MCENANY: — when I see on your network celebratory headlines about the rallies and the protests outside and you actually said protests and rallies. So, in light of the protest, if these gatherings happen in light of a protest or a rally as you say, that rally is to be condoned, but not the president's rally. It's appalling. I mean, you have one person on your network saying that this is a celebration in the streets, a carnival-like atmosphere. There’s a guy with a sign that says free hugs. It’s beautiful what’s happening in the streets.

ACOSTA: Kayleigh, that’s happening. Some of the protests have been peaceful, have — some of them —

MCENANY: There is music, people are hugging. You celebrate hugging in the context of a protest. But in a trump rally where we celebrate historic low African-American, criminal justice reform, HBCU funding —

ACOSTA: You also chant “build the wall,” “lock her up.”

MCENANY: — that rallies is not allowed[.]

Trump rallies are nothing but Confederate flags and Q-Anon mentions? Then what is CHAZ/CHOP? Or the ransacked out bars, restaurants, and stores?

With Acosta continuing to mumble, McEnany ended by identifying the reason for the double standard in mass gatherings, which is that the Trump rallies don’t “fit the ideological agenda of CNN.”

McEnany took more questions on a variety of topics (including Yahoo’s Hunter Walker asking if Trump’s an “anti-fascist”) before ending with her usual closing mic drop. For Friday’s installment, she mentioned D’Agostino’s “extraordinary video” about the media’s mass gatherings double standard.

Here were her full remarks citing NewsBusters and quoting examples from the video:

One thing I would note and I just think it's very important, especially as we go into the weekend and we begin to look at some of the news coverage out there is that I would encourage all of you to cover the protests in the same way that you covered the rallygoers. It’s really quite something when you look at this extraordinary video by Media Research Center and NewsBusters where you have multiple hosts on MSNBC, CNN, CBS boasting about the “massive crowd, I mean massive, tens of thousands of people, thousands and thousands, up to 200,000 people,” they exuberantly proclaim, but then they have great concerns about the size of the Trump rallies.

You have MSNBC contributor saying “social justice over social distancing,” but when the President looks to celebrate the accomplishments for minority and communities [sic] in this country, our rallies are derided as “breeding grounds for coronavirus” while Lawrence O’Donnell celebrates arm-in-arm protests, so I really think that we should have internal consistency here in the way we cover large crowds. We should be guided by science, not just cherry-picking science as I see all too often on the airways, especially from CNN. 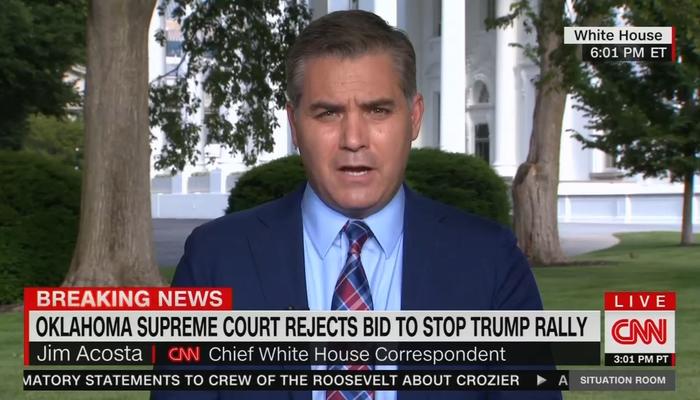 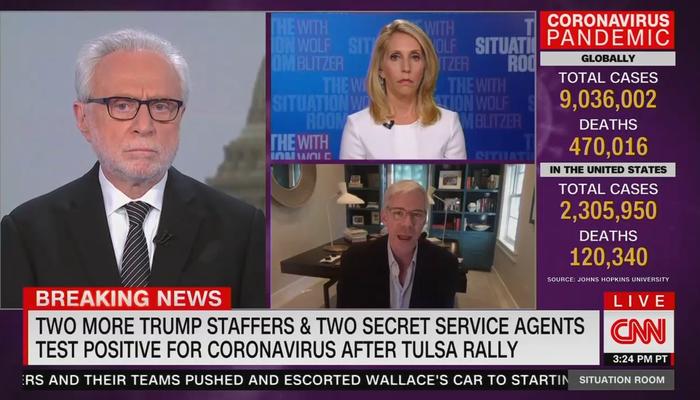 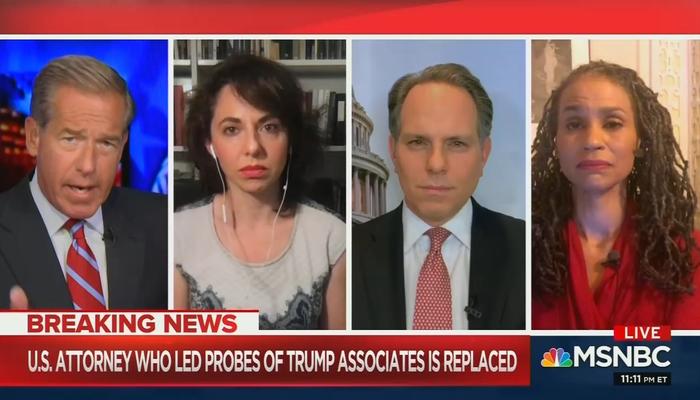 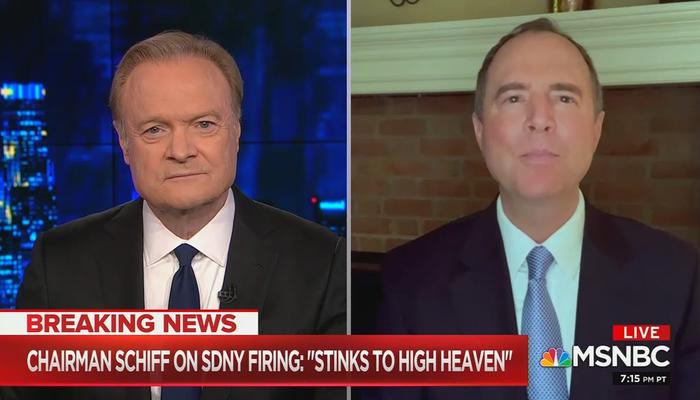 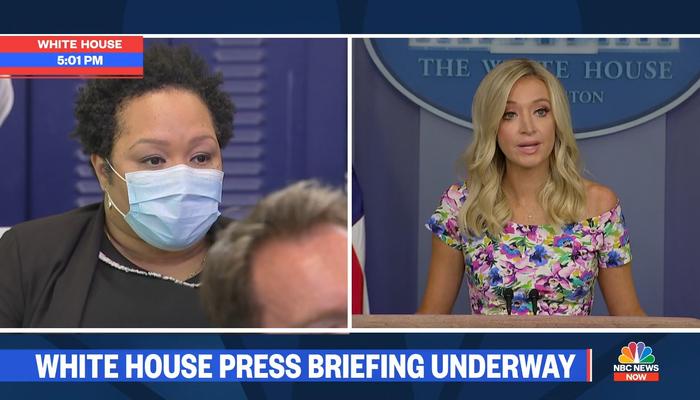 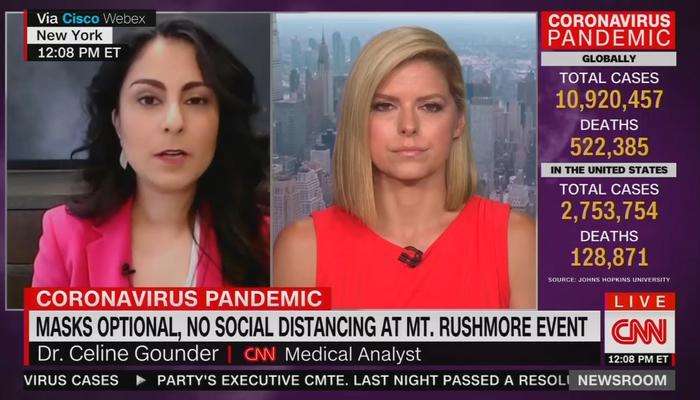 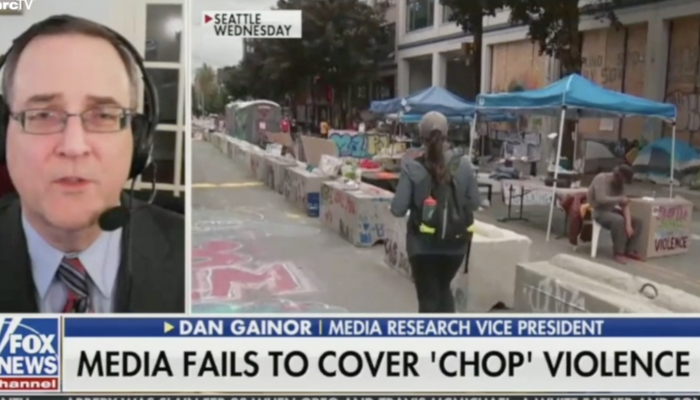 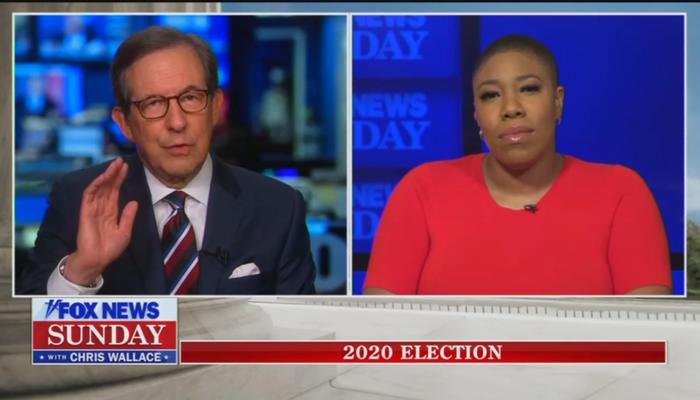