MSNBC Spends Two Hours Siding with Pro-China WHO Over U.S. Since Trump Is ‘Worse’

In the two hours during and after Tuesday’s White House Coronavirus Task Force briefing, MSNBC hosts Ari Melber and Chuck Todd worked with seven guests to mount a propaganda campaign to defend the World Health Organization’s coronavirus response, and in turn side with the corrupt WHO over the United States. Why? Because, in Melber’s words, President Trump was “worse” and defunding the WHO would mean “more people…catch this virus and die.”

And to make matters even more ludicrous, Melber brought on a WHO official to respond to the President and his “hijack[ing] of the briefing to attack other people, in this case, inaccurately attacking the WHO” when it “does a lot of good work.”

NBC White House correspondent Kristen Welker and MSNBC medical analysts Dr. Vin Gupta and Dr. Lipi Roy led off at 6:30 p.m. Eastern, parroting WHO talking points about how they have acted with nothing but clarity, decisiveness, and facts, while Trump was setting the stage for tens of thousands of Americans to die (click “expand”):

WELKER: [T]he President continues to lash out at is the fact that he accuses the WHO of being slow to respond to revelations that there was this outbreak in the Wuhan region of China. So, just to look at the timeline, December 31 was when the WHO became aware that there was this cluster, this outbreak in the Wuhan region of China. The very next day, they did appoint an incident management support team to look into this. They spent the next several days and weeks trying to determine how significant this outbreak was, what, if any, category it would fall into and then it was about a month later, January 30, that the WHO did come out and declare this a public health emergency and so President Trump trying to make the argument that that is too slow, the WHO would counter that, look, there was a process in place. They needed to investigate specifically what was going on, and those were the actions that were taken[.]

GUPTA: I mean, Chuck, if we didn’t have the WHO, we would have to invent the WHO. Yes, no institution is perfect, and they have had -- they have really had their struggles when it comes to post-Ebola. But this was entirely different….[T]here is something called the Contingency Fund For emergencies. Our contribution the last three years has been a grand total of zero dollars. That’s the fund that they look to, to ensure that epidemics locally don’t become pandemics globally. We have given zero dollars to that. So, I think we need to look internally. When we think about the failures of WHO or the weaknesses of it, it’s a reflection of our weaknesses of global leadership.

ROY: We’re witnessing the world’s richest country still failing to mount a systematic, coordinated health response to what is projected on to the worst mass casualty and humanitarian crisis in U.S. history. Sure, there are mistakes or missteps by a large bureaucracy that is the World Health Organization. But let me tell you, that is an organization that is full of experts who have been doing this type of work for years, if not decades[.]

In another briefing break-in, Todd pathetically wondered whether China ever “deceive[d] the WHO.”

Thanks to outlets like our friends at the Daily Wire and National Review, the real facts show otherwise with one major example being how the WHO insisted on January 14 that there was “no clear evidence of human-to-human transmission.”

In an April 7 editorial, National Review wrote that WHO director-general Tedros Adhanom Ghebreyesus was “so impressed” by China that, in late January, “he lauded Chinese authorities for ‘setting a new standard for outbreak control,’ praising their ‘openness for sharing information.’”

When Melber took the helm, he began by making clear that he would be siding with the WHO (and therefore China):

He’s arguing they were China-centric, and basically took China’s word on the virus in those early stages. The President, of course, has ignored his own recent activities, which is to say how he downplayed the virus, meaning what he’s accusing the WHO of, he did even worse. We have the public evidence of that.

Moments later, Melber ruled that the President’s evisceration of the WHO for working with China to deceive the world about the virus was “misleading” due to past Trump tweets praising China and WHO. In actuality, that did nothing to undercut Trump’s case and, it instead bolstered the argument that WHO acted with deception.

But instead, to bolster his pro-China stance, Melber brought in Dr. Nahid Bhadelia, who warned that punishing the WHO “is basically cutting off the global response to this pandemic at its knees.”

Melber then went on an extended commentary debasing himself as no more than a shrill for the WHO, before bringing on the WHO’s Lawrence Gostin for a segment that belonged on an actual propaganda channel like CGTN or RT (click “expand”):

We also know what life was like just a few months ago. Everyone remembers it. Trump was downplaying the threat. The Presidential primaries were in full bloom. People were living a normal life in America. We know behind the scenes, the State Department’s epidemiologist put warnings “that the coronavirus was likely spread[ing] across the globe”….So, as Trump attacks the WHO right now, what was that health organization actually doing in January? Let me show you. The WHO was publicly urging countries to prepare for containment, including active surveillance, early detection, isolation, case management and contact tracing. Why am I showing you this right now? Because you need to know the facts that while Donald Trump defunds the WHO and tries to blame them to distract from his own response, he is actually only calling attention to the fact that the WHO was ahead of President Trump.

We’re going over this history because the President, now the second day in a row, has hijacked the time to update everyone on the virus, to tell you the public information and security and public health information you need, he’s hijacked that time to defend his record to attack other people, in this case inaccurately attacking the WHO, which may not be a perfect organization above reproach, but happened to be ahead of him. Why do I say that? Because it was three more weeks after what I just showed you until the President did issue the first social distancing guidelines at the federal level on March 16th.

Similar to how PBS suggested over the years that defunding them would kill Big Bird (instead of their liberal news shows), Gostin warned that defunding the WHO would ensure that Africa and Latin America were ravaged by the virus, harm the global fight against AIDS and polio, and harm the mental health of people globally.

He added that their actions with respect to China made it “abundantly clear” that the world had to act sooner than they did to which Melber thanked WHO for their “good work.”

Gostin also ruled that Trump was “simply flat-out wrong” to suggest WHO didn’t sufficiently inform and prepare countries for what was to come and pulled all the right levers with China. 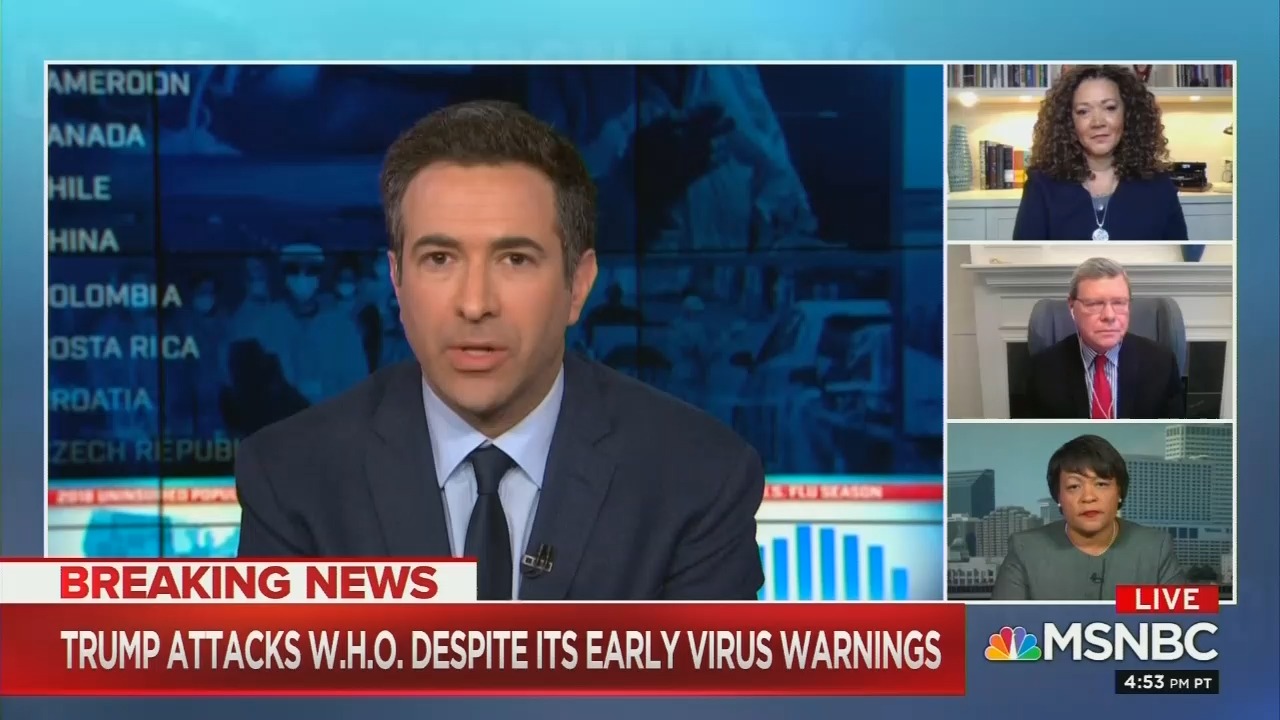 It was next that Melber lobbed this softball (to which Gostin answered in the affirmative): “In your view as an expert, does defunding and disentangling to whatever degree the United States from WHO right now, does that make it more likely that more people will catch this virus and die?”

Before the hour was out, Melber teed up New Orleans Mayor Latoya Cantrell (D) to hail the WHO and then faux conservative/liberal hack Charlie Sykes to defend the WHO and trash the calls to hold them accountable as “a meme…in conservative media.”

Because conserving conservatism means bending over backward for global organizations and funding them with hundreds of millions of dollars or something.