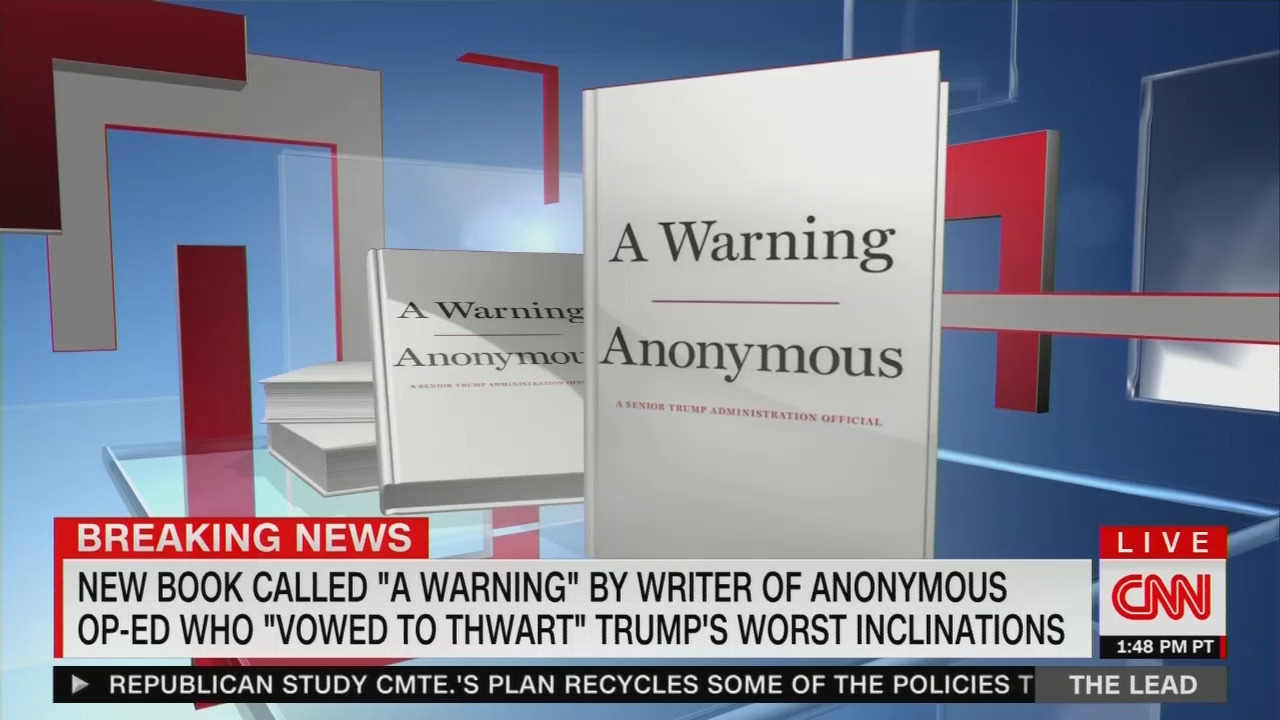 In a press release and subsequent article by the arrogant and biased Philip Rucker of The Washington Post, it was announced with much fanfare among the liberal media and elites that the self-righteous anonymous White House official behind that infamous New York Times op-ed will soon release a book about being a member of The Resistance.

Despite the fact that there’s no way for anyone other than The Times or the book publisher to vet them (plus the claims they’re leveling), the book will undoubtedly be celebrated as a modern-day Gospel by the liberal media. All the while, this person will be allowed to remain anonymous and thus take the coward route.

Quoting press agent Matt Latimer, Rucker explained that the author of A WARNING (yes, it’s all caps) turned down a seven-figure advance because the book isn’t for financial gain, but instead to be “an act of conscience and of duty, which is why the author refused any advance and is donating a substantial portion of any royalties to charities that protect those seeking the truth around the world.”

Yuck. So a book about being anonymous and why it’s a good thing the author is staying anonymous will financially benefit an industry (the WH beat) that operates almost entirely on anonymous sources. Neato!

It should be noted that Latimer wrote a smug tell-all of his own about being inside the Bush administration, which led to him being raked over the coals. One such former colleague was Bill McGurn, who penned a September 21, 2009 take down in The Wall Street Journal.

Years later, Latimer pathetically bolstered his Swamp credentials by asserting in a June 2015 Politico piece that “Scandals Only Make the Clintons Stronger” and this in 2014: “Hillary’s Wonderful Week: A Bush speechwriter proclaims: Her campaign lacked villains. Now she’s got a lot of them.”

Rewinding back to Rucker, his piece began by gloating (click “expand”):

The author of an anonymous column in the New York Times in 2018, who was identified as a senior Trump administration official acting as part of the “resistance” inside the government, has written a tell-all book to be published next month.

The book, titled, “A WARNING,” is being promoted as “an unprecedented behind-the-scenes portrait of the Trump presidency” that expands upon the Times column, which ricocheted around the world and stoked the president’s rage because of its devastating portrayal of Trump in office.

Rucker also gushed (like CNN and MSNBC did when the news broke) about its details and unprecedented nature (click “expand”):

The book will be published on Nov. 19 by Twelve, an imprint of Grand Central Publishing/Hachette Book Group. It comes at a treacherous period for Trump, as the House continues its fast-moving impeachment inquiry into the president’s alleged abuse of power.

The author is being represented by Matt Latimer and Keith Urbahn of Javelin, the same literary agents who represented fired FBI director James B. Comey and former White House aide Cliff Sims for their memoirs from their time in the Trump administration. The book was acquired by Sean Desmond, Twelve’s publisher.

There is no modern historical parallel for a firsthand account of a sitting president written in book form by an anonymous author. Many senior government officials, including some who served in the Trump administration, have written books under their own names. Many more have shared information with journalists on the condition of anonymity, perhaps most famously the official known as Deep Throat who was a key source for Bob Woodward and Carl Bernstein’s reporting in The Post on the Watergate scandal.

In a rather curt and sarcastic but astute statement, White House Press Secretary Stephanie Grisham reacted to news of the book by stating that it “takes a lot of conviction and bravery to write a whole book anonymously.”

On Twitter, Axios’s Jonathan Swan quipped: “Is this douchebag still quietly, oh so quietly, saving the republic? Spare us.” And Townhall’s Guy Benson asserted: “This feels really dishonorable, especially with the $ component. Step forward and resign. Don’t snipe from the shadows, remaining on the inside, profiting along the way.”