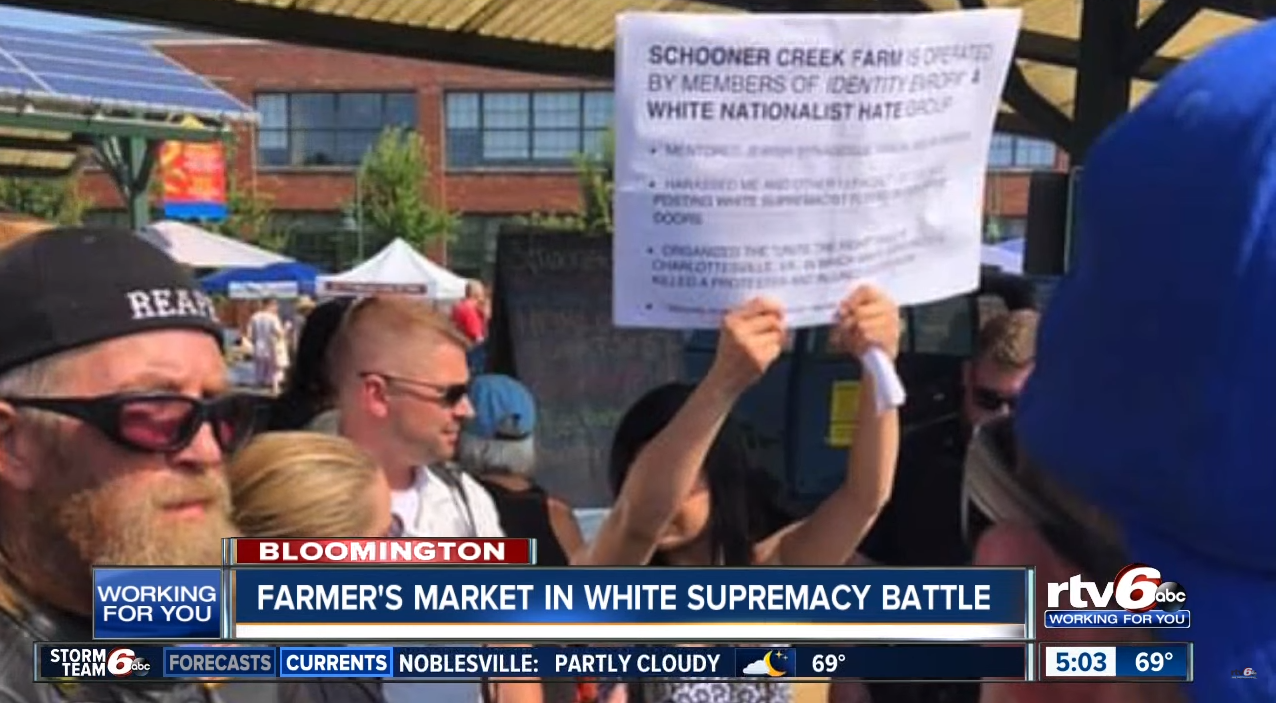 In a Monday front-page story “Amid the Kale and Corn, Fears of White Supremacy at the Farmers’ Market,” New York Times journalist Patrick Healy sounded the alarm about how the people at a farmer’s market in a “heavily white, liberal town of 85,000 that is home to Indiana University” have been fearing for their lives after it was discovered that a couple selling “tomatoes and kale were also white nationalists.”

Justin Williams was baking a tray of gluten-free seeded bread for the next morning’s farmers’ market when his phone buzzed. It was a friend who grows organic sprouts, nervously wondering if he should bring along a shotgun to market.

It has been a summer of fear, protest and tension in this crunchy college town ever since the popular Saturday morning farmers’ market was jolted by allegations that a husband and wife who had been longtime sellers of organic tomatoes and kale were also white nationalists.

The accusations exploded into public view after activists and online sleuths used federal court records and the leaked archives of a far-right message board to uncover a digital trail they say connects the couple who own Schooner Creek Farm to an organization that promotes white nationalism and “white American identity.”

The rumors of white supremacy amid the stalls of clover honey and sweet corn left farmers and shoppers reeling: Not even their seemingly placid farmers’ market was immune from the battles over extremism convulsing the country at a time of rising alarm over white supremacist violence.

He explained that people have “packed public meetings to debate whether” Sarah Dye and husband Douglas Mackey “should be asked to leave or allowed to stay,” to which Dye and Mackey have insisted that they’re not going anywhere and aren’t supremacists.

But amidst this liberal media-driven hysteria about white supremacists seemingly everywhere waiting to commit mass murder (despite there being no hard count of them nationwide), Bloomington residents are mortified of venturing out.

And, for good measure, concerns raised by the postings by Dye on what are clearly pro-white supremacist website were so bad that one weekend featured Antifa and another featured “armed members of a conservative militia group,” which is never a good sign in either case.

Healy explained that the meltdowns were so egregious that the “mayor suspended the market late last month over public safety concerns” and thus causing other vendors to financially suffer.

While the couple “deny being white supremacists, and say they keep their political beliefs out of the market,” there appeared to be something there with Dye posing as “Volkmom” on a chat board (click “expand”):

They have said on social media that they are being harassed, demonized and hounded out of the farmers’ market by left-wing activists because of “a handful of mildly pro-white comments.” They have not been accused of any wrongdoing or violence, and say they are the ones who have become victims of “the cult of the left.”

The farmers did not respond to questions about their beliefs or political activities, but Sarah Dye, one of Schooner Creek’s owners, told the Fox 59 television station in Indianapolis that “we absolutely reject supremacy.”

“I am disgusted at the level of lies, misinformation, falsehoods and intimidation by those who do not know me or my family,” she said. Ms. Dye referred to herself as “an identitarian,” which she described as a worldview that “emphasizes the importance of identity.”

The public outcry crystallized this spring after federal prosecutors filed a long sentencing document in a criminal case against Nolan Brewer, a 21-year-old man who idolized Nazis and pleaded guilty to a hate-crime charge for painting swastikas on a synagogue in Carmel, Ind.

Deep in the 200-page document was a 2018 F.B.I. interview in which Mr. Brewer briefly mentioned meeting with “Sarah and Douglas,” and reported that the woman had been posting as “Volkmom” on a chat board of Identity Evropa, which the Anti-Defamation League and the Southern Poverty Law Center call a white nationalist or white supremacist group. The group has since rebranded as the American Identity Movement.

Activists said they had found ties between the farm and the white nationalist group after scouring hundreds of chat messages posted by Volkmom and photos of a greenhouse and organic vegetables on her property. They began petitioning Bloomington to remove Schooner Creek from the market. 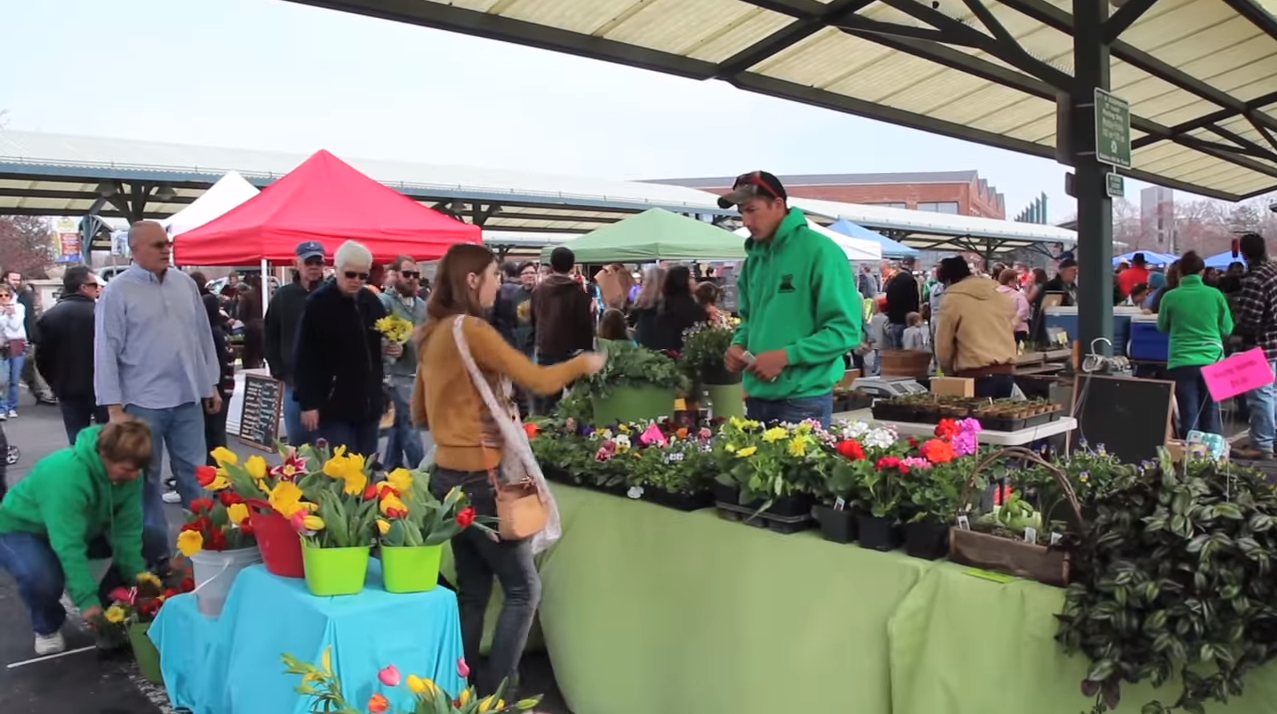 As Healy acknowledged, the city hasn’t banned them, alluding to how Dye and Hackey have “First Amendment rights to their personal views as participants in a city-run market, and said the farm did not appear to be breaking any written rules about how vendors should behave at the market.”

But by the end of the piece, Healy ran quotes from participants hoping things could “return to normal” with Schooner Creek keeping its stand (click “expand”):

Several farmers said they had lost money amid the unrest and just wanted the market to return to normal.

“Everybody has a right to their personal beliefs,” said Chris Hunter, who said she had sold honey since “forever” at the market. “I may not agree with their beliefs, but they’re still people.”

Little has been resolved, but the farmers’ market reopened Saturday, peacefully so far, with new security cameras and more police officers on hand.

“We can’t let it be hijacked by fear or hatred,” Mayor Hamilton said.