On Wednesday, CNN showcased yet again their unsavory penchant for gun control and confiscation without facts and knowing little about an arrest warrant gone wrong in Philadelphia that left six police officers hurt. Unfortunately, this behavior continued into Thursday with 19 minutes and 28 seconds of gun control lobbying in context of the incident during their first 12 hours of live programming.

And this was despite the fact that, according to police, the gunman had a long criminal record (including weapons charges) and thus, in all likelihood, shouldn’t have had such an arsenal. But for CNN, that didn’t matter along with the reality that, by default, criminals don’t follow laws.

For the parameters of this count, NewsBusters looked at CNN’s live coverage starting at 4:00 a.m. Eastern time with Early Start through the end of CNN Newsroom with Brooke Baldwin at 4:00 p.m. Eastern. This time count excluded teases and only included discussions of gun control either in context of the standoff or when it was used as a jumping off point.

Along with four teases on Early Start that lamented how the eight-hour standoff was an example of “more gun violence in a nation awaiting answers,” fill-in co-hosts Victor Blackwell and Alison Kosik took turns reading this news brief each half-hour during the two-hour show. Here’s one of those (click “expand”):

BLACKWELL: Now, in the wake of deadly massacres in El Paso and Dayton, Philadelphia's mayor now wants to know when is enough enough? 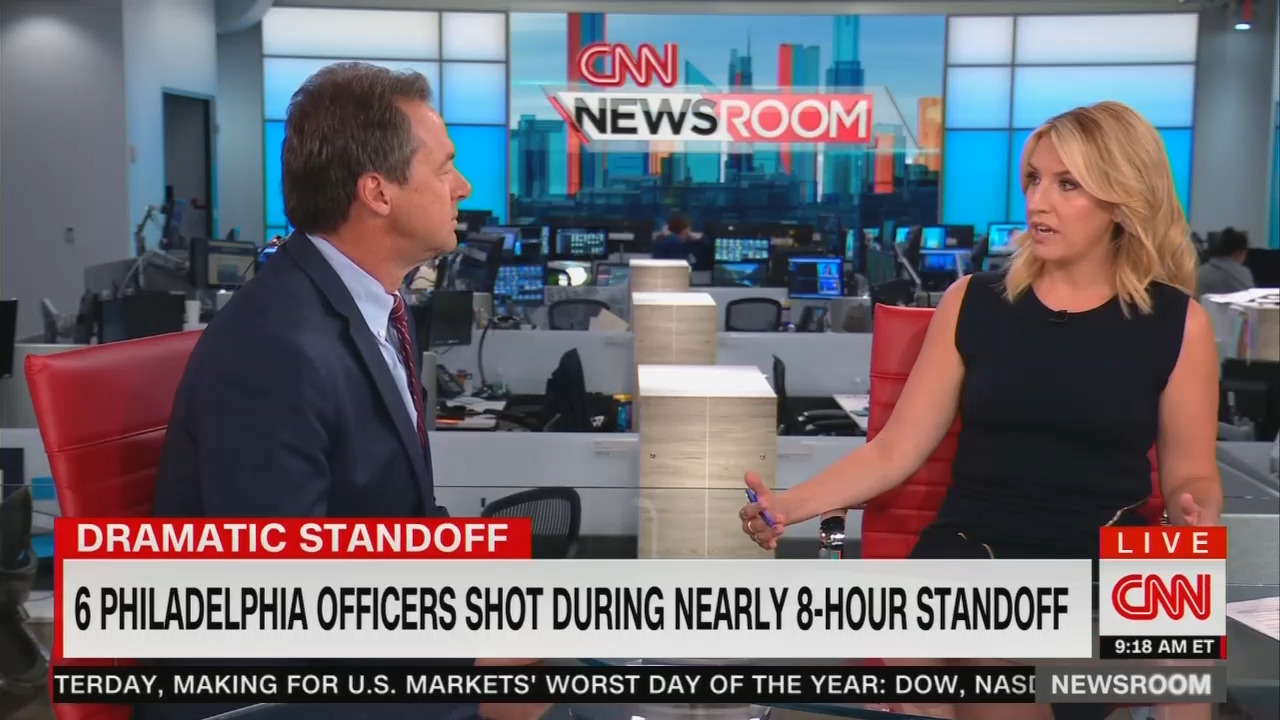 On the three-hour New Day, correspondent Athena Jones featured a similar soundbite in every hour about how Kenney was “expressing his frustration about gun violence” alongside the chyron “Breaking News; Mayor Calls for More Gun Control After Philly Shooting.”

CNN Newsroom with Poppy Harlow and Jim Sciutto included the most coverage about guns in context of Philadelphia to the tune of seven minutes and 59 seconds. Harlow used the injured officers to spend nearly four minutes on guns with Montana Governor and floundering 2020 Democrat Steve Bullock.

HARLOW: We saw what happened in Philadelphia overnight. Tragic, and that man was using an assault rifle. Do — I know you support a voluntary buy back program for assault weapons. What about a mandatory one? Cory Booker has talked about that. That would mean criminal prosecution to those who don't sell back their assault weapons. Is that going too far?

BULLOCK: There's going to be a lot of discussion about this. From my perspective, it is going too far.

HARLOW: Well, what do you think? Why?

BULLOCK: I think in part because part of the whole narrative of this — when I was growing up with the NRA, it was a gun safety and hunting organization. Now it really is a political organization. But the narrative for responsible gun owners that the federal government’s going to come in and take away all of your guns, I think that feeds that.

Prior to an interview talking about guns later in the hour with Congresswoman Chrissy Houlahan (D-PA), Harlow also brought on senior political analyst David Gergen to wax poetic about the lack of gun control making common places unsafe (which, as this space has repeatedly stated, is nonsense) (click “expand”):

HARLOW: I would like to turn the page to guns and gun violence in the wake of the tragedies in Dayton and in El Paso and the reporting we just had out of St. Louis and what we saw happen to those officers in Philadelphia last night. David Gergen, you just wrote about this. You just tweeted “Philadelphia shows us the waves of gun violence continue unabated. In two years time we are losing more Americans to gun violence than died in Vietnam.” So the President says he's going to do something and Mitch McConnell says this is front and center. Should we believe them?

GERGEN: Not very much. You know, the rhetoric is nice, but let's see the action and so far, we've seen very, very little action. The pattern we all know is a big shooting takes place, kids are killed, it spikes the interest in the country — it spikes very high, everybody’s very, very upset, we get promises from politicians, we get promises from the White House and then nothing really happens and until we deal with this in a serious way, we have more guns in this country than we have people. We have, you know, we’re one of the most blood thirsty nations on the Earth. Until we deal with that and we continue losing people, you know, we're going to raise a generation of kids who are scared to — to go outside, scared to go into their schools. Is that some kind of legacy?

Things didn’t improve with At This Hour as host Kate Bolduan focused on gun control with Governor Tom Wolf (D-PA). That said, she was the best CNN host at acknowledging the alleged suspect’s “extensive criminal history” and thus questions about whether he should have been allowed to have guns.

After no discussion of Philadelphia on Inside Politics, CNN Right Now picked that up as host Brianna Keilar trumpeted Kenney’s wishes for mass gun bans, claiming that “[t]he incident once again raising the questions about gun laws.” 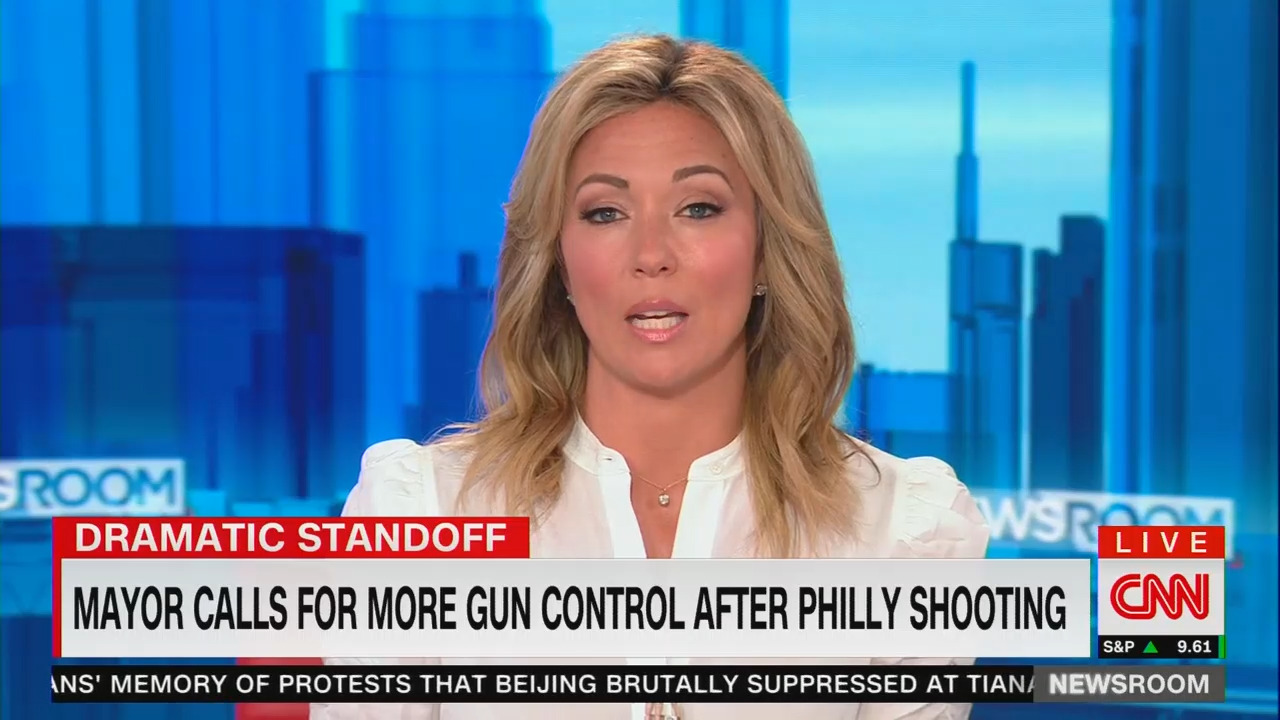 Sorry not sorry, Brianna, but the only ones “raising....questions” are fact-free liberal politicians and their allies in the media with an aversion to the Second Amendment. It’s that simple.

And during Brooke Baldwin’s show, she featured a live press conference by the City of Philadelphia spotlighted by a lengthy rant from Kenney about how “[n]o one should have access to the kind of weaponry and firepower that we saw in north Philadelphia” and he was unable to tell city faith leaders that the city can’t enact the same levels of gun control that Congress can.

To close out her show, Baldwin made sure to again pass along Kenney’s plea:

Also, the Philadelphia Mayor Jim Kenney spoke, reiterating a point he had made last night, something that is got to give on guns. He called on state officials to either step up or step aside and let cities like Philadelphia enact their own solutions.