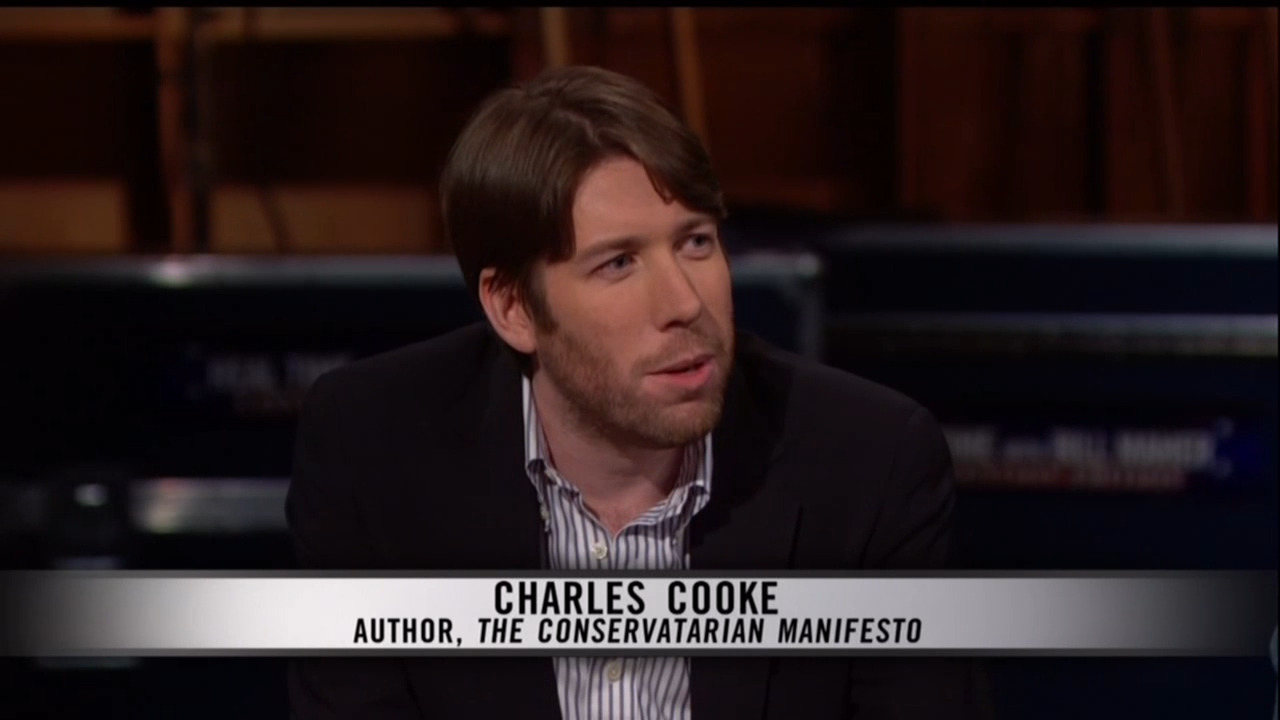 For the latest print issue of National Review dated February 11, editor Charles C.W. Cooke offered one of the best eviscerations ever of the liberal media for their odious behavior, declaring them to be “[v]ain, languid, excitable, morbid, duplicitous, cheap, insular, mawkish, and possessed of a chronic self-obsession that would have made Dorian Gray blush” led by people like CNN’s Jim Acosta acting like “a member of the cast of Hamilton.”

Our national press is a national joke. Vain, languid, excitable, morbid, duplicitous, cheap, insular, mawkish, and possessed of a chronic self-obsession that would have made Dorian Gray blush, it rambles around the United States in neon pants, demanding congratulation for its travails. Not since Florence Foster Jenkins have Americans been treated to such an excruciating example of self-delusion. The most vocal among the press corps’ ranks cast themselves openly as “firefighters” when, at worst, they are pyromaniacs and, at best, they are obsequious asbestos salesmen.

He emphasized that this problem is “getting worse” seeing has how the liberal media still haven’t come to grips with why the American people rejected their world view in 2016. By refusing to look themselves in the mirror, Cooke observed that the Trump presidency “has been an unmitigated disaster for the political media.”

In turn, the press have “treated his presidency as a rolling opportunity for high-octane drama, smug self-aggrandizement, and habitual sloth” where “explosive, unsourced reports” are “the modus operandi.”

After a hilarious hypothetical story about the President having killed Leon Trotsky in 1940 (six years before he was born), the National Review editor used that to make a broader point and promptly took glorified CNN PR agent Brian Stelter to the cleaners (click “expand”):

Everyone, that is, but the victim of the frenzy — who is usually Donald Trump but might also be Brett Kavanaugh or Nikki Haley or Ben Shapiro or a county comptroller from Arkansas or the children of Covington High School or someone who just happens to share a name with a school shooter and once complained online about his property taxes — who will complain bitterly about the spectacle and then be condescended to on the weekend shows by professional media apologists such as CNN’s Brian Stelter.

This phase is the final one within the cycle, and it may also be the most pernicious, for it is here that it is made clear to the architects of the screw-up at hand that they should expect no internal policing or pressure from their peers and that, on the contrary, they should think of themselves as equals to Lewis and Clark. To watch Stelter’s show, Reliable Sources, after a reporting debacle is to watch a master class in whataboutism and faux-persecution, followed by the insistence that even the most egregious lapses in judgment or professionalism are to be expected from time to time and that we should actually be worrying about the real victim here: the media’s reputation. This, suffice it to say, is not helpful. Were a football commentator to worry aloud that a team’s ten straight losses might lead some to think they weren’t any good — and then to cast any criticisms as an attack on sports per se — he would be laughed out of the announcers’ box.

When it comes to the media’s repeated mistakes, Cooke noted for the Stelters of the world that “‘[a]ccountability’ doesn’t mean ‘always running a retraction when you get it wrong” but rather “learning and adapting and changing one’s approach.”

Instead, the political media have shown an undeniably arrogant tendency to both view themselves and demand others see them as “the very embodiment of liberty.”

That, certainly, is how they regard themselves. “The last person to rule America who didn’t believe in the First Amendment was King George III,” wrote MSNBC’s Kasie Hunt, back in June — which is true only if you discount that the colonists actually enjoyed robust speech protections relative to their English cousins; if you are insensible of the Alien and Sedition Acts of 1798, the pro-slavery “gag” rules that bound the House of Representatives from 1835 to 1844, the Civil War, the Espionage Act of 1917, the Sedition Act of 1918, New York Times Co. v. United States, Woodrow Wilson, Charles Schenck, or Eugene Debs; and, most crucially, if you remain wholly incapable of distinguishing between criticism and restriction.

Cooke did take issue with the President’s rhetoric and tactics, but nothing more because, as he accurately explained, Trump “has not — ever — ‘attacked the free press’; he has not prevented, or attempted to prevent, the publication of a single printed word; and he has made no attempt whatsoever to change the law that he might do so.”

He continued and arrived at Acosta’s showboating (click “expand” and emphasis mine):

If the media understand this difference, they are doing an excellent job pretending otherwise. In complaint after complaint, the “press” and “the First Amendment” are held to be synonymous when they are no such thing and cannot logically be so. Thomas Jefferson, who was as reliable a critic of suppression as the early republic played host to, wrote famously that if it were left to him “to decide whether we should have a government without newspapers, or newspapers without a government, I should not hesitate a moment to prefer the latter.” And yet he also contended that “nothing can now be believed which is seen in a newspaper.” This represented no contradiction whatsoever. One can believe simultaneously that the press must remain free and that it has built itself into an ersatz clerisy that regards its primary job not as conveying information in as effective a manner as possible but as translating writs for the benighted public, the better to save its soul. If the polls are to be believed, a majority of Americans believes exactly this.

And why wouldn’t they, when it’s made so obvious? Last year, when the White House unveiled an immigration change that it hoped to persuade Congress to pass, CNN’s Jim Acosta showed up in the press room with an indignant look on his face and began to recite poetry from the stalls. It is true that Acosta, a man who seems unable to decide whether he’s a political correspondent on basic cable or a member of the cast of Hamilton, is particularly absurd. But he is by no means an aberration. It is for a good reason that one cannot imagine a member of the mainstream press behaving toward a Democratic administration in the manner that Acosta behaves, and the reason is that he’d never think to do so against his own team.

Sometimes consciously, but most often unwittingly, journalists treat Democrats as normal and Republicans as abnormal and proceed accordingly in their coverage.

Another sign of the media’s degrading worthiness of being considered serious? How about the constant hyperventilation in the press about things being “unprecedented” with American divisions growing and institutions eroding. In other words, it’s never-ending rendition of Chicken Little.

Selective political interest is disastrous in its own right. But when combined with the catastrophic historical illiteracy that is rife among the journalistic class, its result is what might best be described as the everything-happening-now-is-new fallacy, which leads almost everybody on cable news and the opinion pages to deem every moment of national irritation unprecedented, to cast all political fights as novel crises, and, provided it is being run by Republicans, to determine that the present Congress is “the worst ever.” Turn on the television and you will learn that our language is the “least civil,” our politics is “the most divided,” and our environment is the “most dangerous.” When a Democrat is president, he is “facing opposition of the kind that no president has had to suffer”; when a Republican is president, he is held to be badly unlike the previous ones, who were, in turn, regarded as a departure from their predecessors. Continually, we are held to be on the verge of descending into anarchy or reinstituting Jim Crow or murdering the marginalized or, a particular favorite of mine, establishing the regime outlined in The Handmaid’s Tale. Past is prologue, context, and balm. Without it, all is panic.

Which brings us to the press’s most infuriating habit: its selective defense of American institutions. On cable news, on the New York Times editorial pages, at the many black-tie galas that the media like to hold for themselves, the word is deployed as a cudgel. “Institution.” “Institution.” “Institution.” At least . . . until it’s not. Institutions matter until the Supreme Court rules in a way that annoys the editors of the Huffington Post, who immediately cast the same judges who yesterday were beyond reproach as “illegitimate” or “corrupt” or too male or too white or too Catholic or too rich or too mean....Institutions matter until Donald Trump wins an election, and then the entire system needs junking and is probably being run by the Russians anyway. Institutions matter until the Senate is deemed an obstacle to progress, or the House disagrees with the president, or the wrong team is making demands[.]

In the words of Cooke, the liberal media’s attempts to diagnose the President with Alzheimer’s and other health problems represented “the most extraordinarily unethical frenzy in recent memory.”