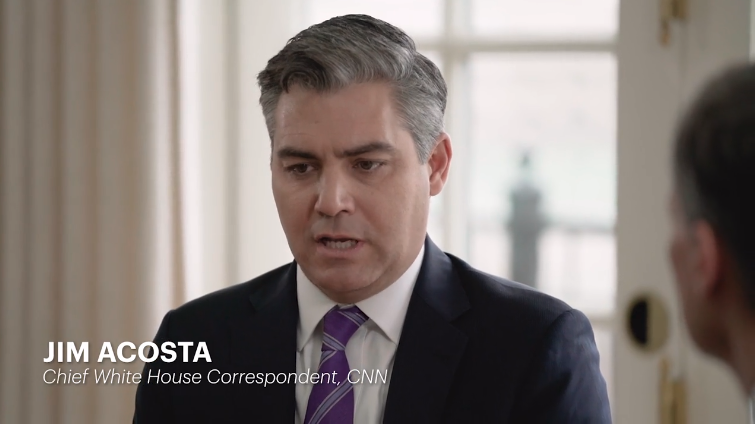 To put it objectively, CNN chief White House correspondent Jim Acosta had quite the 2018. Whether he was throwing temper tantrums in White House briefings over CNN’s issue of the day or not being called on, 2018 saw Acosta become a hate object of sorts and a broader symbol of how much CNN loves CNN.

For a year that began with him tussling with Press Secretary Sarah Huckabee Sanders and ended with the controversy in which he briefly lost his press pass, here are the ten craziest Acosta moments. They’re presented in chronological order with links to their original NewsBusters articles (with the exception of #5 and #10).

1. CNN's Acosta: It Will Take ‘Dead Journalists on the Highway’ To Shake Off Trump ‘Spell’

One of the first Trump controversies of 2018 was the President’s use of the term “shithole countries.” Apparently, this gave CNN the greenlight to not only use that word almost 200 times in a day, but go even further with their expletives.

On the January 11 Situation Room, Acosta declared that Trump’s comments bolstered the argument that he’s a “racist” by “inject[ing] a lot of poison into the debate over immigration.” Acosta added that “the President seems to harbor racist feelings about people of color from other parts of the world.”

Twelve days after the shooting at Marjory Stoneman Douglas High School in Parkland, Florida, Acosta seemed to have gotten his talking points from gun control groups when he told Sanders on February 26 that there’s a fear that schools will become the new “wild west” if there are more adults in schools who carry guns to protect their students:

There are a lot of parents who are worried that if you have a lot of people inside these schools with weapons, that this could turn into a situation like the wild west. What would you say to parents out there who are worried about faculty members, coaches, administrators, packing heat in school.

On April 24, Variety came out with a profile of not only Acosta, but fellow White House beat reporters April Ryan of American Urban Radio Networks and Ashley Parker of The Washington Post ahead of the White House Correspondents Dinner. As expected, the first two made it largely about themselves and showed now little they think of the general public.

In Acosta’s case, he ruled that the toughness displayed by Sanders and predecessor Sean Spicer has all been “an act” and the American people “don’t have all their faculties” to understand that.

Acosta also told the entertainment magazine that the White House should be forced “to take a hard look in the mirror” if and when a journalist is hurt “because of rhetoric coming from the President of the United States” as that will signal that “we have suddenly become something less than the United States.” Acosta claimed he was being taken out of context, but the facts speak for themselves.

4. Sanders Torpedoes Acosta for His ‘Unnecessary’ ‘Tone’ in Press Briefings; ‘I’m Finished With You’

That same day, Acosta and Sanders went toe-to-toe in the White House Briefing Room. What began as an exchange about then-VA Secretary nominee Ronny Jackson morphed into a tussle over Acosta’s Variety item.

Acosta then decided it was worth badgering Sanders about whether “this administration is a champion of the free press.” Sander decided enough was enough, informing him that she still takes “your questions in a tone that's completely unnecessary, unneeded and frankly doesn't help further the conversation or help the American people get any more information in a better way, which is your job and my job and that's what I'm trying to do.”

The CNN carnival barker tried to continue, but Sanders informed him: “I’m finished with you.”

Acosta had a fun summer when he was mercilessly heckled at Trump rallies in South Carolina on June 25 and then in Florida on July 31.

In the first incident, the crowd chanted “go him, Jim” and “fake news Jim.” Instead of plowing onward, Acosta decided he’d show them who’s boss, insisting on CNN that “we are here to do our jobs.” He also chided the crowd by insisting that “not all of the people in this crowd...treated us with that level of civility that we all think that Americans should be entitled to across this country.”

Just over a month later in the Sunshine State, the same situation unfolded and, behaving as if he’s in the Avengers, Acosta told Wolf Blitzer that “we’re not going home” even though the crowd chanted “CNN sucks,” which Acosta made sure to state was “false.”

6. CNN’s Jim Acosta Defends His Antics: I’ll Be ‘Shouting at the Devil’

Acosta appeared alongside fellow liberal media cheerleader Brian Stelter on the latter’s July 1 edition of Reliable Sources to bask in his methods of attention-seeking, going as far as to inform Stelter that, if he were to end up in Hell, he would “still be shouting at the Devil.”

As for his reputation among many Americans, Acosta dismissed the image people have of him by blaming Fox News host Sean Hannity, which Stelter obviously agreed with as a central theme of Reliable Sources is to denigrate Fox News.

7. Acosta: ‘We Weren’t In America Anymore’ With Trump Supporters

Following that July 31 rally in which Acosta was heckled, liberal media colleagues rushed to his defense with Ryan even suggesting that his life was in danger.

A day later, Acosta appeared with CNN conservatarian S.E. Cupp’s show (when it was on HLN and actually worth watching), trashing Trump supporters: “Honestly, it felt like we weren't in America anymore. I don't know how to put it any more plainly than that.”

Acosta explained that “Americans should not be treating their fellow Americans in this way, but unfortunately” this behavior “has been building for some time since the campaign.”

Showing how little CNN believes in self-reflection, Acosta lectured to Cupp’s approval that Trump supporters are shaped not by CNN but “by what they see in the primetime hours of Fox News and what they hear from some conservative news outlets” that “pit[s]...American against American and honestly, it needs to stop.”

Two days after his feelings were hurt at a Trump rally, Acosta responded to his August 2 briefing room brawl with Sanders by suggesting on CNN Newsroom that he’s “tired of this” “un-American” rhetoric from the administration of criticizing the press.

But just how upset was our friend Jim? Well, he even quipped that the press corps should “make some bumper stickers” and “buttons” so they can hold a protest outside the White House. Ah, so you’re equating yourself to far-left groups, Jim? Good to know.

9. Acosta Lashes Out at Trump, Blames Conservative Media for False Portrayal of Him

The CNN correspondent was given a hero’s welcome on August 8's The Late Show, lamenting to sympathetic CBS host Stephen Colbert that “conservative outlets” and “websites” have created “twisted and warped” views of him. It’s clear that Acosta was in his element.

A day after the 2018 midterm elections, the President followed predecessors in holding a post-election press conference at the White House and, boy, were there fireworks.

The exchange that will live on with infamy (or nostalgia) was the President lashing out at Acosta as a “rude,” “horrible” and “terrible person” who should stop and let him “run the country.” And, of course, there was the microphone-grabbing incident.

After the presser and before the White House yanked his pass (which he regained thanks to a court fight), Acosta was brought on as he, his CNN colleagues, and an official CNN statement stood up for poor Jim. Hours later, he lost his press pass until November 16 when a federal judge ruled for CNN.