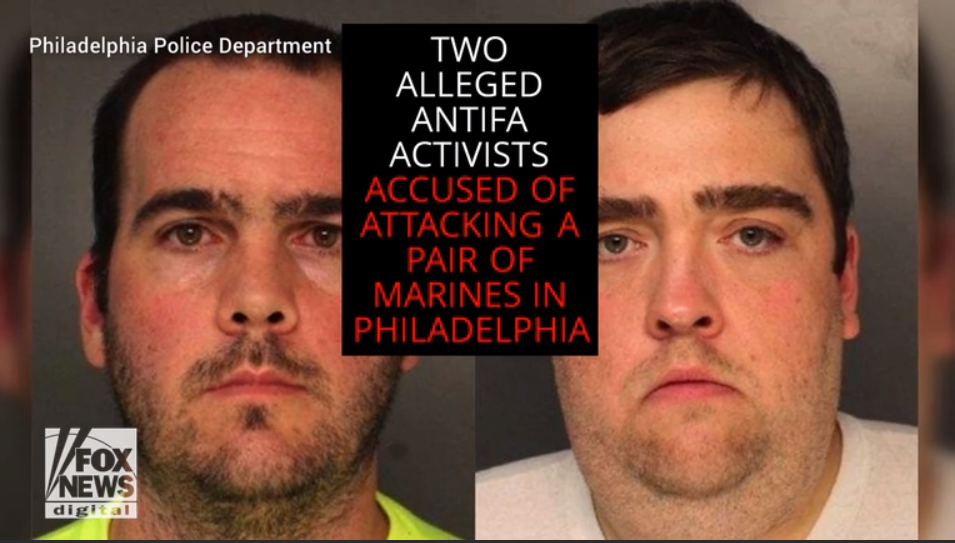 Last week, U.S. Marines Alejandro Godinez and Luis Torres appeared in full uniform at a Philadelphia courtroom to recount a disturbing series of events from November 17th when the two were beaten in the Old City section by Antifa members as the far-left mob falsely thought they were there for a Proud Boys event known as “We the People.”

The “big three” broadcast networks of ABC, CBS, and NBC saw no interest in covering this despicable act and the subsequent trial for two Antifa members on their morning and evening newscasts, nor did  Univision or Telemundo.

NewsBusters conducted this mini-study using Nexis searches of “Antifa,” “Marines,” “Philadelphia,” and then the names of the two Marines (Alejandro Godinez and Luis Torres) and the suspects (Tom Keenan and Thomas Massey), along with a corresponding Spanish-language search.

Philadelphia Magazine has been all over this story, so here’s part of what Victor Fiorillo wrote on December 13 (click “expand”):

Nearly one month after we told you that two U.S. Marines Corps reservists said they were attacked in Old City on November 17th near the controversial “We the People” rally, the two suspects and their accusers appeared in a Philadelphia courtroom on Thursday morning.

The Marines, Alejandro Godinez and Luis Torres, both testified in uniform about the incident, while three Marine officers, including their commanding officer, stood in the gallery. The suspects, Thomas Massey and Tom Keenan, who have been linked to antifa on websites and social media, sat together with their individual lawyers and did not speak.

The Marines, who are not from the Philadelphia area, said that they had traveled to the city with other members of their helicopter unit, headquartered at Fort Dix, to attend a Marine event that night at a local hotel ballroom. They said that they had no knowledge of the nearby rally, which drew members of the alt-right as well as a large number of counter-protestors, Keenan and Massey reportedly among them.

In a statement previously released to Philly Mag, Godinez identified the group as an “antifa mob” and said “we were outnumbered … there were two Marines against 10 to 12 assailants.”

The Marines were doing some run-of-the-mill sightseeing in the city when they were approached by the suspects and asked about whether they were “proud” (as in members of the Proud Boys). When Godinez stated “We Are Marines,” Kennan asked Godinez and Torres: “Are you Proud Boys?”

Sometime soon after that, Fiorillo relayed that “Keenan, Massey, and approximately ten other people — men and women, some masked and some unmasked — then began attacking them with mace, punches, and kicks, and calling them ‘nazis’ and ‘white supremacists.’”

Godinez pleaded for them to stop by pointing out that he’s Mexican-American, but the Antifa mob responded by calling him a “spic” and “wetback.” Godinez also testified that he “was maced at least six times, hit in the head, and kicked in the ribs, and he said that while he was being ‘stomped,’ members of the group....chanted ‘fuck him up’ over and over again.”

Later in the piece, Fiorillo concluded with news that “both men would be held for trial on aggravated assault and conspiracy charges — both felonies — as well as several misdemeanors” with Keenan being leveled “a felony charge of ethnic intimidation.” The Antifa members are due back in court on December 27th.

Since then, there’s been a litany of ludicrous stories that the liberal media have given oxygen to. At NewsBusters, we’ve covered a few of them, including network puff pieces that celebrated the transgender person who competed in Sunday’s Miss Universe pageant despite being a biological male and also hyping celebrity pleas to boycott the Super Bowl to support Colin Kaepernick.

And on the policy front, one such example was the networks going all-out to not cover a federal judge’s ruling late last week against ObamaCare, but instead fretting about its future.

All were topics that fetched airtime on the networks, but nothing about two men who serve our country allegedly being savagely beaten by Antifa, including a disturbing Hispanic angle that one would think networks like Univision and Telemundo would also want to inform their viewers about. But then again, as we’ve seen with NBC’s Chuck Todd or over on cable, Antifa has been a group that’s either celebrated or downplayed in the liberal media, including the case of Fox News Channel host Tucker Carlson's house coming under assault.

UPDATED on Dec. 21 to include Univision and Telemundo.