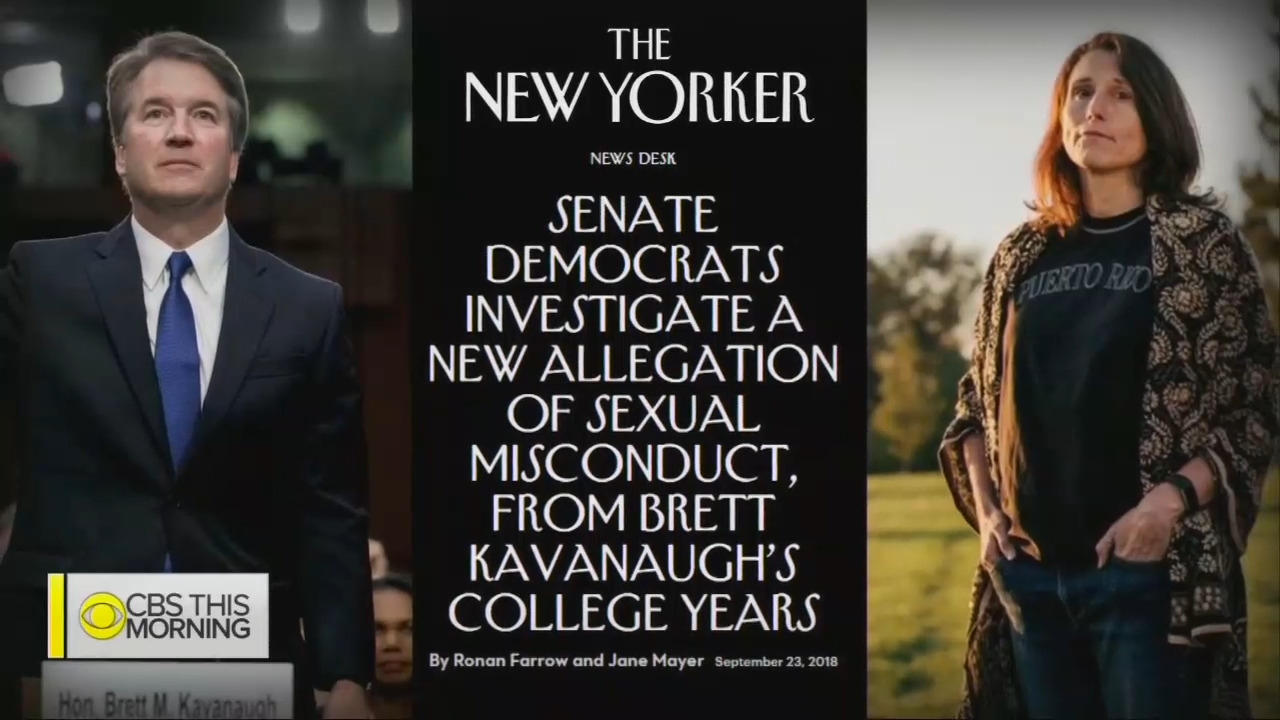 With the liberal media in a frenzy thanks to The New Yorker’s contribution Sunday night in the campaign to smear and stop Supreme Court nominee Brett Kavanaugh, it was rather amusing to see how not only did a slew of fellow liberal media outlets pursue but not publish Deborah Ramirez’s claim, but The New York Times admit to coming up empty in the facts department.

The problem with The Times admission? It came in paragraph 16 out of 34 in the dispatch “Christine Blasey Ford Reaches Deal to Testify at Kavanaugh Hearing” for Monday’s paper by Sheryl Gay Stolberg and Nicholas Fandos.

The piece wound through the weekend developments concerning Thursday’s scheduled hearing featuring Kavanaugh accuser Dr. Christine Blasey Ford, the possible pitfalls for Republicans (as if Democrats could do no wrong), and how reports of Kavanaugh possessing calendars from the alleged time in question could mean little in proving his innocence. Yes, really.

Eventually, Stolberg and Fandos arrived at the Ramirez claim and The New Yorker story in paragraph 14 with news about their own attempts to report it two graphs later:

The Times had interviewed several dozen people over the past week in an attempt to corroborate her story, and could find no one with firsthand knowledge. Ms. Ramirez herself contacted former Yale classmates asking if they recalled the incident and told some of them that she could not be certain Mr. Kavanaugh was the one who exposed himself.

Turns out, The Times wasn’t the only outlet chasing The New Yorker. According to Yashar Ali, NBC News and The Washington Post were also on the case, but Ramirez chose to speak to The New Yorker.

Monday morning spin from The New Yorker’s Ronan Farrow and The Washington Post’s Erik Wemple sought to throw cold water on Ramirez’s wobbly claim by citing Ramirez’s decision to give The New Yorker an exclusive interview.

Under pressure from their far-left audience, New York Times Executive Editor Dean Baquet sought to suck up to Farrow by telling Wemple: “I gather some people thought we were trying to knock down her account, but that’s not what we were doing. I’m not questioning their story. We’ve been competing against Ronan Farrow for a year and he’s terrific.”

While all that may be the case, that still doesn’t change the fact that The Times “interviewed several dozen people....in an attempt to corroborate [Ramirez’s] story” alleging Kavanaugh exposed himself, but were unsuccessful in finding people to back her up. And that, folks, is why you don’t publish a story; if you don’t have evidence to support your thesis, you don’t go through with it.

Here’s what they wrote (click “expand” to read more):

In her initial conversations with The New Yorker, she was reluctant to characterize Kavanaugh’s role in the alleged incident with certainty. After six days of carefully assessing her memories and consulting with her attorney, Ramirez said that she felt confident enough of her recollections to say that she remembers Kavanaugh had exposed himself at a drunken dormitory party, thrust his penis in her face, and caused her to touch it without her consent as she pushed him away. Ramirez is now calling for the F.B.I. to investigate Kavanaugh’s role in the incident. “I would think an F.B.I. investigation would be warranted,” she said.

The New Yorker has not confirmed with other eyewitnesses that Kavanaugh was present at the party. The magazine contacted several dozen classmates of Ramirez and Kavanaugh regarding the incident. Many did not respond to interview requests; others declined to comment, or said they did not attend or remember the party.

The editors of National Review put it plainly just after midnight (click “expand” to read more):

The only other corroboration is an unidentified classmate who tells the magazine that he heard of the incident afterwards — in other words, more hearsay.

Clearly, the opposition to Kavanaugh hopes that the two stories — with perhaps more on the way — will support each other despite their inherent weakness. If Democrats take down Kavanaugh on the basis of these charges, they will have achieved the miraculous by stopping a Supreme Court nominee with two unproven and probably unprovable charges, in a smashing victory for garbage-pail politics.

Brett Kavanaugh is an excellent jurist who has earned his sterling reputation over decades of public service. If his career is going to be ruined and his reputation besmirched, it should require clear and convincing evidence. We are willing to follow the facts wherever they lead, but so far, they lead only to the belief that this is a disgraceful episode that makes Borking look above-board and responsible by comparison.

If Republicans surrender on the basis of what we know now, they will face the fury of their own voters — and rightly so.

Also at National Review, Charles C.W. Cooke published a short but devastating takedown of The New Yorker piece. He went through it and quoted the key Times footnote before concluding (click “expand” to read more):

Which is to say that there is as much corroboration behind this accusation as there was behind the last one: None. In and of itself, this makes The New Yorker’s story irresponsible, albeit not out of character for Jane Mayer. But when one considers that the forces arrayed against Kavanaugh’s nomination have taken to arguing that the mere existence of an unsubstantiated allegation should be sufficient to cause a withdrawal . . . well, it looks reckless beyond all reason.

Which may, of course, have been exactly the point.