Speaking near the end of FNC’s Hannity on Thursday about the latest examples of liberal media bias, former White House press secretaries Ari Fleischer and Sean Spicer eviscerated the liberal press for having “becom[e] the voice of the opposition” to the point that “they’ve made it personal” against the President with CNN hosts in particular morphing into Chris Matthews clones.

Fleischer noted that the “curse of The New York Times” is that they’re gaining subscribers thanks to people being “so oppositional to Donald Trump” that, while they claim they’re not the opposition, they’re “becoming the voice of the opposition.”

“Newspapers, the media cannot be oppositional. They have to be factual and that's what's gotten lost,” he added.

Hannity asked Spicer in Trumpian fashion about the ratings on CNN and MSNBC suffering due to their anti-Trump slant while conceding that “if I was watching a President give a speech and they were chanting ‘Fox News sucks,’ I'd be, I might take it seriously after a while.”

Spicer correctly pointed out how CNN did a lot to promote Trump’s candidacy but, once he was elected, the Jeffrey Zucker-led network went berserk with one example being January 11, 2017 “when Jim Acosta decided to become a carnival barker.”

The former Trump aide then ended the segment with this mic-drop on CNN journalists acting like one of MSNBC’s most notorious pundit:

[T]hey decided to change their entire model and realized that their model is not to try to follow MSNBC and become the other resistance. And I think it's sad because they've made it personal and their ratings are suffering because of it and I think that they've gotten now every one of these hosts goes on air and tries to outdo themselves as if Chris Matthews has become the model for them.

Fleischer also interjected before commercial break: “Yeah and the problem is the press’s job is not to be resistance, but they enjoy that role, they relish it and they always do it to Republicans and they particularly do it to Trump and it's going to get worse even when Trump’s gone.”

Earlier, the pair discussed the media’s gloating over the North Korean’s possible withdrawal from the scheduled June 12 summit in Singapore.

Hannity observed that this was a case where Trump “has to fail” for the liberal media “to be happy.”

To see the relevant transcript from FNC’s Hannity on May 16, click “expand.” 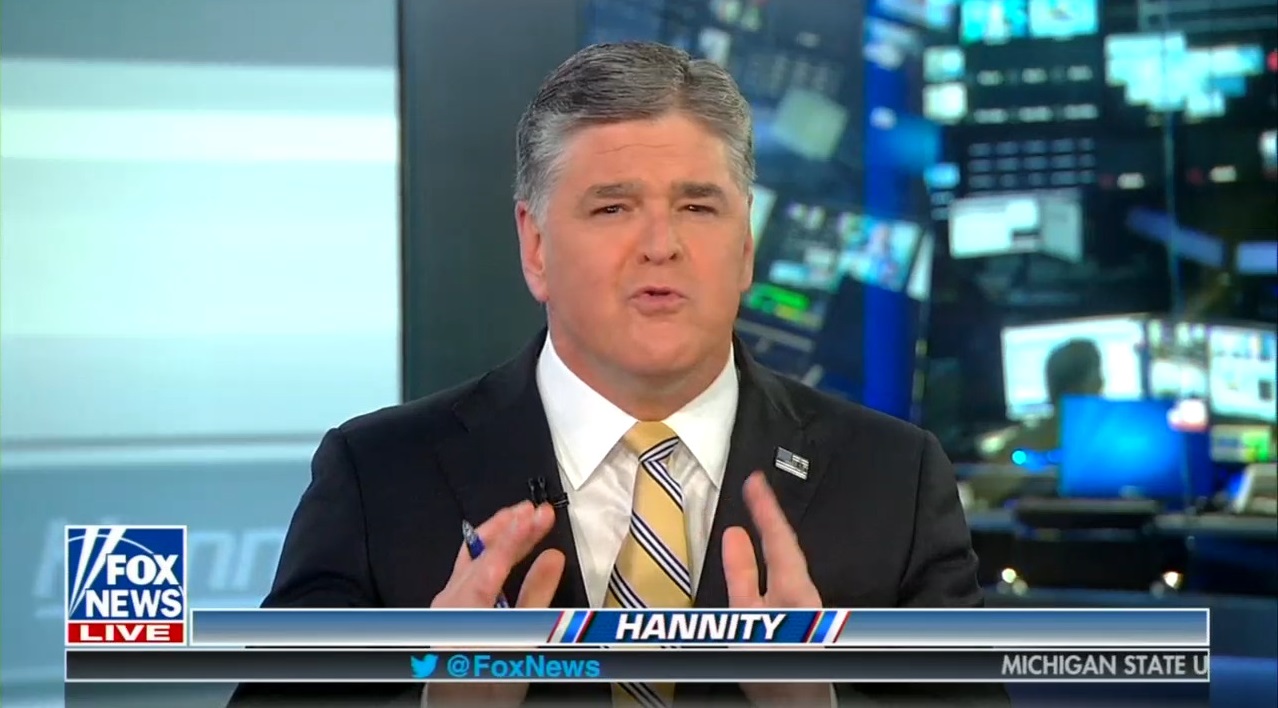 SEAN HANNITY: Alright. So members of the mainstream media they have been almost giddy, gloating news. North Korea is threatening to pull out of the summit in Singapore. Here's some examples.

ANDREA MITCHELL [on MSNBC’s MTP Daily, 05/15/18]: This was utterly predictable once the president was so eager to accept the terms before the terms were even spelled out.

WOLF BLITZER [on CNN’s The Situation Room, 05/15/18]: Did President Trump, do you believe made a mistake with his optimism about his upcoming summit with Kim Jong-un?

MIKA BRZEZINSKI: In this case, it's Kim Jong-un holding back that football.

BRZEZINSKI: And President Trump, not Charlie Brown, left swinging in the air.

SCARBOROUGH: — done it so many times before.

BRZEZINSKI: As it has happened so many times before. North Korea has done a 180.

SCARBOROUGH: Donald Trump, as Gordon said, has had his nose rubbed in it by the Chinese, by the North Koreans.

JAKE TAPPER: After North Korea threatened to withdraw from talks, President Trump is trying to manage expectations saying of the potential summit, may it will happen, maybe it won't. But North Korea experts say, based on prior actions, the White House should have seen this coming.

HANNITY: Alright. Big surprise. What they don't report is that President Trump, he gave up nothing for the release of the three hostages. Thankfully, they're home from North Korea. Kim Jong-un, well, he needs the summit to happen more than the U.S. Here with reaction, author of the upcoming book The Briefing, former White House Press Secretary Sean Spicer is with us, and former White House Press Secretary, Fox News contributor Ari Fleischer. It's a sad position for Democrats to be in. All these 14 record states on low unemployment, all these different demographics on low unemployment records, you know, the President, North Korea is a great thing. For them to be happy, he has to fail.

ARI FLEISCHER: Well, that's all true. But Sean, I have a surprising conclusion how bad it is with the press. It's actually good for Republicans because the press is so separating itself from the American people, particularly in the battleground states, that the Democrats read their good favorable press clips. They read the vehement anti-vitriolic Trump clips and they believe them and the more they believe the good press they're getting, the more they separate themselves from the voters. The press has separated themselves from the American people. So you have a slice left that believes the press.

HANNITY: You might be the last press secretary that ever had a chance at that job. I mean, I watch our friend Sean Spicer who did — Sean, I don't know how you did that job. They can't pay number enough and Sarah Huckabee is amazing. She has the patience of Job. I could not do the job that you two have done.

SEAN SPICER: The wounds are finally starting to heal. I would agree with — can I just say something on North Korea though?

SPICER: The funny part is, all those clips forget what the President said at the beginning which is, if we get a deal, great. I might walk out. He laid the predicate for this a long time ago and everybody is forgetting how he approached this to begin with. That's the important thing. The President has made very clear that he's willing to meet with him but he's willing to walk away from the table. That's what all of these people in their reports have forgotten and you're absolutely right. He's gotten Kim Jong-un to give three American hostages back, he's gotten him to start talking about denuclearizing the Korea Peninsula. Unemployment’s at a record low. So many millions of Americans are benefitting and they are doing whatever they can to figure out what negative news to cover because at the end of the day, what's so fascinating is, most Americans are saying you know what? This President is keeping his promise as he's getting things done and America is better country before it. So I know for a lot of folks in the press corps, they're trying to figure where else can I find, what can I go after him on? But at the end of the day, Ari’s right. They continue to show how wildly out of touch they are with the American people because the President is getting results both domestically and foreign policy-wise he's keeping the country safe, he's developing jobs —

FLEISCHER: But you know what? 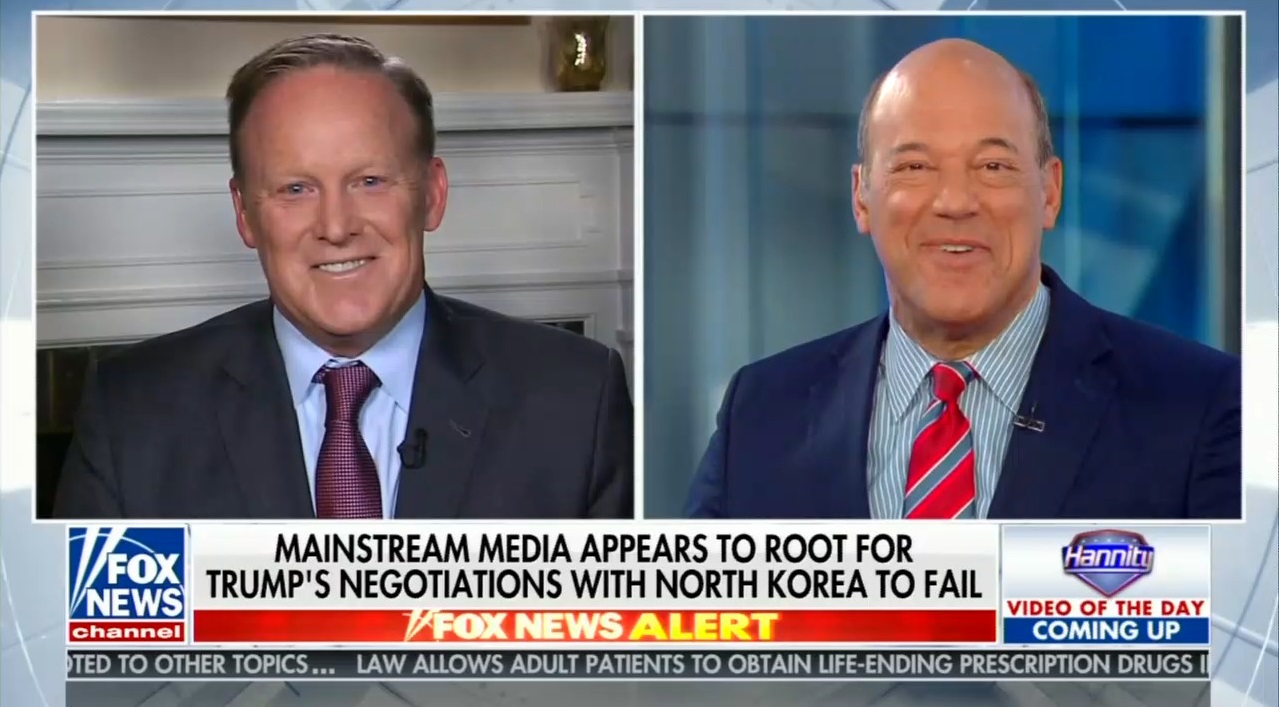 SPICER: But at the end of the day, Ari —

HANNITY: — crossing the DMZ, what about no rockets fired over Japan?

FLEISCHER: They covered the hostages but it was a one-day story. But this is again, Sean, my point about how the press is separating itself from the people that they rely on, depend on to buy their papers and news. Jill Abramson, the former executive of The New York Times said that every time Trump calls them the fake news, she hear the ching of the cash register as more people subscribe online. That's the curse of The New York Times because the people are subscribing online are so oppositional to President Trump.

HANNITY: And how do you explain the failing ratings of CNN?

FLEISCHER: The New York Times say they deliver the opposition. It's becoming the voice of the opposition. Newspapers, the media cannot be oppositional. They have to be factual and that's what's gotten lost.

HANNITY: How do you explain how horrible CNN has — by the way, I want residuals from CNN and MSNBC because they run me all the time. It's so unfair. They need to pay me. Zucker needs to pay me, but in all seriousness, they're not doing well with this. When did they — if I was — if I was watching a President give a speech and they were chanting “Fox News sucks,” I'd be, I might take it seriously after a while.

SPICER: You know, the funny thing on my end is, during the campaign season, I was very public. I gave a lot of credit to CNN in terms of how they covered the campaign, how they ran their debates and then, suddenly on January 11 when Jim Acosta decided to become a carnival barker, they decided to change their entire model and realized that their model is not to try to follow MSNBC and become the other resistance. 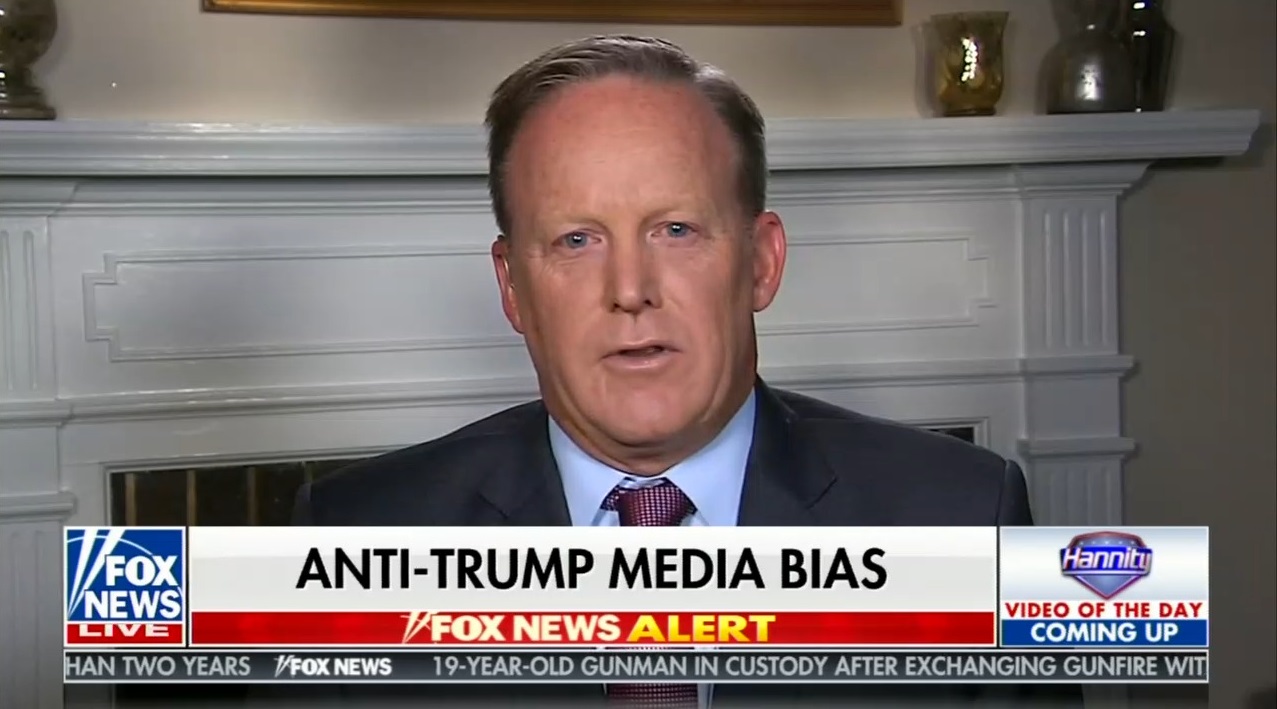 SPICER: And I think it's sad because they've made it personal and their ratings are suffering because of it and I think that they've gotten now —

SPICER: — every one of these hosts goes on air and tries to outdo themselves —

HANNITY: They’re all the same. Leftists.

SPICER: — as if Chris Matthews has become the model for them.

FLEISCHER: Yeah and the problem is the press’s job is not to be resistance, but they enjoy that role, they relish it and they always do it to Republicans and they particularly do it to Trump and it's going to get worse even when Trump’s gone.

HANNITY: Thank you both. Hard job you both have done. Amazing, actually.