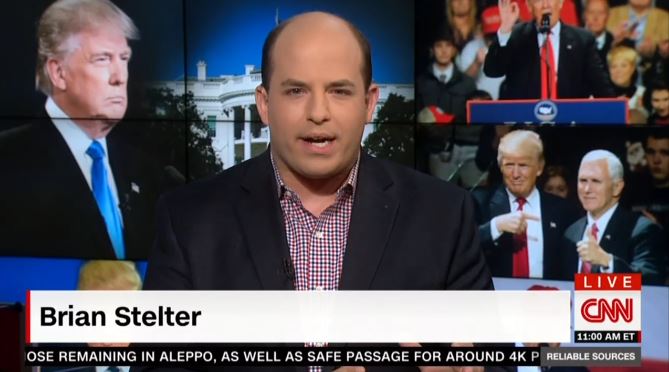 CNN’s Reliable Sources host Brian Stelter invited on HLN’s S.E. Cupp Unfiltered host S.E. Cupp for an illuminating 22-minute podcast released Friday dealing with conservative distrust in the news media. It featured solid points by Cupp and complaints by Stelter that mistakes in the media have been unfairly “amplified by some right-wing outlets as if the entire press is culpable.”

Unfortunately, there was no such discussion or acknowledgment by either one of them that a reason for conservative distrust in the media had been repeated instances of fake news, mass plagiarism, and/or scandals that did serious damage and called into question entire outlets.

In reality, Stelter should admit that those instances and subsequent rehabilitations for offending parties only further damaged the media’s credibility, but more on that later.

Starting from the top, Cupp was invited on to discuss her CNN.com opinion piece about the same topic. She expanded on the piece as to why conservatives had come to distrust the news media [emphasis mine]:

Ever since the advent of the media as an industry, I mean, forgetting, you know, the gum-chewer reporters of the ‘20's and ‘30's. When it became corporate and that happened when cities boomed and advertising agencies centered themselves in New York City and San Francisco and Chicago. The media became very much a coastal, urban, very elitist kind of project and it really, once it left those small towns and those Midwest hubs, those southern hubs, it kind of forgot about those readers and it sort of conceded media as a project for those readers and viewers and listeners to smaller newspapers and smaller, local — local news reporting. And, so, the big networks and the big newspapers really just kinda forgot what average Americans and by that I largely mean conservatives, wanted and cared about and thought about and so conservatives started to get very suspicious and skeptical of big media because it felt there was a disdain towards them. They weren’t living, you know, the right kind of life. Stay-at-home moms weren’t chasing their dreams like Mary Tyler Moore was and, you know, in the ‘60's and ‘70's. They were raising families. You know, they were too religious for, you know, mainstream liberal sensibilities and secularism that took root in liberal media. So, the suspicion is long, a cynicism, the skepticism, it is deep and that’s despite having prominent conservative thought leaders come in and out of the picture. So, conservatives are certainly open to media and you just have to look at Fox News to see how successful conservatives can be in media, but the suspicion is very deep-seated.

Stelter complimented Cupp for “linking distrust of journalism and distrust of mainstream news sources to ownership and entertainment and Hollywood, right” in that “it’s not just about whether a journalist and newsroom might have a left-leaning bias.”

He added moments later that folks like HBO’s “John Oliver, for example, has nothing to do with the journalism that’s made by CNN.” This, of course, he ignored the fact that such shows like Last Week Tonight are primary news sources for some consumers and the thoughts of comedians like Oliver and Jimmy Kimmel are routinely held up in the press as moral authorities. In fact, CNN is airing a special touting late-night comics bashing President Trump on Monday night. And who’s the host? Brian Stelter!

Continuing on, Cupp criticized conservatives for believing that “the media speaks with one voice” and ignoring the fact that “[c]onservatives do very, very well” in the media landscape thanks to Fox News and talk radio.

That being said, the issue is, yes, conservative media do have a seat the table. The problem is when it’s still five networks against one and droves of liberal newspapers against a handful of conservative websites, having one seat at the table seems almost irrelevant.

“It’s not that we have no influence or power. We have a ton. It’s just not aligned with where everyone else’s power is. Conservatives are almost powerless in Hollywood. Conservatives don’t get the same kind of sponsorships that liberal reporters and liberal TV personalities might get,” she added before giving an example of conservatives seeing bias in Rachel Maddow appearing on a late-night comedy show.

She continued on the theme of President Trump’s views of the media being so dangerous. However, she suggested that the President has only amplified "a clarion call for us to get better, to self-reflect, to look inwards" and ask “how can we limit these unforced errors?”

[M]istakes are going to happen. We’re human at the end of the day. Journalists aren’t robots, but when those mistakes happen, we have to admit them. We can’t do journalism by distraction, this sort of idea, well, that story’s important, but this one – this one’s more important because it happens to push the agenda that I want. We can’t do that. We just have to get better and I think, as we do, and as there’s more pressure on journalists and the media to get better, I think we will rise to the occasion.

That’s all perfectly valid plus something that most people could agree on. However, plagiarism has been the occasional scrooge in the media. Just look at Fareed Zakaria at CNN. He’s still gainfully employed and hosts the show prior to Stelter's.

When it comes to making things up, the list can go on and on. Jayson Blair at The New York Times, Janet Cooke at The Washington Post, Stephen Glass at The New Republic, Mike Barnicle at The Boston Globe, Dan Rather at CBS, and Brian Williams at NBC represent a few of the big names in journalism who have been caught falsifying personal experiences or stories over the years.

Unfortunately, too many were given slaps on the wrist and then welcomed back into the journalism community with open arms. Barnicle, Rather, and Williams are either gainfully employed by major networks or have become featured guests on the issues of the day.

For an industry in which honesty is paramount, the constant rehabilitation of disgraced journalists gives media skeptics all the more reason to distrust them. It’s difficult to demand accountability from the federal government and ordinary citizens when bad behavior results in little to no consequences.

With all of that being laid bare, Stelter responded by not going in this direction, but minimizing the mistakes the media have made into being “stupid mistake[s]” that, in his world, are “then amplified by some right-wing outlets as if the entire press is culpable.”

“[W]hether it’s something about a koi pond or whether it’s something about an MLK bust in the Oval Office, these things take on a life of their own where they get millions of page views about like someone’s stupid mistake and it seems, to me, that there’s this concer — the concern that I have is that small, dumb mistakes become these horrific scandals in the minds of some conservative readers because they’re exploited...It’s a diversion of clickbait,” Stelter added.

Cupp agreed, turning it back to Trump:

To Cupp’s credit, she cited the lack of government accountability in the past two administrations and how the previous one went after journalists (e.g. Fox News Channel’s James Rosen and NYT's James Risen):

CUPP: I don’t think they have to look inward. I think they have — they [aren’t] looking outward very much. They’re very much looking at the lack of accountability from government over probably the last two terms. Fair to say Obama and W. on both sides. A lack of accountability, a lack of honesty, a lack of transparency. Let’s not forget. President Obama was very hostile to the press as well. So, I think there’s — the distrust —

STELTER: I know people like to say that, but it’s not even in the same ballpark.

CUPP: It is not in the same ballpark, but —

STELTER: I mean, yes, there were awful leak investigations, but President Obama —

CUPP: Well, yeah, when you follow a journalist around, when you sic the DOJ on a journalist. That’s pretty bad. It is not the same level of hostility.

CUPP: Oh, I think it’s sowed a lot of distrust in the way that the executive office was meant to respect a free press and sort of let them do their own thing. I’m not make equivalences, but it is important to point out when administrations have attacked because it’s just as egregious someone else does it, it is egregious every time[.]

Stelter maintained that he disagreed with Cupp on invoking the Obama administration’s behavior, instead tacitly blaming conservative media (and possibly sites like this one) for continuing to tell readers “that these small incidents” of journalists making mistakes “are actually huge scandals.”

In the interest of common ground, Stelter stated one thing about chyrons that this space could get behind: “It may come back to the problem of the commercial model of media that every breaking news banner is the same size and everything is treated like it is apocalyptic when it’s not.”

For the latter stages of the podcast, Stelter observed that he “see[s] a lot of opining out there” and “less actual journalism from right-wing websites” while Cupp countered that there had been plenty of that thanks to sites like National Review and The Weekly Standard.

“When they are exposing that, I just think it’s more impactful and look, to certain Trump supporters, none of its impactful. None of it is going to change anyone’s mind and that’s just sort of maybe a reality we have to deal with, but still a very important project, I think,” Cupp stated.

Both agreed that there’s a segment of the population (i.e. many Trump supporters) that are “unreachable” yet hope that doesn’t last forever. Stelter bemoaned the lack of “consistency” from some (again, Trump supporters) in not being “consistent in our outrage.”

“Those are things that matter to you and I, Brian and we are here in New York City, sitting at Time Warner and that’s not unimportant. But I think I have had to sort of relearn the kinds of values that other news consumers have and you and I might take consistency at sort of the very least we should be demanding. But, for others, that they’re not so concerned,” Cupp responded.

Stelter admitted that he’s a pessimist when it comes to reaching those the pair had dubbed unreachables, but he admirably tried to end on an optimistic tone. Here’s a portion of their conclusion:

STELTER: And I’m not really optimistic on this point, but let me try to be for a moment. Maybe those folks we were talking about who might be unreachable right now who don’t want to hear the day-to-day news coverage of the Trump presidency, maybe having these big, fundamental conversations and including their voices is a way to reach them.

CUPP: Well, yeah, and that’s why — I mean, when Salena Zito goes out and reports on these people, talks to these people, shares their stories, I think that’s hugely important and having these kinds of conversations are, I think, in recognition of those people who felt — who felt really left behind when we were all talking about different things for the past eight years.