UPDATE, 7:36 p.m. Eastern: During Wednesday’s NBC Nightly News, Brian Williams issued an on-air apology saying that he “made a mistake” in what was a “bungled attempt by me to thank one special veteran” in reference to Army Command Sergeant Tim Terpak for helping to protect the downed aircraft as well as the one that Williams was traveling in.

Williams added that he hopes “our brave military men and women, veterans everywhere” know that “they have my greatest respect and also now my apology.”

On Wednesday, Stars and Stripes reported that NBC Nightly News anchor Brian Williams admitted to not being aboard a helicopter that was shot and had to be rescued following RPG fire during the U.S. invasion of Iraq in March 2003. Williams stated that he “feels terrible” and “was wrong” for not telling viewers that he was instead “on the Chinook behind the bird that took the RPG.”

The story comes after he reported on Friday's NBC Nightly News that he was reunited the day prior with the U.S. Army Command Sergeant who was put in charge of his NBC News crew after the helicopter they “were traveling in was forced down after being hit by an RPG” and had to be “rescued, surrounded, and kept alive by an armored mechanized platoon from the U.S. Army’s Third Infantry.” [See video of Nightly News from January 30, 2015 below]

In an interview with Stars and Stripes, Williams described his erroneous story as “simply an attempt to thank Tim [Terpak], our military, and Veterans everywhere – those who served while I did not” and that he “would not have chosen to make this mistake” if he had wanted to.

Looking back through the Media Research Center’s expansive video archives, however, Williams relayed a very different story. Appearing on NBC’s Dateline on March 26, 2003, Williams told host Tom Brokaw that the helicopter he was flying in had “[s]uddenly...been ordered to land in the desert” after “the Chinook ahead of us was almost blown out of the sky” by an RPG.

Upon landing, Williams and his crew shot footage of the hole the rocket had caused in “the skin of the ship, but amazingly, it didn’t detonate.” Due to the unsafe flying conditions, he said that they soon met “a unit from the 3rd infantry” because they were “called in, as it turns out, to protect us from the enemy.” [See report from NBC's Dateline on March 26, 2003 below]

He also added that “[a] massive sandstorm” caused the Chinhook crews to be grounded “for us two nights,” but were kept safe from enemy fire thanks to “[t]he infantrymen” who stood “guard the whole time.”

This is not the first time that Williams has gotten in trouble with U.S. servicemen and women. On MSNBC’s Hardball on August 10, 2006, he suggested that, like suicide bombers seeking to kill Americans, “there are guys on our team like that, too.”

The following day on NBC’s “Daily Nightly” blog, Williams said that his comments had “been aggressively misunderstood” and that “[t]he difference is” that (emphasis his): “[T]he folks willing to die for OUR country do so in the act of protecting and defending it – NOT killing civilians by detonating an explosive and killing innocent people.”

Here is the full statement from Williams to Stars and Stripes:

To Joseph, Lance, Jonathan, Pate, Michael and all those who have posted: You are absolutely right and I was wrong.

In fact, I spent much of the weekend thinking I'd gone crazy.  I feel terrible about making this mistake, especially since I found my OWN WRITING about the incident from back in '08, and I was indeed on the Chinook behind the bird that took the RPG in the tail housing just above the ramp.

Because I have no desire to fictionalize my experience (we all saw it happened the first time) and no need to dramatize events as they actually happened, I think the constant viewing of the video showing us inspecting the impact area — and the fog of memory over 12 years — made me conflate the two, and I apologize.

I certainly remember the armored mech platoon, meeting Capt. Eric Nye and of course Tim Terpak. Shortly after they arrived, so did the Orange Crush sandstorm, making virtually all outdoor functions impossible. I honestly don't remember which of the three choppers Gen. Downing and I slept in, but we spent two nights on the stowable web bench seats in one of the three birds.

Later in the invasion when Gen. Downing and I reached Baghdad, I remember searching the parade grounds for Tim's Bradley to no avail. My attempt to pay tribute to CSM Terpak was to honor his 23+ years in service to our nation, and it had been 12 years since I saw him.

The ultimate irony is: In writing up the synopsis of the 2 nights and 3 days I spent with him in the desert, I managed to switch aircraft. Nobody's trying to steal anyone's valor.  Quite the contrary:  I was and remain a civilian journalist covering the stories of those who volunteered for duty.  This was simply an attempt to thank Tim, our military and Veterans everywhere — those who have served while I did not."

The transcript of Williams’s on-air apology on NBC Nightly News from February 4 is transcribed below. 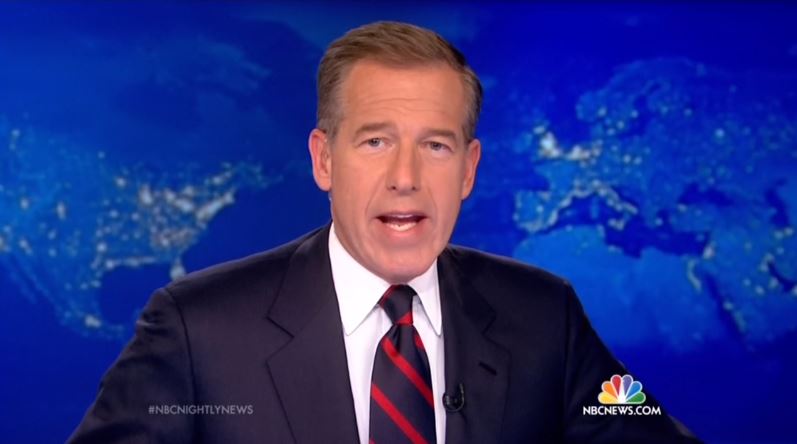 BRIAN WILLIAMS: On this broadcast last week, in an effort to honor and thank a veteran who protected me and so many others after a ground fire incident in the desert during the Iraq war invasion, I made a mistake in recalling the events of 12 years ago. It did not take long to hear from some brave men and women and the air crews who were also in that desert. I want to apologize. I said I was traveling in an aircraft that was hit by RPG fire. I was instead in a following aircraft. We all landed after the ground fire incident and spent two harrowing nights in a sandstorm in the Iraq desert. This was a bungled attempt by me to thank one special veteran and by extension, our brave military men and women, veterans everywhere, those who have served while I did not. I hope they know they have my greatest respect and also now my apology.