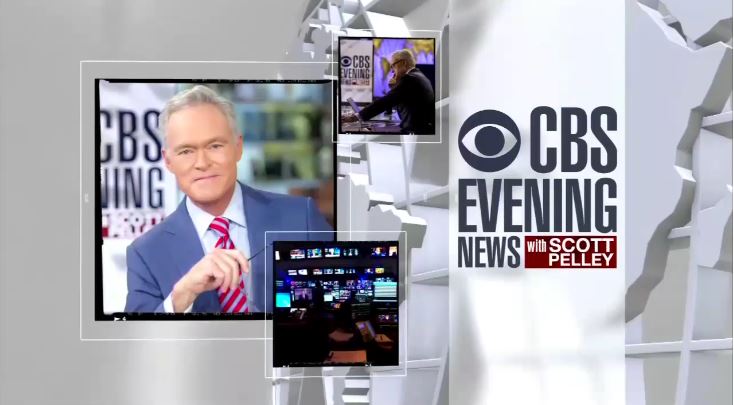 UPDATE, 10:46 p.m. Eastern: Since the Page Six exclusive broke the news at 8:52 p.m. Eastern, a number of other media reporters have confirmed that CBS News has axed Pelley from CBS Evening News.

Politico’s Hadas Gold tweeted “[y]ep” when retweeting the Page Six item and liberal CNN senior media reporter Dylan Byers confirmed it with a story of his own, noting that the canning is effectively immediately.

She added later in another tweet that “yes, page six report on scott pelley out as CBS Evening News anchor is true, though i'm being told he'll get a chance to say farewell.”

Here’s a portion of Byers’s item:

The departure, first reported by Page Six, had been in the works for some time, the sources said, and was due in part to the fact that Pelley was struggling to generate ratings.

A CBS News spokesperson declined to comment. The network is expected to make a formal announcement on Wednesday.

Pelley is currently on assignment for "60 Minutes" and had not hosted "Evening News" for several days. Sources said Pelley personally asked to have his office cleared out on Tuesday even though he was out of town.

Byers speculated that senior national correspondent, CBS This Morning: Saturday co-host, and frequent fill-in anchor Anthony Mason will likely be the temporary anchor until a permanent one is found.

Currently, the two editions of CBS Weekend News are anchored by Reena Ninan and Elaine Quijano on Saturday and Sunday, respectively. Along with CBS This Morning’s Charlie Rose and Norah O’Donnell filling in on CBS Evening News, past substitutes have included: James Brown, Maurice DuBois, and Jeff Glor.

According to the New York Post’s Page Six, CBS News has decided to remove Scott Pelley from the anchor desk of CBS Evening News, capping off a stint that began in 2011 when he took over for the largely disappointing tenure of liberal former Today co-host Katie Couric.

The story also stated that Pelley will remain at 60 Minutes, where he has been a host since 2003.

Page Six’s Oli Coleman and Emily Smith has more in their exclusive story:

Sources tell us that ‘Poison Pelley’s’ office was being cleared out on Tuesday while the anchor was away on an assignment for the network’s news magazine “60 Minutes.”

We’re told that he’s being shifted permanently to “60 Minutes.”

Insiders tell us that CBS News president David Rhodes “is making [Pelley] move to ‘60 Minutes,’” and that the pair “don’t get on.”

Another TV insider said while Pelley’s ratings have been down, “There’s also been friction between him and [Rhodes].”

Added a source, “[Pelley] was pushed out of the ‘Evening News.’ It’s been coming for a long time. This could have been handled better — [Pelley] is away on a story, and they’re cleaning out his office. It’s not the correct way to treat the face of CBS news.”

This story would make sense, as Jeff Glor filled in for Pelley on Monday night’s newscast with Glor stating at the top of the newscast that “Scott is on assignment for 60 Minutes.’”

Coleman and Smith added that the network has not yet decided on a replacement and vividly described the alleged abrupt cleaning of Pelley’s office:

Sources say there was confusion on Tuesday among staff at CBS’s Hell’s Kitchen headquarters as workers began dismantling the office of Pelley — dubbed ‘Poison Pelley’ by Page Six after he yelled at a reporter in 2013, “You wouldn’t last 10 seconds at CBS News!”

Others insist Pelley is moving to the “60 Minutes” offices.

The timing is also intriguing as Pelley has loads of positive press for his anti-Trump zingers and liberal positions throughout the presidential election. Just in April, my colleague Rich Noyes showcased Pelley’s anti-Trump tilt while others sang his praises.